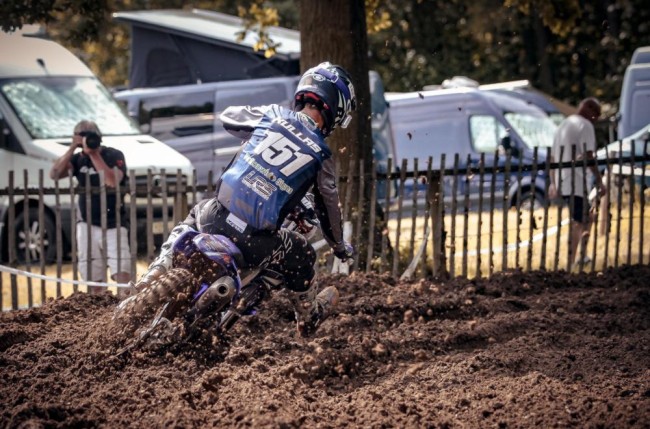 Harri Kullas took the overall MX1 win with consistency on a day of drama at a superbly prepared Canada Heights. Race one was a crazy affair with Jake Millward leading the best of Britain and winning straight up in the performance of his life as the excitement took place behind him! Millward had Searle, Walsh, Simpson and Kullas all on his tail as things got close on a tight track and ultimately too close for Simpson who looked back on top form when he collided with Dylan Walsh and ended up on the deck!

Searle and Walsh then went to battle but they both hit the ground with a couple of laps to go leaving Millward with breathing space. Kullas was up to second and Simpson back in the game in third with the Scot then passing Kullas to take an unlikely second place after the Walsh altercation! But the rivalry wasn’t done with as Walsh and Simpson exchanged some heated words after both appeared to blame each other for the clash with Simpson saying Walsh was making questionable moves for a British championship event.

In Race two there was no drama for Walsh, who after switching to a scoop tyre, took the holeshot and the race win despite some late pressure from Harri Kullas who was in the mix all day. Tommy Searle took third to stay very much at the sharp end of the championship but it was frustration for Shaun Simpson who started outside the top ten and had to work very hard to get back to fifth. Adam Sterry took fourth in race two after a hard first race that saw him hit the deck in turn one and ride all the way back up to eighth.

Stuart Edmonds rode fantastic for sixth in race one with Liam Knight and Brad Todd shining in race two and all three deservedly top ten overall.

It was an unpredictable MX2 day with Conrad Mewse not feeling great leaving the door open for everyone to go for the win! A bad start for Mewse in race one left him struggling to come through into the top five as Wilson Todd got the lead and set sail just two weeks after arm pump surgery. But with a ten second lead over pole sitter, Ike Carter, Todd unbelievably fell twice and let youngster Carter into the lead! Dickinson took over second with Todd back on the tail of the pair of them in third. Carter looked like he would hold onto the win until, with a lap and a half to go, he made a mistake in the rollers, lost his momentum and Dickinson sped past for take the lead with Todd passing Carter a couple of turns Leatt for second. Todd proceeded to put the pressure on Dickinson but the KTM man held strong to take a brilliant win from Todd and an impressive Carter. Liam Everts worked his way into fifth behind Carpenter with Mewse back in sixth.

Race two and it was Mewse and Todd outside the top five with John Adamson and Steven Clarke up front! Mewse this time found some extra lace and gradually worked his way into the lead only to stall and drop back to fourth behind Todd, Adamson and Clarke but then Adamson went down with Clarke in the lead as Mewse had to try and pull through again. He made the move on a tiring Todd and them leapt past Clarke to regain the lead and salvage the day with a hard-fought win.

“I had to dig deep today,” said Mewse. “I was sick all week and came into this race really flat. Today was one of my bad days but I capitalised in moto two.”

Clarke said he was just happy to be so close to Mewse and to be up front after crashing early in race one while Ashton Dickinson took his first overall backing up his first moto win with a fourth just behind the top three in race two. Liam Everts came from the mid-teens up to sixth in another strong performance just behind Ike Carter who was flying all day.