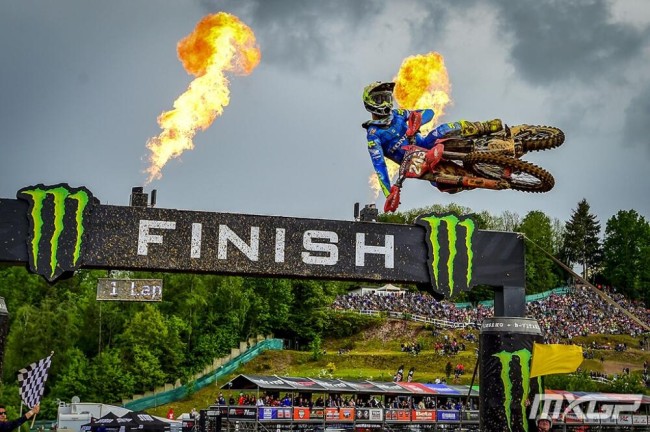 Just too good. That’s the three word review of Tim Gajser not just in Maggiora, but all season long. He is champion elect already and the Slovenian is probably in the best form of his career.

Yet again his line choices were impressive in Maggiora with the ruts and mud, as was his urgency in the first few laps of race two to make key passes on closest rivals, Renaux and Seewer, before cruising to an easy win. Gajser is simply fantastic with no weaknesses in his armoury.

Maxime Renaux finally got the starts but even he couldn’t do anything with Gajser on race day even if he did show his potential winning the qualifying moto over Tim. Renaux isn’t intimidated by Gajser but right now he’s still searching for that little bit extra to run Tim’s pace for a full 30 minutes plus two. But he’s close and the good starts he showed in Italy will be key to getting even closer this season. Renaux is second in the championship now and having a great year.

Jeremy Seewer was also very strong if a little loose at times! But he got the job done, beating everyone except that man Gajser.

Right now, it’s looking like the mid 90s with McGrath in supercross, everyone is scratching their heads trying to figure out what they need to do to beat the man on red. This time it’s Tim Gajser…and it’s unlikely he’s going to Suzuki next year like MC did in 97! Gajser is reportedly on the verge of re-signing with HRC Honda and the Japanese are clearly not wanting to make the same mistake they made with McGrath in 97 and then Carmichael in 04 by letting their main man go.

A big positive of the weekend was Ben Watson, who ride fantastic on race two for fourth after leading the opening laps. Ben and the team needed that badly and it was great to see the Brit on the pace he is capable of.

Calvin Vlaanderen also took a rare holeshot in race one – and even admitted he didn’t know what to do with it! But like Ben he showed some good pace before taking fourth, unfortunately the start wasn’t quite as good in race two but Vlaanderen showed he’s very close to the top guys when he gets away with them.

MX2 was the Geerts v Vialle duel plus some new names up front! Geerts rode fantastic both motos winning race one but closing right in on Vialle in race two was also impressive. He made his point that he’s got the speed on the Frenchman so far this year but Vialle showed mental strength not to give in and take the win.

Stephen Rubini got a well deserved second in race two and he even kept Geerts honest! A hard battle in the mid-top ten in race two delivered sixth and enough points to take third on the box. It’s been a long time coming but very much deserved for Rubini who has battled a lot of injuries.

The Hitachi KTM team made the decision not to race the British championship and go to Maggiora and it proved the right call with both riders impressing!

Isak Gifting took a fine third in race one then came from the back in race two.plus another crash to take 7th overall on the day.

Kay Karssemakers was a revelation – especially in race two! He ran second in the opening laps until he tipped over but then rode in fourth for most of the moto with some heavy hitters behind him. He eventually ended up ninth but for a kid on a 125 last year and not long back from an injury, his weekend was mightily impressive and shows the level of his talent. Hitachi have assembled a strong and exciting team in 2022.

Liam Everts also had a good day taking fourth on race one and eighth overall, the Belgian getting a feel of the front of the pack and looking very comfortable racing with Vialle and de Wolf.