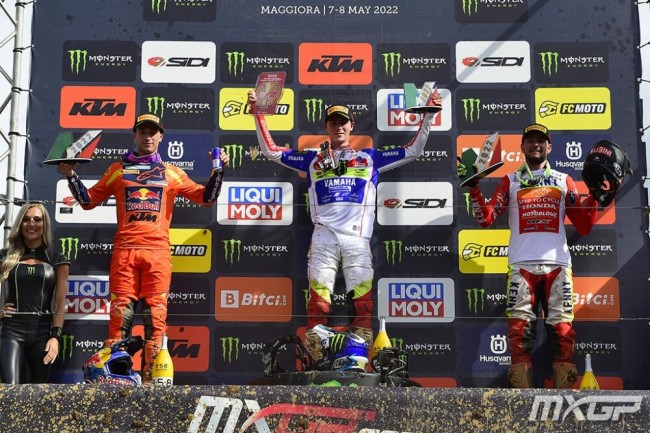 Jago Geerts: “Yeah it was a really good day for me. First race, I got a good start and I was feeling good. Didn’t make too many mistakes. And then the second heat, in the first 15 minutes I was struggling a bit with the track, but after that I found some good lines and in the end had a battle with Tom but I finished second. Really happy about today and looking forward to the next race in Sardegna”.

Tom Vialle: “I couldn’t do so much; I didn’t have a bit of luck in the first race. I had a good start but then Mattia went on the inside, then into my rut and the bike turned around for him, so I was stuck and dropped quite a few positions. I was pretty far behind but came back to fifth. In the second race, I didn’t get the holeshot but I was first, Jago was pushing really hard in the end but I could manage to win the second race so I’m quite happy. There’s some positives to take away”

Stephen Rubini: “It was a really positive weekend, especially today on Sunday. We managed to do two good starts and to battle in the front is just so nice. It’s finally where I wanted to be, fighting at the front in the first race, putting in some good laps and catching up to Jago. And actually, after the second race I didn’t know I was on the podium until my friends told me and I was just relieved to know, it’s been quite a few long years. And I’m happy to finally be where I want to be”.