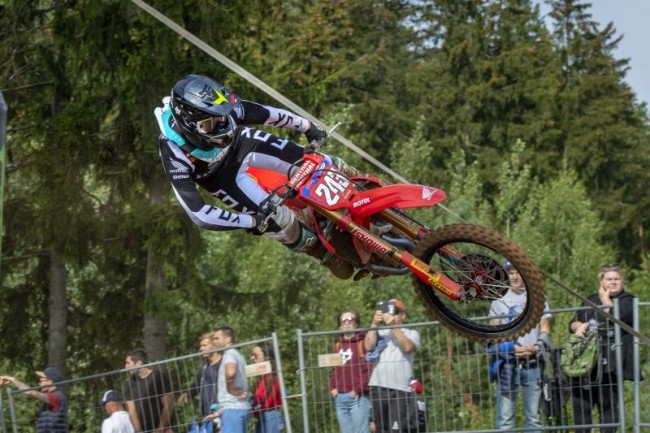 Good things come to those who wait! That was very much the case for Tim Gajser in Latvia as the Slovenian learnt the lessons from all those crashes in the pervious three motos to ride two strong but steady races at Kegums, on a curiously fast but tricky track that, even if is kept getting levelled, was still challenging due to the inconsistent and hard base under the sand.

Gajser took advantage of Herlings costly crash two turns from home to go 2-2 and take a crucial GP win to stop the bleeding in the points and steady the ship. This was a huge win and you have applaud Gajser’s ability to perform to that level under pressure created by crashes in the previous GPs. He needed that one.

But Jeffrey Herlings will wake up this morning full of regret and frustration. He had the win in the bag and controlled race one over Gajser to win by ten seconds, and then that crash with a couple of turns to go ruined all his hard work throughout the day. He should have been 37 behind Gajser but left 43 behind with hard pack coming up. Yes, he should be pain free by Turkey in a month’s time but he’s going to have to start consistently taking points of Gajser every week to be in with a shout of this world title at the end. But at least he still has a shot at it after what happened at Oss!

Jorge Prado wasn’t racing to make friends in Latvia! The mentally strong and singularly focused Spaniard nearly put Herlings and Cairoli off the track in race one with Cairoli angrily gesturing to his teammate once he finally made an aggressive pass stick on his younger stablemate. Prado just doesn’t care one jot, he’s there to win and his second moto victory was a demonstration of mental focus and ability under big pressure from Herlings. Prado got the job done and says he is getting his physical condition back after Covid and now he has a month off to really ramp up his fitness.

Tony Cairoli will rue his second moto crash but he at least got back to sixth to keep himself from losing too many points on the day but he is down to fourth in the championship. Romain Febvre will be going home wondering what could have been after he crashed again, this time while leading ending his chance of getting some points back on Gajser in the championship. With a month to fester on the success and frustration the championship contenders will all have Turkey on their minds already – but Gajser will be the most relaxed after he got an unlikely win and extended his lead to rebalance the disaster than had been the previous three motos.

This MXGP series is a tightrope of needing a lot of speed but not having too much that you crash and throw away your shot at the championship. For all five contenders this series is still on a knife-edge and they are all trying to find the right balance.

MX2 was all about Maxime Renaux! This was a the best ride of his career and proof that he is very much the guy to beat now for this title. His bad days are not that bad and he has proven now his good days can be spectacular as he passed his main title contender, Guadagnini then held off Geerts in race two to secure a brilliant double victory and increase his championship lead to 34 points over Guadagnini and 36 over Geerts – he is taking control and laying down the gauntlet to his rivals. What a performance from the Frenchman.

After four races in a four weeks, all the riders will now wait for a month to recommence the rest of the series. The battle lines have been drawn and everyone knows what they have to do now to be champion heading into the second half of the year – and that’s when they will really have to deliver under pressure to accomplish their dream.

Podcast! We look back at the latest MXGP round in Latvia and discuss that crash by Herlings, Gajser’s win and Prado’s mental strength and aggressive moves plus MX2 and EMX250. Get it on iTunes here, or Spotify and YouTube below: