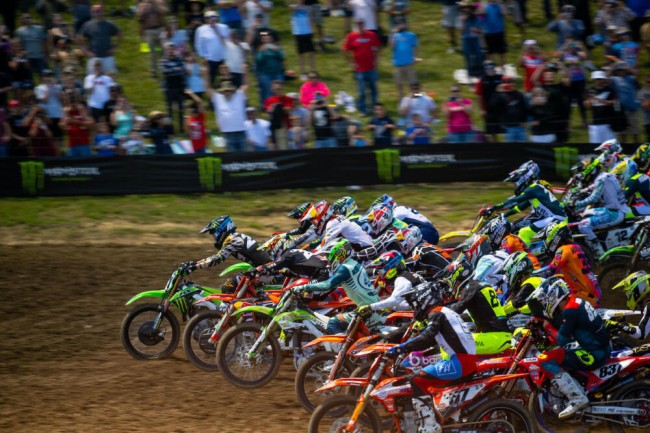 That was a very frustrating way for Antonio Cairoli’s AMA National adventure to end. Still fighting for a contract that is currently not forthcoming to do the full series, Cairoli ended up with a double DNF and a slight knee injury on a day when a podium was absolutely possible after qualifying in the top five on a track he’d never ridden before – the fantastically sweeping, slightly undulating and rutted Mt Morris circuit.

But again, the first couple of laps hurt him, dropping from fourth to seventh, with Craig one the the riders’ passing him early. It meant Cairoli was attempting to re-pass Craig, no doubt frustrated at again losing places early in the race when the main race pace was there to be a podium contender, he made aggressive contact on the American but it was the Italian that hit the dirt and was out of the race.

Your starting gating is, for some bizarre reason, based on your first moto result in the US, so that left Cairoli on the very outside gate for race two and led to him getting pushed off the track at turn one and waiting to re-join right at the back of the pack. Despite getting up to 13th in ten minutes, Cairoli pulled out with his damaged knee, ending a day that promised so much but was all ruined from that collision with Craig leading to the terrible gate pick in race two.

Cairoli has in some ways been dealt a difficult hand racing in the US, not getting paid to do it and only three weeks notice that he could actually do the first couple of races, you have to wonder how he even got himself into the pace of the top five with no physical preparation, only one 30 minute moto, a different frame and new tracks as he approaches 37 years old in a couple of months. All things considered he had been doing well and was only going to get better so it’s utterly baffling that KTM have not given him the green light and some sort of salary to race the rest of the year when top five in the championship was still realistic.

Even more confusing is that Red Bud is a track he knows and wants to race the MXoN at again in September, is next on the schedule in two weeks, followed by the relative sand of Southwick and Millville, and yet, those are the races it looks like he won’t be behind the gate for (as things stand)! America will probably see a much improved Cairoli in terms of fitness and aggression by MXoN time but it would have been nice for KTM to let him race the full series as a thank you for all that he has done and won with the brand, and let fans all over in the US get to see him race in person as he worked his way into race fitness and his real speed – because they haven’t seen it yet!

Back to the racing, and Eli Tomac won his first overall of the season over Chase Sexton and it looks like those two are now starting to set themselves as the benchmark and title contenders for the series. Anderson and Roczen aren’t too far away but the odd moto outside the top 5 won’t work for a title when Sexton and Tomac are up there every week now, especially when it looks like Tomac is really starting to flow on that Yamaha now.

Ryan Dungey came alive at High Point and had his best ride since Hangtown! Bad start or good start he and Ken Roczen found each other in both motos and went to the last lap each time in entertaining duels, Dungey looked like he hadn’t been away for five years at all and it’s testament to his fitness and determination that he is doing so well but it also shows what 3 months prep on the bike you are going to be racing can do – Cairoli must wonder if he could have been a title contender if he had that prep!

The 250 class was some epic racing between the Lawrence brothers for the overall win, reminiscent of recent duels until the final lap with Jago Geerts and Tom Vialle! It was a case of coulda, shoulda woulda for Hunter but those couple of laps when backmarkers slightly interfered with the race gave Jett that 2 second gap that proved too much to close in, even if Hunter’s last lap was pretty amazing to get on the back wheel of Jett and almost make the move. But yet again it was Jett winning, and that is the mark of a champ, delivering under pressure when the margins are tight.

Jett just has the ability to deliver when he needs it most, even when he isn’t the fastest. His composure even at 14 wining at Assen in EMX250 against experienced and fast riders stood out to me back then that he had something special mentally, Jett was just born with that cold mind in the heat of battle aligned with unshakeable self-belief. He has the skills, but performing under pressure is key to being elite as well and Jett has both sides covered.

To coin an Americanism, Jett is “clutch.” That’s three rounds in a row you could argue Jett wasn’t the fast or at least much faster than his closest competitors, yet each time he has won the overall. That’s impressive.

For Hunter, you could see the frustration when he came over the line and took his helmet off, he knew he could have won that race and it was another missed opportunity to close the points gap down in this title fight. It’s going to be fascinating to see how both boys (and the parents) handle the title duel as the tension increases especially as they train together during the week too with Johnny O’Mara. It’s a unique situation and dynamic at that level to have two brothers fighting for a major title and it makes the title battle even more intriguing with eight rounds to go.