Previewing the 2022 Paris Supercross – Saturday will be sold out 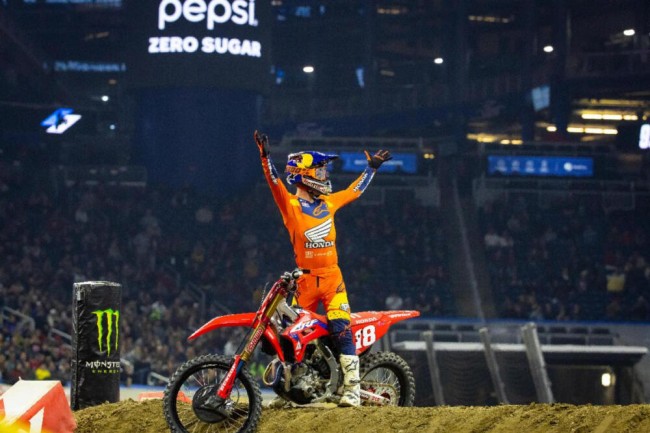 After a year ‘off’ in 2020 following the pandemic and a return last year on a unique evening, the Paris Supercross is preparing to reconnect with its prestigious past on November 12 and 13. A fine line-up of champions will do battle for two evenings in the Paris La Défense Arena, and the fans were not mistaken since Saturday evening will be sold out.

For its 39th edition, the only European Supercross to have gone through the years without losing any of its splendor is therefore sold out for its first evening, the fans having shown very early in the summer their enthusiasm for this unique event in Europe mixing races, shows and entertainment. It must be said that the poster gathered for this edition is one of the most beautiful since several American stars, including the last two US Supercross champions and the last winner of the Paris SX will line up behind the grid of departure!

For his fourth participation in the event, Eli Tomac, winner in 2004, returns to the capital with trophies after having won the US Supercross and Motocross championships this year while participating in the US success at the MX des Nations! Eli rarely leaves the American continent, but each time he has come in recent years he has left with the winner’s trophy, with his last foray into the old continent being the Cardiff SX which he of course won! In Paris, he will find old acquaintances in the form of Cooper Webb, US Supercross champion in 2021, and Marvin Musquin, three-time winner of the Parisian classic (2016-17-21) and fresh winner of the Red Bull Straight Line. If he has not yet faced them on equal terms – they were competing for the 250 championships until then – Eli also knows Hunter and Jett Lawrence, the two young Australians who are the revelation of the season, in the USA as well as in the MX des Nations where they hoisted the Australian flag on the third step of the podium behind the United States and France. It’s up to us that four of the riders who made the MXDN podium at Red Bud will be in Paris on December 12 and 13, namely Eli, Marvin and the Lawrence brothers!

The French at the rendezvous

For nothing in the world would the best tricolors miss the Paris SX, and in the wake of Marvin Musquin, who has been playing in the USA for many years, the pillars of the French SX will be behind the starting grid. Dauphin of Marvin last year, Cédric Soubeyras will once again be the leader of the French delegation with Greg Aranda, Maxime Desprey, Thomas Ramette, Anthony Bourdon, Adrien Escoffier and Julien Roussaly at his side. Many in SX1, the Blues will be even more numerous in SX2 since Paris is one of the stages of the SX Tour championship of France; the first ten in the provisional classification (after three events Brice Maylin is leading the way ahead of Lucas Imbert and Yannis Irsuti) will therefore be there, alongside several distinguished guests – Americans and Europeans – selected by the organisers.

A Supercross without FMX would not be what it has always been, and on this side it is still a beautiful European plateau which has been brought together with the indestructible Spaniard Edgar Torronteras, the young Belgian Julien Vanstippen, the Swiss Matt Rebaud and Frenchmen David Rinaldi and Nicolas Texier. All these tightrope walkers will perform twice each evening, their last performance preceding the SX2 and SX1 finals which will allow the new ‘Prince’ and ‘King’ of Paris to be designated!

Races, shows, music, games of light, the Supercross de Paris is experienced live in the Arena de Paris la Défense on Saturday November 12 in the evening (start of the show at 7:00 p.m.) or Sunday 13 (start of the show at 3:00 p.m.), all tickets giving the possibility of attending the tests. If there are no places left on Saturday, tickets are still available for Sunday with a first price of 51 euros. More information and seat reservation on the website https://www.supercrossparis. com