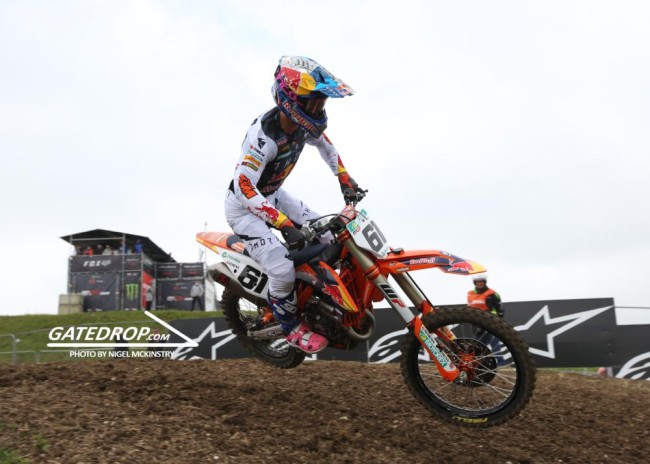 Two rounds into 2021 MXGP and Jorge Prado is waiting to grasp his first podium trophy of the campaign. The double MX2 world #1 is tackling his second season in the premier class and with the Red Bull KTM 450 SX-F. He posted seven rostrum appearances in eight rounds during 2020 until he tested positive for Covid-19 and had to miss the rest of the condensed championship.

Prado has so far scored 9-8-2-7 in the four motos in Russia and Great Britain and was unable to burst into the top three at Matterley Basin after dropping out of the fight for the top three in the second race. The Spaniard admitted that the flatter English soil was less technical than he expected (the track had been prepped to cope for the heavy showers that was forecast and the rainfall eventually arrived several hours after the Grand Prix had finished) and his suspension configuration limited his possibilities.

“Physically I felt strong in the second moto, which is positive for the next few races, but I didn’t have the feeling with the bike or the set-up,” he said. “It was too difficult for me to turn, open the gas and go with the others when they were full-on. I was too slow, even taking some risks. So, we need to look at that. We will keep working. It will come. I’m in the right place.”

Prado was sure his base set-up could adapt to the conditions but ended up being frustrated as teammates Tony Cairoli (1st) and Jeffrey Herlings (3rd) both entered the top three. Prado is currently 7th in the championship standings and 25 points behind leader Tim Gajser.