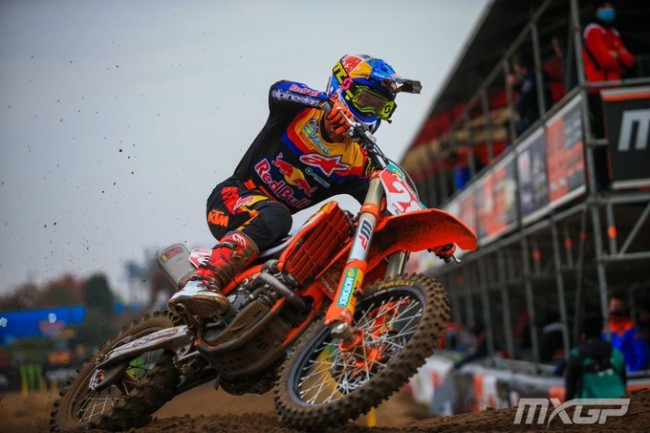 Red Bull KTM showed their feel for signing a great prospect when they signed the relatively unknown Tom Vialle (at least outside France) when Tom finished eighth in the EMX2 championship in his first season outside France.

But Dirk Gruebel, Joel Smets and Pit Beirer spotted something special in the youngster and he was invited to a KTM try-out day – and got the ride!

“Absolutely I’m impressed, admitted Pit in our exclusive interview. “I’ve been impressed by him for I think it’s three years ago we came closer to him. We watched him in races and when Dirk Gruebel and Joel Smets first came to me and told me the name, they said this is a talent we should really look after. We said, okay, he looks good, there is a nice riding style and we see potential and then he came on-board.

“How he developed in this short time is very impressive. You almost said it all, you can see he has a nice riding style and he is not on the limit yet. The body will grow and he will become stronger. But already last year he was a fantastic rider, but not the guy who could be super brutal or strong. Already then he was impressive because he didn’t go over his limits but showed already he was a really top, top rider.

“In our team when you become the leader of our 250 class, and that’s what happened for him when Jorge moved class, it meant he was in the front row and with that comes a certain pressure – without telling him. We will never tell a rider he must win the title for us but they feel it. Now they are in the position where they get all the support and they feel it and under that pressure he mad another incredible step.

“He performed all the time, under pressure he was performing and that’s where you see a big difference between champions and good riders. If the pressure is getting higher, even later in the season when we come to Lommel, this could have been a critical point. the homeland of Jago, but Tom made the gap bigger to Jago! In very difficult moments he showed his strengths. He had many, many good starts but in the times when it came to show, okay I want to be world champion, he had an okay start 4th/5th and he made the passes immediately. He’s a really, really great rider.

“I think once you are world champion you go home and look at the papers and you almost cannot believe it, so for sure we will see another boost. Okay you have seen one hit wonders, they enjoy that and that will never come back but his family and himself, they are completely different, so I am sure this will give him a great platform and a boost for the future. He is still so young, his body has for sure not developed 100% for a professional athlete so if he continues to work hard like he is doing, he will become stronger in the next years so I think we haven’t seen the limit yet of this boy.”