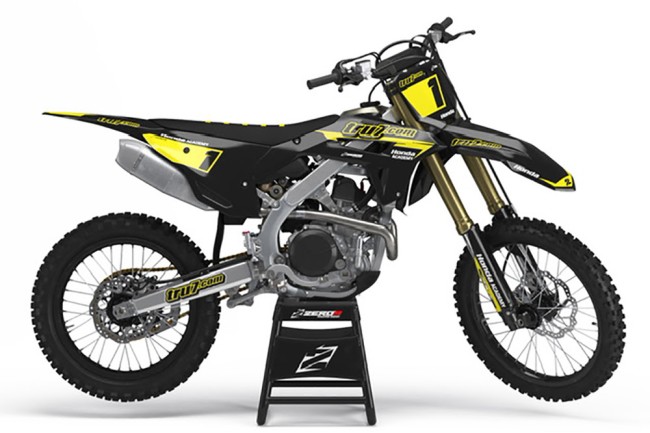 Two up-and-coming riders will form the new Tru7 Honda Racing Academy team in 2023. Charlie Heyman will race the Honda CRF250R in the MX2 class while Callum Green makes a return to Honda on a CRF450R in the MX1 category.

The team will to be managed by triple world 500 champ Dave Thorpe, running alongside the current Crendon Fastrack Honda squad which will announce its 2023 riders soon. The team’s former rider Jake Nicholls, managing director of the Tru7 Group, will be coaching and supporting the Academy riders.

Heyman will race in the MX2 British championship and also in the MX Nationals Expert class. He was also contest several European championship EMX250 races.

He is having an incredible year in 2022, his last on a 125. The 17-year-old has already won the ACU British championship and the MX Nationals title although there is still a round to go in both series.

Heyman has won 15 of the 18 motos in the ACU British series in 2022 and has been on the podium at every round. And in the MX Nationals he has been unbeaten, taking 20 race wins out of 20 so far.

The rider from Nottingham has had an incredible youth career, winning in the 65, 85 and 125 British championships. This year he contested the EMX125 round at the British GP and was best British finisher in ninth.

Callum Green makes his return to Dave Thorpe’s team after he had a long time off the bike to recover from knee surgery. Back in 2018, he won the MX Nationals title in the MXY2 class for the squad. The former 125 youth champ, now 22 years old, will race in the MX1 class in the ACU British championship and the Experts class in the MX Nationals.

Dave Thorpe said: “We have so many talented young riders in this country and the new team set-up is about supporting them and helping them onto the next level. With Charlie, he has shown incredible speed and determination for many years, which is why he has been so successful in winning championships in every youth class.

“Now he is moving up to adults with the Tru7 Honda Racing Academy team, he’ll have the backing and the bike which will give him a great foundation to work from. I believe he is destined for great things, especially now he is riding for Honda.

“It’s also great to welcome Callum back to the fold. He was a title winner last time he rode Hondas for our team and after having a few tough seasons, he’ll be back. With the backing from the team, he will have all the tools he needs to really make his mark in the MX1 class.”

Jake Nicholls said: “I’m really pleased to be involved with the new Tru7 Honda Racing Academy team. Our family company Tru7 has supported racing for many years and we are in the fortunate position of being able to help. So it’s great to step back into racing and get involved sponsoring a team of younger riders.

“I feel strongly about bringing on young talent and I feel this way with my experience, I can really add value and help them become well-rounded in all aspects of the sport.

“And at some of the tracks I might turn up, throw a set of kit on and have a go myself! I’m excited to be involved and with whole team and I’m looking forward to a fun season.”