Never give up attitude pays off again for scrappy supercross racer 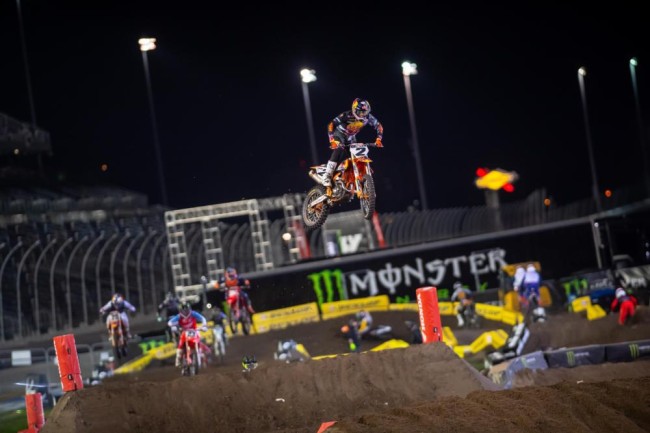 Ellenton, Fla. (March 9, 2021) Professional athletes give it their all, but there is also that balance of dialing back the intensity in the closing moments of events, particularly high-risk sports such as Supercross racing. Today, Supercross race lengths are determined first by a race clock to prompt the white flag coming out, then one additional lap beyond that. But often, particularly in the case of KTM’s Cooper Webb, that ‘plus one’ lap can make all the difference.

Webb’s pattern started during his title-winning 2019 season, when the racer from North Carolina switched teams and really found his stride in the premier class that puts 50-plus horsepower dirt bikes onto the most technically challenging tracks inside stadiums across the country. That season, a final-ditch pass in the final corner at the Arlington round gave Webb a Supercross win by the slimmest margin in the sport’s history – a mere .028 seconds.

Webb has continued the habit of picking up an extra position when all the riders are at their most fatigued and the track is in its worst rutted-up and broken-down state. It happened at round three this year, when Webb took his first victory of the new season, and he pulled the move again this past Saturday night not for the win, but to gap another rider between him and the current points leader, Honda’s Ken Roczen.

At Daytona on Saturday night the top two racers seemingly locked in their positions, Webb put in a final-lap charge, coming within .021 seconds of his own best lap of the race and passed second place rider, Yamaha’s Aaron Plessinger, exiting the final corner to take the position by a margin of just two thirds of a second; it was good for two additional championship points.

Webb’s finish follows two wins in a row. But series-leader Roczen is also recently off a win streak; he ran the table at the Indianapolis triple-header. The top two riders now sit with only two points between them and eight races left on the schedule. Next up is a triple-header over an eight-day stretch inside AT&T Stadium in Arlington, Texas starting this Saturday, March 13.