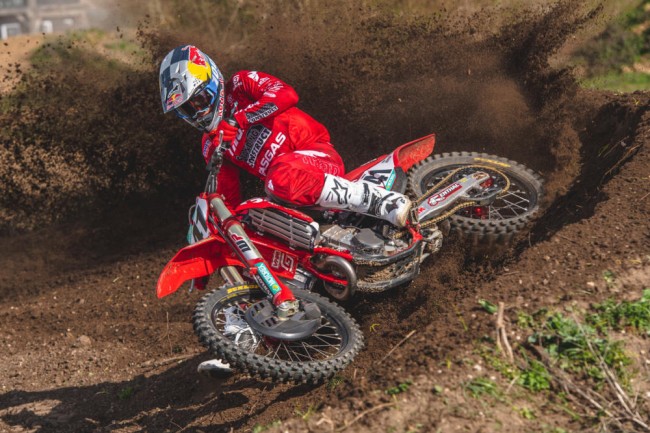 Pauls Jonass: He missed most of last season after breaking his back and numerous other bones but lets not forget Pauls Jonass is a former world champ who was really finding his groove on the 450 until injury hit. Always under the radar even when he won his world title, Jonass the perennial underdog but the dedicated, quiet Latvian is, I believe, an elite level rider once he gets his confidence and some momentum going in MXGP.

A change of team to Gas Gas and the responsibility of replacing Glenn Coldenhoff in the team are big shoes to fill but the Standing Construct team are always very, very good and making riders feel comfortable and extracting their full potential on the track thanks the environment they create off it. Pauls is in a good team that should suit him, he’s healthy and still has a factory bike, he could surprise a lot of people in 2021.

Ben Watson: Although he is yet to make his competitive MXGP debut, Watson has shown signs of brilliance on the 450 already, beating Herlings in a moto at Lyng and showing competitive speed with the factory boys at Ernee. Two great teammates in Glenn Coldenhoff and Jeremy Seewer, who have gradually improved every season will no doubt be of great help to Watson off the bike as well as getting to ride with them to see the pace he needed to have over the winter. But Watson has shown already he looks very at home on a 450, a languid, loose style even battling Herlings shows just how good he feels on the bike and if he can nail the starts Watson could establish himself as a big name in the class.

Ivo Monticelli: There was some controversy when Ivo Monticelli got the factory Kawasaki ride, with acustations that money was a factor in getting the spot but let’s be honest – Ivo has a lot of speed! The Italian was very good at Standing Construct and his consistency improved each year. He looked fast at Ernee on the Kawasaki and although sustaining his initial pace for the entire race isn’t always there, he knows how to get a start and if he can find that race pace over 30 minutes he will be one to watch this year. A great team with Febvre to chase in practice, Monticelli has all the tools to do the job this year aligned with the raw speed he has always had.

Jeremy Van Horebeek: There is life in the old dog yet! Jeremy Van Horebeek was reportedly considering retirement at the end of last season especially with the fact he was becoming a dad but an offer from new motocross manufacturer Beta was too good to turn down and Van Horebeek is back – and the bike looks very competitive if pre-season is anything to go by! Van Horebeek says he loves the chassis and although he felt they were down a bit on power he felt it was something they could improve on for the MXGP series but regardless, the machine is so good already and Van Horebeek has been as competitive as ever in pre-season.

Having a new manufacturer is great for the sport and the fact their bike is already so good allows more riders the opportunity of a factory machine, especially with Suzuki’s demise. With Van Horebeek still fast and gelling with the bike already, it points to the chance of some excellent results in the manufacturers first season in an extremely competitive championship.