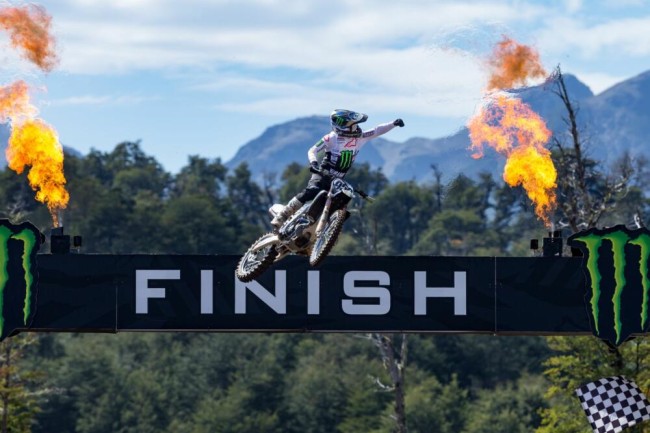 Monster Energy Yamaha Factory MXGP’s Maxime Renaux celebrated a magnificent race win at the MXGP of Patagonia-Argentina, round three of the FIM Motocross World Championship, and finished the Grand Prix on the second step of the podium, with the same points as the eventual winner. As a result, ‘The Rookie’ has moved up to second in the MXGP Championship Standings. Glenn Coldenhoff progressed over the weekend to finish fifth overall. At the same time, Jeremy Seewer finished third in the opening race but had his podium hopes spoiled by a spectacular crash in the final outing. He still rounded out the top-10.

Renaux put in a sensational ride during his first-ever visit to Patagonia as a 450cc rider. The 21-year-old Frenchman powered his YZ450FM to a top-three start and rode 20 incredible laps, nine of which he led after inheriting the lead on lap 12, to secure his first-ever premier class race win.

At the same time, Seewer followed Renaux around turn-one to make up the top-three but was shuffled back to fourth position by Tim Gajser. The Patagonia Race Track demands respect; its dark and grainy volcanic soil is always described as tricky to navigate because of the many hidden square-edged bumps and its hard-to-read surface. Many riders were caught out by the deceiving nature of the circuit, one of which was the early race leader Pauls Jonass. Seewer opted for a safe and steady approach and settled for a third-place finish in Race 1.

After starting outside of the top-10, Coldenhoff did his best to attack the tricky and deceptive circuit and eventually fought back to eighth.

In the second and final race of the day, Renaux put in another mind-blowing ride. The young Frenchman charged from sixth to second position in the first three laps of the race but had unfortunately lost too much valuable time to the current MXGP Championship Leader, Gajser, and had to settle for second position. Still, no mean feat for the rookie, tying on points for a Grand Prix win in just his third-ever MXGP attempt. As a result, the ‘959’ has moved up to second in the MXGP Championship Standings.

Seewer got off to another decent start, inside the top-five, but suffered an enormous crash over one of the biggest jumps on the track. The Swiss sensation put in an awe-inspiring ride through the field and managed to fight back to 13th position before crashing again. After another heavy knock, the ‘91’ remounted his YZ450FM but had to withdraw from the race as he was not feeling well.

Coldenhoff had to work hard after another mediocre start as he did in the opening race. After making some changes to his suspension settings, the Dutchman finally felt better on the track and was able to charge back to a sixth-place finish.

Going into the next round of the FIM Motocross World Championship that will take place in Agueda, Portugal, on the weekend of April 3rd, Renaux is second in the MXGP Championship Standings 17-points off the lead. Seewer is fourth, only 6-points shy of the top-three, while Coldenhoff has moved up to eighth.

Maxime Renaux
2nd MXGP of Patagonia-Argentina, 47-points
“I had a really good day; I am happy with it. It did start slowly yesterday, but step-by-step, we made some improvements on the track. I could win the first moto after a nice battle with Tim, which I had to fight to the end. The second race was a different story without a good start, but I could pass everyone except Tim, which was good. I couldn’t ask for more in my first season in MXGP; I just want to keep going like this, keep it on two wheels because that will be really important, and try to be inside the top-three every time.”

Glenn Coldenhoff
5th MXGP of Patagonia-Argentina, 28-points
“Yesterday, I took the holeshot in the qualifying heat and was feeling really good until about 20-minutes in, when I started struggling a bit. We made some changes and tried to solve the problem today, but in the first moto it didn’t work. I also completely missed the starts in both races today. But, I am happy to finish on a positive note because, in the second moto, I came from almost dead-last, back to sixth. I was happy with my riding. The team did a great job with the changes we made for the second moto, it was definitely working and I was starting to feel a bit more like myself, so I am happy with that.”

Jeremy Seewer
10th MXGP of Patagonia-Argentina, 20-points
“Today was bitter-sweet. I felt good on the track here, and it was cool to race in front of all the Argentinian fans. They were super supportive and to have the fans back after the last couple of years, you really feel it; the change in energy and atmosphere is really special. The first race today went pretty good; P. 3 is not too bad for the first moto, but then in the second moto I had big crash, and then crashed again, and I couldn’t continue. Obviously, it’s always disappointing to DNF, but we need to look at the positives, and try to recover and be back fighting for podiums at the next one.”