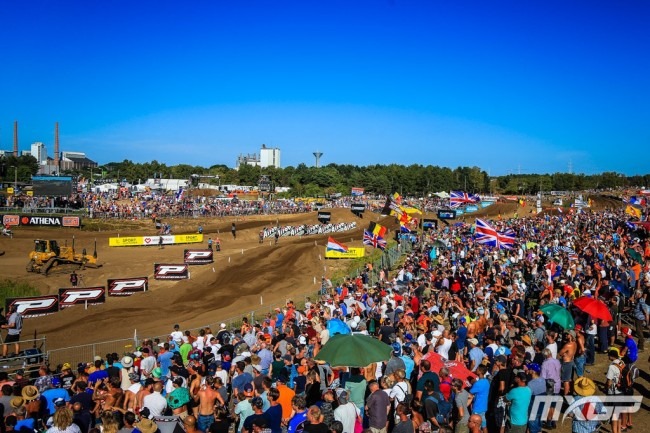 LOMMEL (Belgium) 31 July 2019 – The round 14 of the 2019 FIM Motocross World Championship will head to the MXGP of Belgium, set on the legendary sand circuit of Lommel this coming weekend. For many riders this is a home Grand Prix as most of the leading MXGP and MX2 competitors live in the surroundings of Lommel.

MXGP and MX2 will be joined by the EMX250 and EMX125 presented by FMF Racing classes. In theEMX250 it might beHonda Redmoto Assomotor’s Stephen Rubini who is leading the championship points, but it is F&H Racing Kawasaki of Roan van de Moosdijk who is starting to move closer to the Frenchman in the series points with some solid performances. Team Maddii Racing Husqvarna’s Alberto Forato sits between them in second position, but anything can and probably will happen in Lommel to change the championship picture.

Maddii Racing Husqvarna’s Mattia Guadagnini is the man in the EMX125 presented by FMF Racing and he just came off winning the Junior World Championship a few weeks ago. He will want to make sure the EMX250 red plate remains in his property after Lommel. Tom Guyon is a close second in the championship points and will be looking to close down the 13-point lead of Guadagnini this weekend, and INI KTM Junior Pro Team’s Mike Gwerder is third in the championship and will also be looking to remain a top three guy after the weekend.

Team HRC’s Tim Gajser might not have won the Grand Prix last weekend in Loket, Czech Republic, but he still goes into Lommel with a handy 177-point lead over second placed man Monster Energy Yamaha Factory MXGP team’s Jeremy Seewer and with just five rounds remaining in this year’s championship, the former MX2 and MXGP champion will be looking at adding a third title to his trophy cabinet and to make his first Belgian GP win in Lommel.

Last weekend it was Monster Energy Yamaha Factory MXGP team’s Romain Febvre, who took the GP victory, his first in three years, and the Frenchman can’t wait to get to the deep sand of Lommel to continue what has been a nice past month.

Like his fellow countryman Monster Energy Wilvo Yamaha Official MXGP’s Gautier Paulin is third in the championship, he knows how demanding the Lommel circuit is but being one of the best sand riders in the World he wishes to line up to keep his momentum. Monster Energy Wilvo Yamaha Official MXGP teammate Arnaud Tonus struggled with sickness last weekend in Loket, but he slowly recovered, you can be sure he will want to return to the podium, where he has spent many weekends in the past two months.

Shaun Simpson from RFX KTM team was back in Loket after a month stop due to a metacarpal injury has also won at Lommel in 2015 and like Paulin and Febvre, he might have already an eye on the Monster Energy FIM MXoN as possible selected rider.

Teammates Max Anstie and Glenn Coldenhoff, from Standing Construct KTM team are both sand specialists, and Anstie is a former winner at Lommel in the MX2 class for 2 years in a row. Both riders could show stunning performances in Lommel.

Monster Energy Kawasaki racing’s Tommy Searle made his debut in the team in Loket showing great speed even if he had some ups and downs during the weekend, surely he’ll feel more comfortable racing in Lommel.

Other riders to watch out this weekend are Rockstar Energy Husqvarna Factory Racing’s Pauls Jonass and Arminas Jasikonis, who both perform well in the sand, and a series points haul by the Latvian and Lithuanian is expected next weekend and Belgian Honda SR Motoblouz’ Jeremy Van Horebeek had a consistent weekend in Loket, reaching the 5thplace.

Red Bull KTM Factory Racing’s Jorge Prado has been unstoppable as he’s closing in on his second MX2 World championship. 12th victory of the season last weekend in the Czech Republic, and a 90-point lead over second placed Rockstar Energy Husqvarna Factory Racing team’s Thomas Kjer Olsen makes it logical that he goes into Lommel with big confidence and a great chance of extending his lead even more. Prado won in Lommel in 2017 and 2018

For Monster Energy Kemea Yamaha Official MX2’s Jago Geerts his home race will bring a lot of family, friends and pressure. How the Belgian rider responds to that pressure could be the difference from a podium, or disappointment.

Team HRC’s Calvin Vlaanderen looked good last weekend in Loket, and only an opening race crash stopped him from being a podium finisher. His speed is very good at the moment, and he doesn’t mind a little sand riding either, so expect him to be amongst the major points next weekend.

F&H Kawasaki Racing’s Henry Jacobi finished second last weekend and returned to good form as he’s been waiting for that podium for quite a while while Red Bull KTM Factory Racing’s Tom Vialle who was involved in that first race crash with Vlaanderen struggled in Loket and he will want to come back strong in the deep sand and remain in contention for a top five finish in the championship points.