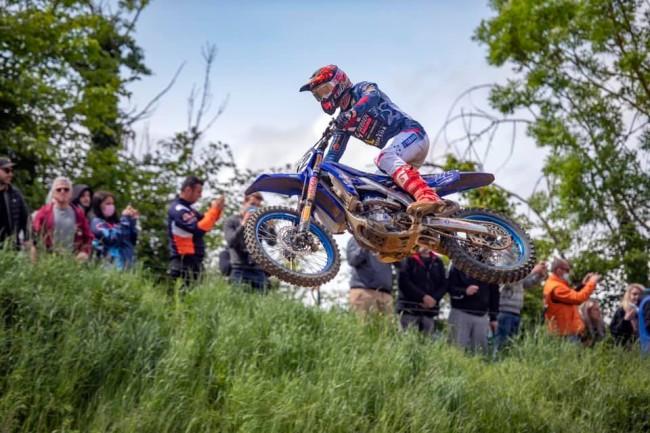 Germany was back on the MXGP calendar this year and it was great to see a big crowd at a GP venue once again. The Teutschenthal track was very rutty and choppy for the riders and presented a very technical track at round eleven of MXGP.

In the first race, Calvin Vlaanderen took a reasonable start but started where he finished in eleventh as he couldn’t pass any riders ahead of him due to the track being very one lined and difficult to pass but he had good speed.

After a few tough GP’s for Kevin Strijbos he was motivated to put them behind him and show his real speed. The first moto he started in fifteenth and he was able to stay there for a solid ride.

Unfortunately, Brent van Doninck had a disaster of start outside the top twenty and as he was trying to come through the pack collided with another rider which saw him at the back of the pack. He was able to come back to twenty-fourth which meant no championship points.

After a solid first moto, it all went wrong for Vlaanderen in moto two as he went down at the start and was unable to continue – a real shame as he could have had another top ten overall result.

Feeling good after moto one, Strijbos performed even better in the second race starting in fifteenth but this time he was able to progress and ended up a very solid twelfth. This is something to build on heading into the rest of the season.

Van Doninck took a better start in race two in eleventh after the first lap but couldn’t find a good feeling on the track and lost some spots to finish in fifteenth. They’re still some vital championship points which are important on your bad days.

Kevin Strijbos (13th overall): I am happy about this GP when you see the struggle that I had the last few GP’s. I didn’t ride since Riola because of the health issue and got sick on Monday so I can’t complain with 15-12 in the moto’s.  Both starts where pretty okay for me, and I could stay around the same spot all moto in both heats. The track was tricky with all the ruts but happy with the day. Thanks to all the people who helped to get me back going and on we go to France.

Calvin Vlaanderen (17th overall): It was an average day at the German GP for me. I struggled with setup in practice and didn’t feel good. In the first race I rode around in eleventh the whole race, did all I could to pass the riders in front, but it was like a train out there. In the second moto I went down at the start and couldn’t continue. Unfortunate but I’m healthy in one piece and will get my body ready for battle next weekend in France.

Brent van Doninck (18th overall): It was a terrible weekend. I am really disappointed about my day; I think it was the worst day of the whole year riding wise. The first moto I had a bad start and then on lap two I crashed again once again because of another rider. It meant I had to start from dead last again so I finished twenty-fourth. In the second moto I had a good start actually but just wasn’t feeling it. I couldn’t push and had no flow, I felt terrible out there. I finished fifteenth, I dropped some places in the race. Usually, I am moving up but this time I was going backwards. Hopefully we can have a better weekend in France next week.