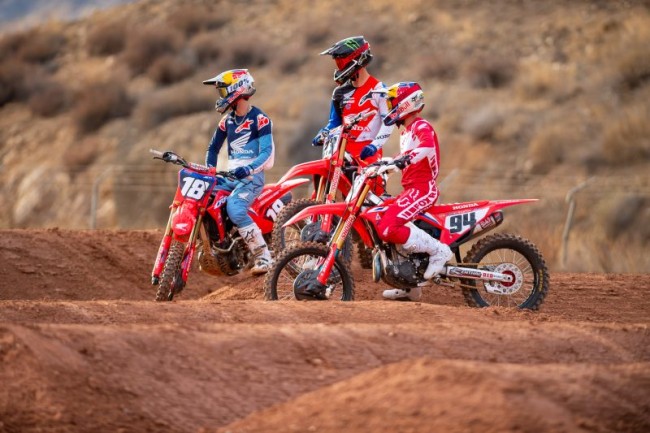 Ken Roczen says he tries to help guide his teenage teammate Jett Lawrence when he can – even if it is sometimes tough love! The German of course had similar path to Jett, in coming from Europe, adapting to America and learning supercross in the spotlight. Roczen however had even more hype around him to contend with than Jett as Ken was world champ when he came over full-time and was expected to perform. So if anyone knows what it’s like to be in Jett’s shoes, it’s Roczen.

“I try to help out where I can,” said the 450 supercross points leader when we asked him about the relationship with his young teammate in the press conference. “You never want to see your teammate go down a couple of times like that. I told him after the heat race, when he went down and was obviously in pain, but I told him, ‘man the F up, you can still turn this night around, we have all been there, we have all had rough nights.’ He can go out there and really turn it around, even in pain, we have seen it happen multiple times. But at the same time, it has to be in a safe manner. He went out for the LCQ and made it through, he ended up deciding not to race, I know his collarbone or shoulder was hurting. I just try support him in a way that you can still turn this whole thing around even though you are down right now.

“I just want to keep his spirits up,” continued Roczen. “It seemed like he was pretty down and disappointed and obviously in pain but I try to help where I can and, sometimes, you need a little bit of a kick in the ass and that’s what I try and be there for him. He’s young and he needs to settle down every now and then, when you are second in qualifying you don’t need to go out there and absolutely send it into the whoops and things like that happen. It’s just unnecessary but at the same time, I’ve been there. I’ve ridden hard when you first come into this thing and you always want more but at the end he decided not to race and I am proud of him for that. It takes some balls to pull it out of there and I think it’s good for him. He has a long racing career and a lot of racing ahead so I think it’s better for him to recover for Saturday and try again, be little bit calmer, more focused and less crashing.”

With a rider of Roczen’s ability, experience and intelligence in his corner as well as Johnny O’Mara, Lawrence certainly has the right people around him to get through the lows and achieve his goals of getting to the top of the sport.