Lawrence, Roczen and Sexton on Houston 1 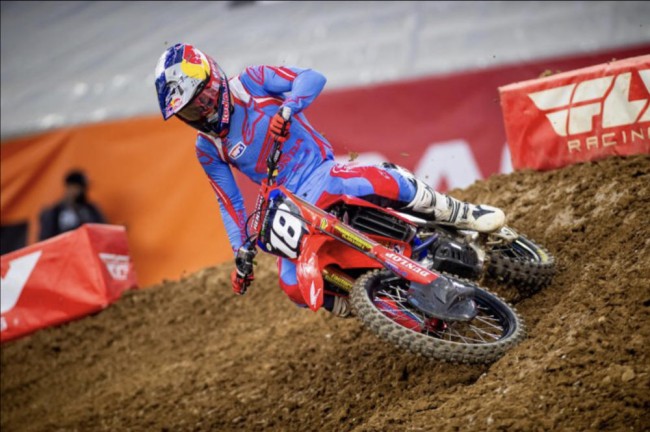 The highly anticipated 2021 AMA Supercross season kicked off on Saturday at Houston’s NRG Stadium, where Team Honda HRC’s Ken Roczen rode his factory CRF450R to a runner-up result, while mistakes and bad luck limited teammate Chase Sexton to 14th in his 450SX debut. In the 250SX East race, Jett Lawrence showed good speed on his CRF250R before finishing in sixth.

Shortly after the gate dropped for the 450SX main event, Roczen worked his way through the top five to reach second place, with over 17 minutes left on the clock. The German stayed close to the leading Justin Barcia before applying pressure with about five minutes remaining, making three strong pass attempts. Ultimately he opted not to force the issue and settled for second. Sexton showed his speed earlier in the day by qualifying first in practice, but it was a tough main event for the rookie, who suffered a poor start and then fell when coming through the pack. In the end, his 14th-place finish didn’t accurately reflect his ability.

Lawrence showed great speed throughout the day in the 250SX class, posting the best 250SX East qualifying time and placing third in his heat race, but unfortunate mistakes in the main event held him to sixth at the finish.

Ken Roczen: It was a really good night for me and the HRC team. We got second in the heat race and in the main event after a hard fight with Justin Barcia. He rode really well, but I never let loose and was right there until the very end. I think there was a lot of madness going on behind us. The track was brutal; a lot of it was really basic, but half was pretty technical, and it got super rutted and bumpy. We had a really good night. We hung in there and got away with a second place, which is good for the first race. We’re in the hunt this season and it’s super long. Right now we’re just going to focus on recovery and getting back here on Tuesday for round 2.”

Chase Sexton: Things started off okay; I qualified fastest in practice, which was good for me. Then I went to the heat race and got a pretty bad start. I came from ninth to fourth and caught the lead group but just ran out of time. The main event was pretty much a disaster. I started off ninth or 10th and ended up getting together with Martin Davalos. From there it just kind of went downhill and I made a few more mistakes. It was just kind of a rough main event overall, but I’m looking forward to going racing again Tuesday. That’s one of the positives about being here in Houston. We have three races in a week, so hopefully I can redeem myself and get on the box.”

Jett Lawrence: “The first race day wasn’t too bad. There were a few mistakes that I wasn’t happy about, but I walked away without too much damage to my body. Practice ended up going really well; in the first qualifier I put a really good lap time down for P1, and then the second one I put another consistent one down, getting second behind [Christian] Craig. In the heat race I had a few small mistakes. I was excited for the first race and a little too energetic, but I ended up getting third. In the main event I was kind of playing it too safe and backed off too early and gave away what should’ve been a holeshot. I spent too much time behind another rider in the first half and had some other people pass me. I ended up finding a pretty good flow at the end and was fourth after RJ [Hampshire] went down. I tried to make another pass with a lot of charging, but that didn’t go as planned, as too much front brake and a wrong line in the turn ended up flicking me. I got up fairly quick, but then someone came and hit me again, knocking me back down. I ended up getting sixth, which isn’t terrible, but not what I wanted but I’m still fairly happy with it.”

Erik Kehoe: “Overall, the team had a good start to the series. While Jett qualified second and showed good speed all day, unfortunately mistakes in the main event earned him sixth. Chase showed his speed potential as well, qualifying first in practice. Unfortunately, a bad start and a collision with a downed rider left him 14th in the main event. Ken showed consistent speed all day and put together a solid main event to finish a strong second. The team will regroup and prepare for round two on Tuesday.”