Jett Lawrence – not happy with Mosiman! 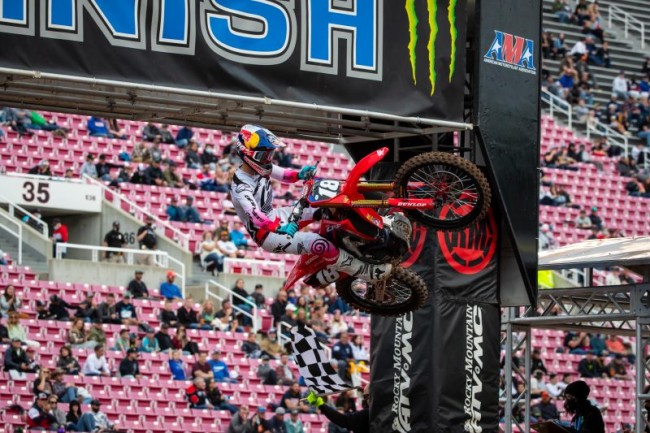 An angry Jett Lawrence was surprisingly not happy with Michael Mosiman’s attempted pass in the main event – but he was happy for his friend Jo Shimoda at getting his first supercross win, even if it cost him vital championship points.

See what the outspoken Aussie said to the media here:

Jett, you also had a difficult start to that main event. Just take us through your night and what progressed and how you developed through the track. I kind of already screwed myself a little bit on the start because my bike was already pretty hot because I was obviously in second gear and I had to rev a lot and I didn’t want to rev the bike when it was cold. So I just warmed up a bit too much and ended up overheating a little bit which didn’t make it explode out of the gate as much. So I felt like I was a bit off balance, but it wasn’t too bad. Didn’t give myself much hope with a win there, but I was able to kind of keep my head down and keep pushing through. Mosiman and Jo kept on monkeying around and that stuff, so I was able to kind of catch up to them a bit and at least get second. I tried having a go at Jo but I just made those few little mistakes and it was costly. But congrats to Jo. It was not a bad night from how my start was.

We caught a glimpse of you having a chat with Jo there at the end of the main. What were your emotions for him? You having got your first win, what did you have to say to him?
Yeah, I was really pumped for him. As a friend I’m pumped for him to get his first win. Like you said, I know how that feels. So it was cool to see that and see my mate being able to get one, which is really cool. Then again, on the competitive side I was a bit bummed. But I’d rather him win than probably anyone else. He’s a good kid. I was pumped for him. I was able to talk to him about it. We were talking about the first few laps and he was like, “Dude, I was so nervous,” and all that. So I’m pumped for Jo. It doesn’t help me in points, but I was pumped. Really good kid. I couldn’t be more pumped for him.

Walk us through the pass on [Michael] Mosiman and the hand gesture.
Now you understand what type of rider he is. I passed him clean and then the next turn he came right like he was going to T-bone me. Luckily I committed so over the finish line I showed him that he was number one, and left it at that. Now you guys understand why I took him out at H2. If you don’t bump him and make sure you get a gap on him, he goes for your front wheel. He’s just that type of dumb rider. As you seen, I passed him clean. Didn’t do anything dirty, and then he goes straight for the almost T-bone. He could have ended my night or even worse both our nights. I could have been injured. Just shows how brainless he is. I just had to make sure I showed him he’s the number one rider of that list.

See the pass attempt that irked Lawrence below: