Jason Meara interview – back on form! 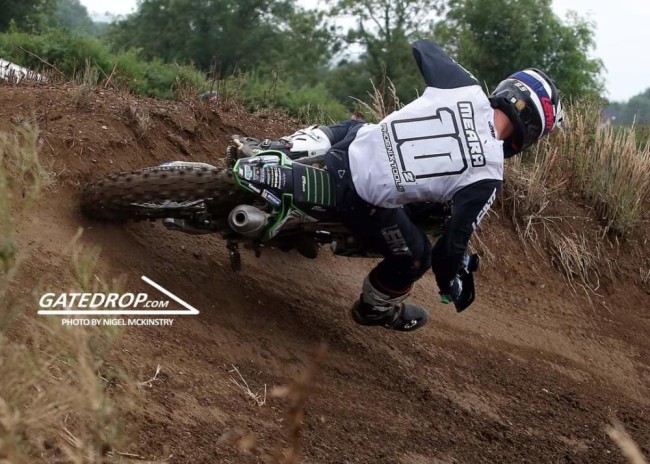 It has been a tough season for Jason Meara on the Phoenix Tools Apico Kawasaki, with injuries not allowing the young Irish rider to really show his potential on the British stage. But that all changed at the last MX National round at Canada Heights that saw Meara get the starts and finish sixth overall in a big boost to his confidence.

Underpinning his return to form has been a dominant performance in the Ulster Championship, that has seen him win 8 out of 9 motos with the latest wins coming at Tandragee on Saturday even if a puncture while leading final moto ended Meara’s chances of winning every moto this season – yet he still got second!

We caught up with Meara after that last frustrating moto to get his thoughts on the day and his return to form in GB.

Good day today, two wins and a second but you were a puncture away from nine races unbeaten!

Good day all in all, can’t really complain, the riding has been good. Really, really happy with my riding today, it’s not my sort of going that but I think I proved I was the fastest all day. A couple of good starts as well which is nice because that is always my downfall! Perfect season ruined but I am not really too worried about that anyway, it’s all just training for going across the water.

The second one you made a mistake while leading and it was an exciting last couple of laps with Bird, you were shoulder to shoulder going into one of the turns there for the lead!

Yeah I got a holeshot must be the first time in five years – I never get holeshots! I just lost the front on the first lap and went down, was stuck under the bike so it took me a bit of time to get going but got up and got going again and managed to close him in, it was a pretty big gap. Closed him in, took the lead heading unto the last lap, timed it perfect.

Moving on to the British Championships, you had a very good ride at the MX National, I’m sure you were relieved it’s been a tough season for you at that level.

Definitely, It’s been a tough season – big time. Obviously I injured my shoulder at the first round and tried riding through it. My riding has looked terrible but I just wanted to keep pushing through it and put points on the board because I knew as time went on I maybe had a decent result in the MX Nationals. I pushed on through it and the shoulder is feeling good again. Finally went into Canada Heights fighting strong, couple of good starts and the riding was strong all day. They were consistent rides, I definitely think we can push on a bit more closer to the front. So sixth overall at Canada Heights and if things had went our way I wouldn’t have been a kick in the arse away from the podium but all in all I can’t complain, fourth in the championship now in the MX Nationals, so just keep the ball rolling.

It’s bound to be good for your confidence to see where your level really is now you are fit again?

Yeah, big time. After Hawkstone there was a bit of a break and the shoulder got better a couple of weeks after Hawkstone. So I have been riding local races at home, I knew myself I was back on my old level and I was looking forward to getting away and showing everyone what I could do.

And expectations for the last run of British championships and MX Nationals, what are you looking for?

Definitely inside the top ten, but I want to be pushing closer towards the top five. At the MX Nationals last weekend the only riders missing were SImpson and Sterry and I showed myself at times I had the speed to run with the top three. It’s just putting all the pieces together, get a start and see where we end up.