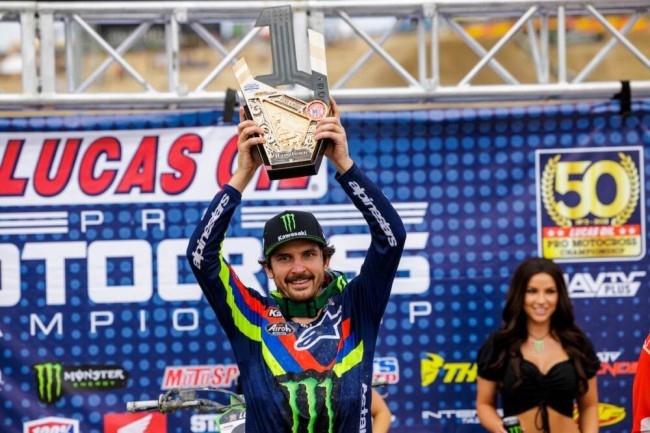 Recognized as the longest-running national race in American Motocross history, the Hangtown Motocross Classic boasts an exceptionally challenging track with drastic changes in elevation, off-camber sections and notoriously hard-pack soil. In 450 Class timed qualifying, Anderson proved he had the strength and speed to overcome the physically demanding track by recording a lap time of 2:06.296 to earn fastest qualifier and first gate pick for the motos. Savatgy utilized the first half of the morning qualifying session to study his competitor’s lines before clocking in a lap time of 2:08.050 to qualify in sixth.

In the first 450 Class moto, Anderson launched out the gate aboard his KX™450SR just barely being edged out of the holeshot credit with Savatgy following behind in sixth. Anderson quickly began chasing down the lead rider before a small mistake led the No.21 off the race course momentarily, putting a halt to his early race attack, yet maintaining second position. Staying patient, Anderson quietly cut down the leader’s advantage and studied his opponent’s lines before mounting a second charge. Combining raw speed with superior bike handling skills, Anderson was able to utilize the deteriorating track conditions to experiment with different lines and secure a late-race pass for the lead. The New Mexico native crossed the finish line to claim his first moto win of the 2022 Pro Motocross season while Savatgy finished in 11th after jockeying for a top-10 result the entire race.

The second 450 Class moto saw Anderson start inside the top-10 with Savatgy running in 11th. Anderson showed no hesitation carving his way through the competition ahead and into fourth before the halfway point. With the race nearing its end, Anderson gained control of third by railing around the outside of a rutted corner. Savatgy showed impressive race pace and endurance during Moto 2 as the No.17 was able to use similar lines as his teammate to move inside the top-10. When the checkered flag flew, Anderson crossed the line in third to claim his first AMA Pro Motocross overall victory with 1-3 moto results while Savatgy earned an impressive ninth overall with his 11-9 moto finishes.

Jason Anderson: “Man, I’ve been working so hard for so long to get an overall win in the Pro Motocross Championship that this doesn’t even feel real yet. I think today was the best I’ve ever felt racing a motocross national and I want to thank everyone on the team at Monster Energy Kawasaki for all the hard work they put in to get me here. This wouldn’t be possible without them. I have to admit, it feels really good to get the first one out of the way early. Now it’s time to keep digging and grinding for more”.

Joey Savatgy: “I’m very pleased with the ninth-place result this weekend. My goal for the race was to get comfortable being in real race scenarios again and leave Hangtown healthy. All things considered, I achieved those goals and the team was pleased with my performance so today was an overall success for us. I know I’m only going to get faster and more comfortable on the bike as the season goes on, so there’s no need to try and rush things early.”