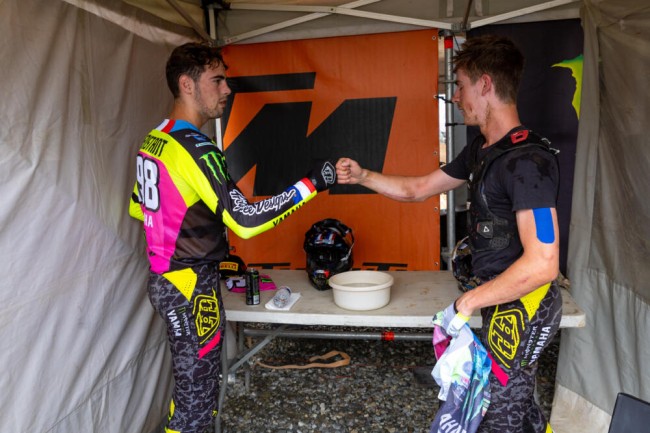 The Monster Energy Yamaha Factory MX2 riders had to deal with some setbacks in GP9 in Ernée. But both Geerts and Benistant showed a lot of resilience and sent their YZ250FM to the podium. Jago was second overall, Thibault – who won race 2 – third.

A torrential rain on Saturday afternoon turned the Circuit Raymond Demy into a huge mud puddle, with all its consequences. Benistant managed to stay out of trouble and finished third in the qualifying race. Unfortunately, Geerts was dragged into a fall by another rider in the first turn. He fell hard on another bike, immediately grabbed his left shoulder and went directly to the medical centre. How relieved Geerts was when he heard that nothing was broken. The Belgian spent the rest of the evening mainly with Yamaha’s physiotherapist.

Catch-up race
“The physiotherapist did an excellent job. I still have a bit of pain, but I can certainly ride”, said Geerts, just before the start of the first race. The Belgian – who had to start completely on the outside – powered his YZ250FM to 7th place in the first turn. Half way through the first lap he was already in fourth position.

And Benistant? He couldn’t get his bike to start. Only after 15 seconds he finally managed to start.
In front, Geerts killed two birds with one stone by passing both Horgmo and Längenfelder in the same turn. The Belgian got himself quickly under the rear wheel of Vialle, but tipped over and had to start all over again. In the penultimate lap, Jago got himself in contention again, but was a second short on Vialle.
Meanwhile, Benistant had started an impressive catch-up race. After barely five laps he had already moved up from place 26 to 10. In the final stage he passed Adamo and Gifting for P8.

Two horse race
After his failed start in the first race, Benistant was eager to get off to a superb start in race 2. And he did. The former European champion was right behind Vialle in the first turn and quickly took the lead after a nice move on the wave section. Geerts didn’t get the best start, but recovered well in the first few corners to move up into third position. He was on a roll and stormed past Vialle to take second place. The Monster Energy Yamaha Factory duo pulled clear from the championship leader and made it a two horse race. Jago was getting ready to pounce, but Benistant didn’t want to relinquish the lead in front of his home crowd. Thibault grabbed the race win and a third place overall. Jago, second overall, is trailing Vialle by 11 points in the World Championship classification.

“I’m quite happy with my second place today. To be honest: I didn’t expect this result after the setback on Saturday. How far did I get in the qualifying race? Hundred meters. My start was pretty good, but suddenly a few riders went down and took me out too. I fell with my shoulder on a bike. Very painful. At first I feared a broken collarbone or shoulder. Fortunately, it turned out that nothing was broken or cracked. A relief. The physiotherapist of Yamaha did a great job on Saturday evening. He made sure I could start on Sunday. My start position was too far outside, but still I managed to take two good starts. I had a really good speed and was able to fight for the win in both races.”

“A race win and on the box in front of my home crowd, that’s great. It was a massive crowd. It’s really crazy when I went down the hill and saw all of them in front of me. They were all screaming and cheering me on. Definitely, an extra motivation. They helped me to come back in the first race. My bike wouldn’t start. I left the gate fifteen seconds later than the rest. It was mentally tough, but I worked hard to get to eighth place. I had a good start in the second race and went by Vialle on the first wave section. Then I knew: this race is mine. Although Jago kept pushing until the end. But I stayed calm and smart. My next goal is to win a GP as quick as possible.”