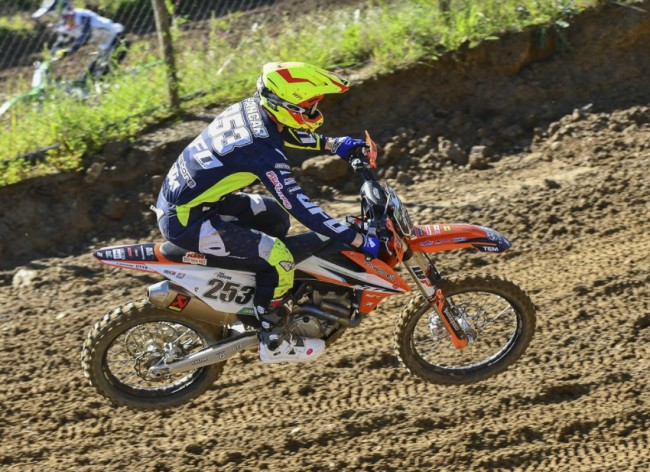 We have reached the halfway point of the Italian Prestige Championship which took place on the Montevarchi track in Tuscany, home race for Paolo Mencacci’s KTM Racestore Team the complete line-up with Jan Pancar and Jacopo Fabbri. The young Slovenian Pancar arrives at this race after two excellent performances in Maggiora and Mantua.

In qualifying Jan manages to find an excellent feeling with Montevarchi’s hard ground and goes to score the second best performance in his group. Jacopo Fabbri suffered from excessive pressure as his home race was unable to find the right lap in qualifying, qualifying in Group B.

In race 1 Pancar was able to sprint very well from the starting gate and immediately moved to the top of the standings, Jan climbed up to second place, a position that he managed to hold for most of the race. Unfortunately for Pancar due to an anomalous hardening of his arms he had to pick up the pace but still took home an excellent 4th place.

In the second heat Jan showed he could compete with the best, the start of the race was not easy and on the first lap he moved into eighth position. Pancar found in his path an opponent who hindered him making him waste time. However, Jan Pancar recovered up to fifth place in the final.

Jacopo Fabbri in Group B with two excellent heats but with some errors he still finished in sixth place in the Fast category.

Next appointment on 5-6 June in Cavallara.

Paolo Mencacci: “We are very happy with Jan, he amazes us race after race and the great work we are doing all together is leading us to excellent results, in qualifying he was very good with the second time. Too bad in race 1 that he suffered from a hardening problem in his arms which did not allow him a great result. Fabbri suffered the pressure and the lack of experience in such a high level race but in Group B he showed good things.”