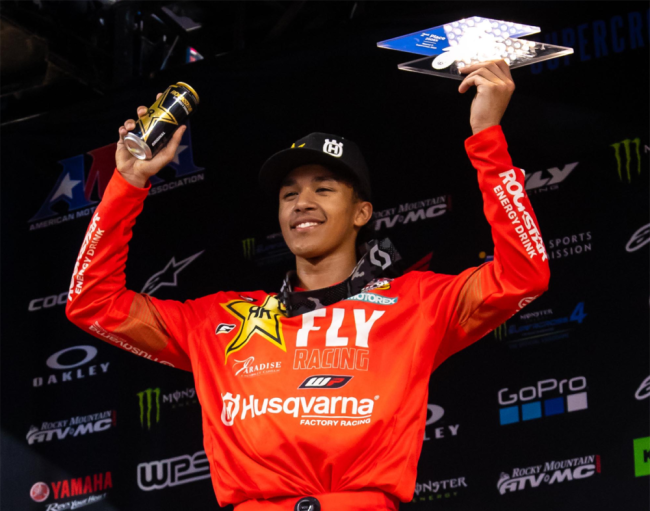 Round 11 of the 2021 AMA Supercross World Championship took place in Arlington, Texas on Tuesday serving as the second of three races to take place inside AT&T Stadium this week. It was a memorable day for the Rockstar Energy Husqvarna Factory Racing Team, who witnessed a break-through performance by Jalek Swoll as he earned his first-career podium with a strong second-place finish in the 250SX West Main Event.

250SX West
It was a superior day all around for Swoll, who placed a season-best sixth in qualifying before setting out to a strong start in 250SX Heat 1. With a top-three start, Swoll ran up front throughout the entire race to ultimately capture third, his best heat race finish of the season. In the Main Event, Swoll kept the momentum rolling with another great start, sitting second right away on the opening lap. He diced back-and-forth inside the top-three in the first few laps but he eventually set claim to the number two spot. Maintaining his composure through the pressure up front, Swoll went on to secure his first career podium with an impressive second-place finish.

“I’m so happy right now, I can’t even put the words together,” Swoll said. “It was such a long road but I kept my head down and I knew I was going to get here. First podium – I’m pumped and just happy to reward the people who have stuck behind me. I definitely want to carry the momentum into Saturday.”

It was an unfortunate ending to the day for Daytona SX runner-up Stilez Robertson, who made it through qualifying and his heat race before ending his night early due to a foot injury. In 250SX Heat 1, Robertson grabbed a sixth-place start and he raced in that position until two laps to go, when he overtook fifth. Although he secured a fifth-place transfer position, Robertson was unable to line up for the Main Event due to a foot injury sustained earlier in the day.