Anderson and Wilson on Arlington 2 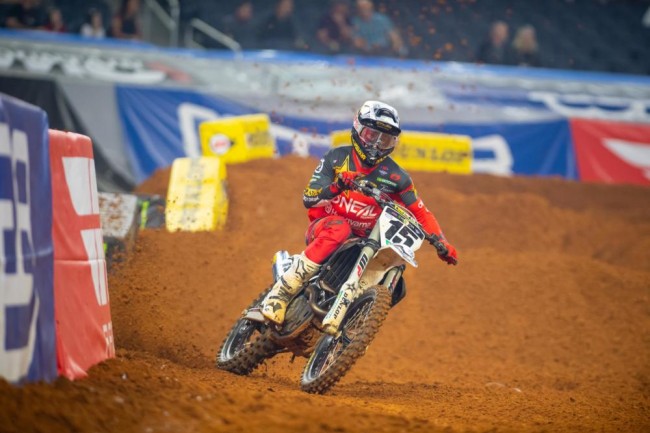 450SX
Coming off a season-best podium finish just a few days ago, Anderson returned to Arlington on Tuesday with high hopes of a repeat performance. Qualifying fifth, Anderson was on-track heading into 450SX Heat 2, but he got pinched off the start and began the opening lap in 15th. He was able to quickly charge through the field, scooping up 10 spots to secure an eighth-place transfer into the Main Event. In the main, Anderson once again found himself at the back of the pack after getting tangled up and going down in the first turn. As he was working his way forward, Anderson got stopped up behind a few downed riders and lost a lot of momentum but he did his best to continue climbing. With an impressive charge, Anderson worked his way up to just outside the top-five battle, ultimately finishing seventh.

“My riding was actually really good once I figured out some issues we were having,” Anderson said. “I had a little mishap in the heat race and ended up eighth. In Main Event, I had a not-so-good of a gate pick and had a first corner fall, starting in dead last, but I was able to get back up to sixth. I’m looking forward to the next round, I think we can do some damage.”

Wilson got a seventh-place start in 450SX Heat 1 and he put himself into a favorable sixth-place position early on. With consistent laps, Wilson held onto sixth for a majority of the race until encountering a race-ending issue with the rear wheel on the final lap. In the LCQ, Wilson secured a fifth-place start and he charged his way up to second late in the race, ultimately passing for the lead and securing the win. In the Main Event, Wilson started in ninth and he battled around the top-10 for most of the race. He locked in 10th heading into the final laps, where he finished 10th on the night.

“It’s not an amazing ride for me but I’ll definitely build from it,” Wilson said. “I need to keep being in the top-10 and then to the top-five and eventually on that podium. It’s been a tough season so far with injuries but I’m working through it and trying my best. Thank you to the team, my bike was awesome!”