Is weather the only thing that can stop Roczen’s momentum in Orlando? 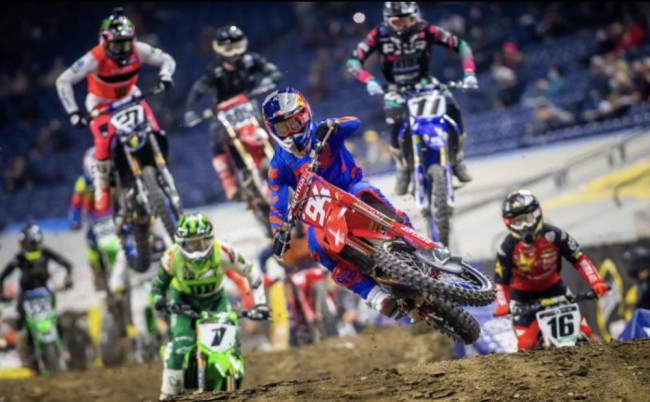 Roczen has made mention of a new mentality this year, enjoying the process and taking his day lap by lap and each race as it comes without getting caught up in the big picture – all while enjoying being a new dad. The formula is working a treat but with rain forecast for Saturday and a 60% chance of precipitation after 7pm – will the weather be the one thing to disrupt Roczen’s flow?

The factory Honda rider has shown a calm head under stress already this season to come from nearly last to fifth, and subsequently overcame the docked points fiasco. He then rebounded from losing a win to Cooper Webb after Dean Wilson got in the way, to win three races in row and he has won in different way each time! Roczen held off Tomac, even passing the Kawasaki man back after jumping off the track at Indy 1, to totally dominate at Indy 2 before holding off Cooper Webb at Indy 3 on a track Roczen admitted he wasn’t as comfortable on.

So far he is ticking every box and overcoming every challenge put in his way and has come out on top. The weather could lead to a more random race if it’s a mudder and his rivals, rain or shine, will have to starting taking advantage of any opportunity they get before the German builds up an insurmountable points lead.

As the championship distills down the top three of last season, Cooper Webb, despite riding great all day last Saturday, couldn’t get the win and let another three points get added to Roczen’s championship lead. But if anyone knows how important momentum is, it’s Webb, seemingly able to increase his speed on willpower alone, the Red Bull KTM will be all out to finish ahead of Roczen in Florida to stop the bleeding in the championship.

After getting caught in the Justin Barcia crash last weekend, Eli Tomac is almost a race a behind 24, points down and is under even more pressure to beat Roczen and turn his championship defense around.

Justin Barcia had his hopes wrecked thanks to Friese and is 42 points back but an angry Barcia intent on getting another win isn’t someone Roczen wants to be around – they already hit last weekend and Roczen ended up with a bent shift lever!

While Roczen appears to have things under control, his competition have to start making him uncomfortable and riding for points early in the season is now a thing of the past. They have to start winning and hope, that if they can’t, maybe the weather can help their quest in stopping Roczen’s current domination of the series!