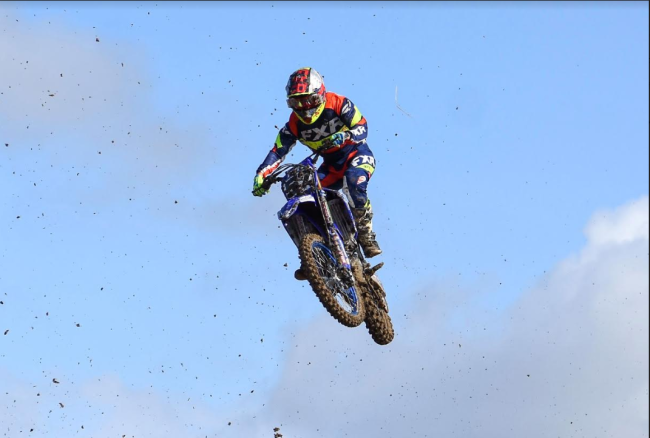 One of the more experienced riders in the British paddock is Tony Craig but he’s finally got the opportunity to ride for a team in the British Championship.

After Taylor Hammal picked up an injury and was ruled out for the rest of the season, the Rob Hooper Yamaha team were on the look out for a replacement rider.

They decided to give Craig an opportunity and he made his debut with the team at Foxhill during the weekend.

We caught up with Craig to discuss his big opportunity and much more.

Gatedrop: Tony, last week you got the call from Rob Hooper to ride for his team. Was that a surprise and how did it feel to get the opportunity?

Tony Craig: Well, I’ve been in contact with Rob before about a possible fill in and I said if he was ever in need of a rider I’d easily help him out. So I had heard Taylor was out from his mechanic Will Hill, so I was more excited to hear from Rob than surprised. Getting the chance to be in with a professional team is amazing and something I’ve always wanted a chance at.

Gatedrop: You made your debut with the team at Foxhill, how did the day go for you?

Tony Craig: It was a good day really, results were average but I can’t complain. Qualified okay, race 1 I made too many mistakes early on which I couldn’t make up for when the race was red flagged. I was happy with my riding in moto 2 though. I enjoyed my days racing and went home healthy so it was one of my good days.

Gatedrop: How’s the Yamaha compare to the Husqavarna/KTM, did it take you long to get comfortable?

Tony Craig: Man, I love the Yamaha! I’ve never raced a Yamaha before and I was really surprised with how good the bike was after just the first day trying it. I gelled with the bike straight away and made a few small adjustments to suit me a bit better. I’m told the 2020 450cc is even better so I plan on getting a Yamaha to race next year.

Gatedrop: What’s it been like working with Rob Hooper? What kind of tips has he been giving you?

Tony Craig: Well Rob is a legend and someone I have huge respect for. He was a big name and team in the 90’s when I was young watching the racing. Straight away he was in giving me some small tips, mostly trying to make sure I was relaxed and not to go away and do anything silly in the races. For years now I’ve been needing someone like Rob that’s seen it all and has huge experience with top level racing be at the side of the track watching me and seeing the small things I need to improve on. After some tips of the things I done wrong in moto 1, I made sure I listened and changed things up for moto 2 and then I put a strong race in.

Gatedrop: You’ve been a privateer for a number of years. Just how difficult is it racing the British Championship as a privateer? Especially coming from Scotland!

Tony Craig:  (laughs) Coming from Scotland is the most difficult thing. I think the closest race I’m doing from my 2 main championships is Fatcats which is like a 350 miles for me. I do a lot of driving but you get used to it. It’s never really bothered me that much, as long as I have money to cover the fuel I’ll drive anywhere.

Going racing as a privateer certainly isn’t easy, going racing for anyone these days is getting tougher with the rising costs. Between me and my partner Sandra we spend everything we have to go racing on the weekends and we wouldn’t change it for anything, We just love going racing with our family. I stress a lot about money when I shouldn’t and I run all the parts on my bike as long as possible but I make sure my bike is good enough to go racing. I’m lucky I have some good sponsors that help me out and make sure I have the parts I need at times to go racing, as with any privateer I’m due out money everywhere but myself and sponsors do what we can to go racing.

Gatedrop: Even though this is a great opportunity, does part of you wish you got this opportunity during your younger days?

Tony Craig: I really wish I had been picked up in my teens and had some guidance from someone like Rob Hooper. I made a lot of silly decisions then that kept me from away from racing. When I came back racing I’ve made so many silly mistakes. I really have learned the hard way but it is what it is I’m still here and loving it.

Tony Craig: Mainly to enjoy going racing and try to get into the top 10.

Tony Craig: Yeah, racing in Scotland hasn’t been great for good few years now. I haven’t committed to a full Scottish championship since 2013. Stuart Flockhart and his wife Louise have started a new championship and trying to revive the racing in Scotland, they have some good sponsors and put up some big prize money but they’re still struggling to get some top riders there. It will take a year or 2 but least they’re trying. I raced my first Scottish in nearly 3 years about a month ago and it was a good enough days racing. I won’t be committing to racing in Scotland any time soon though, the money is good and I could actually make some money but I’m not bothered by money so I’ll keep chasing all the best racing in the country with the MX Nationals and Maxxis British Championship.

Gatedrop: You currently sit 19th in the British Championship, are you happy with your season or did you have higher expectations coming into the season?

Tony Craig: The season has definitely not gone the way I wanted it too. I’ve had lots of bother off the track with a few things then I raced for few months with a broken collar bone that I kept hurting again. Nothing unusual there though so I’ll just keep on pushing to try and improve my results to finish the year strong where I would have liked to have finished all year long.

Gatedrop: Anything else you’d like to add – anyone to thank?

Tony Craig:  I’d like to thank Rob Hooper for giving me the chance to end the season with the team. Also, thanks to all my sponsors that helped me this year keeping me on the track, the help means a lot as these guys step up when I have nothing and are okay with me taking the opportunity with rob. Thanks to Caroline and Scott for being at each race supporting me and the family. Biggest thanks goes to my partner Sandra I really would be nowhere without her, Sandra and my boys are my biggest motivation to go racing. Also, thanks to Gatedrop for taking the time for the interview.