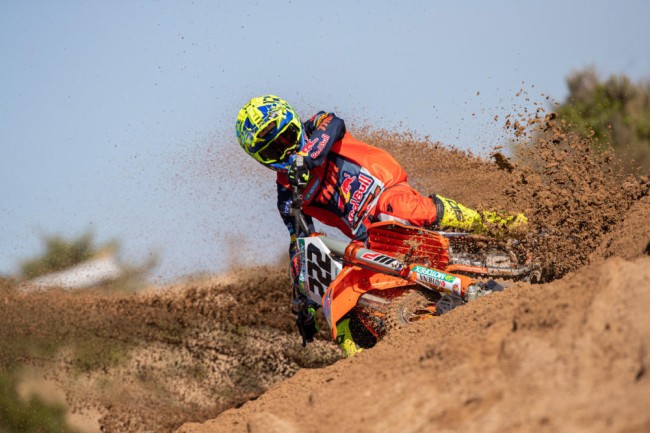 One of the greatest riders of the modern era of the FIM Motocross World Championship enters his twelfth season with the Red Bull KTM Factory Racing team in 2021. From thirteen years in the MXGP class, Tony Cairoli has only dropped out of the top three in a final championship standing on two occasions; 2015 (7th) and 2019 (10th), both primarily caused by injury. In ’21, armed again with the KTM 450 SX-F he will be chasing his tenth FIM title and will hopefully extend his total of 92 Grand Prix wins; the second highest amount in the history of the sport.

Tony, you had minor knee surgery at the end of 2020 and started riding at the end of February. How is your fitness?The knee is OK, and I started training with the bike by taking it very easy. I was giving priority to physical work in the first part of the recovery – not so much on the bike – and also because there was some instability about the start date for the season. So, there was no need to rush. But, I’m OK, I’m feeling good.

So, the big question for 2021: when will you decide if this is the last year of racing for you?It’s a matter of results, of course, and how competitive I am: this is clearly my goal at the moment. I want to see if I can still improve but I know the level of performance is unlikely to go up. A lot depends on my condition and the knee. That’s why I don’t know where I am [with speed and feeling] because I still cannot really push because of this injury following me around. Last year was very difficult for me but I think if my knee can be in a bit better shape for 2021 then I should be able to fight for the championship. This is my goal and then the next season depends on how I feel.

You were a mentor to Jorge Prado when he came to the team and now Mattia Guadagnini is the junior rider. How has it been working with him and knowing Italy now have a big prospect?Of course Mattia has quite a bit of pressure at the moment. He has come from the European Championship directly into MX2 and with the potential to be a top-three guy, he has a lot of expectation. It won’t be easy for him. I have been in his shoes before, but it has been going well for him and he has been working a lot. I think the first races will tricky but once he gets the flow I think the results will come.

You haven’t had much riding time yet but is there anything you wanted to fix or address on your KTM 450 SX-F for this season?No, so far we have tested a few things but because I don’t have a lot of bike time we are not pushing 100% with technical parts. For me it is important to feel better with the knee and then test something when I am at a decent level.

What about rivals for 2021? I think we’ll see the same sort of names going for the championship as we did in the last couple of years but for race wins I think there is a bigger group and even new people like [Thomas Kjer] Olsen and [Ben] Watson are among them. I think it is time for Jorge [Prado] to show his skills in going for the title and then you have Tim [Gajser], Jeffrey [Herlings] and myself. [Jeremy] Seewer will be very competitive, [Glenn] Coldenhoff also. There are many guys that can go for the championship and even more for the single race win.

Your skill at building a championship is unmatched for the last 15 years at least but do you feel like you still have the raw speed for multiple race victories?I think it depends on the knee again. Last year I started the season and I wasn’t ready with my shoulder and when that was better the knee got worse! So, in 2020 I could not really ride like my best. If I’m in good shape I know I can still go for wins, even if the championship is my main goal and what I’m working towards.