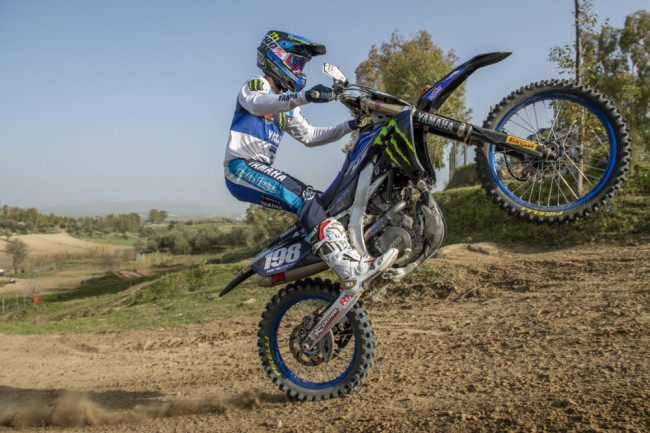 One of the most exciting riders coming into the MX2 world championship this season is EMX2 champ, Thibault Benistant, another fast Frenchman who could really put the cat amongst the pigeons in 2021! The youngster spoke about his hopes and goals for his rookie world championship season.

How relieved are you that the world championship finally starts after a long Covid-19 break? “We had to wait long, really long. The first months of the year were difficult as we didn’t know when en where the championship would start. It was difficult to make a decent training program. When do you need to be top fit? When do I have to push harder? Not easy, but it was the same for everybody. Anyway, I’m happy that’s the championship will finally kick off this weekend.”

At the end of 2020 you rode already a few rounds in MX2. What did you learn from those races? “That everybody is fast in MX2. My speed was not so bad in EMX250, but MX2 is another level. You really need to have a good start to be able to fight in the front. I rode three grand prix last year. It went quite well, with two race podiums. I’m looking forward to fight against these riders again.”

You’re in a factory team now. How big of a difference is this for you?  “Big. There are a lot more people working in the factory team. Everything is more professional, more precise. Yamaha really has a great program, which started in EMX125 for me. Each step you make, from EMX125 via EMX250 to MX2, it gets better and better. Last year I was already in a really good team, but now things are even better. On every aspect. I only have to focus on one thing: racing.”

You broke your collarbone in the beginning of the year. Is it completely healed?  “Yeah, yeah. It’s completely like new. It’s never a good time to pick up an injury, but to be honest: this injury allowed my body to have some more rest. Not bad at all because the championship was postponed a few times because of covid. Without the injury, I might have been pushing too hard already. I like to train hard. Sometimes too hard. I’m working with a new trainer this season, Kenny Vandueren. I already learned a lot from him. I thought: the more I do, the better I will be. Wrong. You also need to take enough time to recover. Now I realise that everybody has his limits.”

You rode two preseason races: Crisolles and Ernée. Happy with the results, the feeling on the bike? “Pretty happy, yes. On the physical side, I feel really good. I’m stronger than last year. I’m also really satisfied with the set-up of the bike. I feel one with my Yamaha. In Crisolles, as well in Ernée, I had one great start and one mediocre/poor start. I have to work on that. Like I said before: you need to have good starts to get good results.”

This will be your rookie season in MX2. What are your goals?  “First of all I want to gain a lot of experience for the coming years. It will be important to stay on the bike, to stay injury free because we will have a lot of races in a short space of time. Of course I want to fight with the top guys as much as possible. I hope to get on the podium in some races, maybe even win a race. A GP win? That would be great, of course. But I don’t want to rush things. This is my rookie year. We go step by step.”