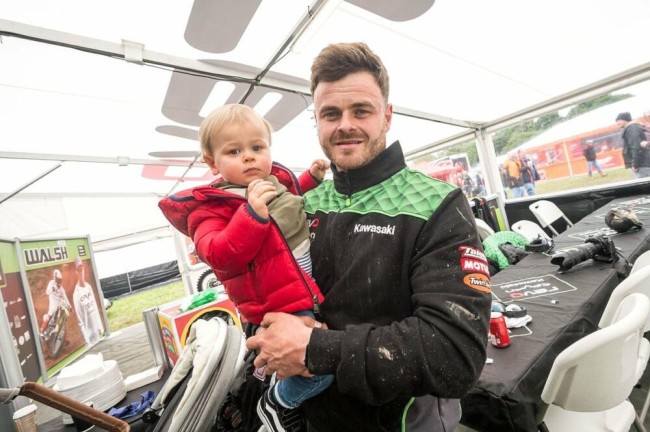 The 2023 season will be an exciting one for the GTCI Revo Kawasaki team as they will contest the West Coast 250cc AMA Supercross season with Dylan Walsh as well as the British Championships. The team have signed up Tommy Searle who has won three MX1 British championships in a row and Revo will be hoping he can make it a fourth with Walsh also challenging for the MX2 championship.

The team have also invested in the future with the signing of exciting British talent, Billy Askew.

We caught up with Sam Yates to discuss the team, season ahead and more.

GateDrop: Sam, let’s start with 2022. You contested wildcard AMA SX rounds. How did you find that experience as it’s totally different from Motocross but the team and Dylan showed good potential…

Yates: We actually entered the complete West Coast so not technically a wildcard but definitely a rookie. We started off on the back foot a little as we opted to ship our bikes and parts from the UK instead of acquiring bikes in the states.

The flight crate was delayed by over a month which led to very minimal testing before the first round. We did eventually buy one bike from a dealer and fortunately enough we had a race engine with us. The crate finally arrived which allowed us to get on with testing. The overall experience was brilliant, Dylan improved every week, and the results were consistent.

GateDrop: I am sure you learnt a lot from the experience – what sort of things did you learn and that should set you up better for 2023 and it’s exciting you will do a full series…

Yates: For sure, we have had a lot of time to develop the bike over the 2022 season which has given us a great opportunity to be more competitive for 2023. Dylan and I will be heading out stateside on the 1st of November to start training and testing, that will give us way more preparation time to come out swinging at the opening round.

The main thing is that we have set a separate team in America alongside Cari Schehr at Grindstone compound. This allows us to keep the focus back home on the season testing with Tommy Searle and Billy Askew. The US team name will be Revo Grindstone Kawasaki.

GateDrop: You guys have obviously competed in MXGP in the past but now focus more on AMA SX… What’s the reason for the change of direction? Do the AMA support teams better?

Yates: Yes, there’s a few reasons, the MXGP’s were getting repetitive, there is no prize money for the riders, you spend 100’s thousands and get little to no reward as a privateer team. However, there is price money, bonuses for even qualifying at the Supercross. The stadiums are near on a sell out at every round. and the atmosphere is incredible.

America is also a huge market for Revo’s core automotive business, so it makes huge sense for us to compete there and extend our brand recognition.

GateDrop: For 2023, you have secured Tommy Searle to contest the British Championships in MX1 with Walsh in MX2… A strong team and the goal must be to challenge for both titles?

Yates: 100% the goal is to win both classes. Tommy is solely motivated to win the championship for the fourth year in a row. Dylan showed he has what it takes on numerous occasions this year.

GateDrop: How did the deal with Tommy all come around? I’m sure he wasn’t short of offers and you must be looking forward to working with him?

Yates: We have had a good relationship with Tommy for few years now and have spoken on and off about signing him, but nothing really came of it. This year was a bit different, things just slotted into place really well and it just felt like the right decisions for both parties.

GateDrop: Are there any plans for Dylan and/or Tommy to do any selected AMA outdoors? We saw Gilbert do some this year and it’s always cool to see…

Yates: We have spoken about it, Tommy is keen to do a few as long as we are in a strong position in the British, as that’s our priority. Dylan feels the same as well.

GateDrop: I believe there were plans to run 2 AMA SX riders but now the full focus will be on Walsh. What’s the reason behind that?

Yates: The original plan was to run a two rider line up, however, a few financial sponsors pulled out last minute due to the uncertain financial times. So, we decided as it is a new team setup with a smaller scale budget it would be wise to walk before we can run. The sole focus is on Dylan for the 2023 West coast lites series.

GateDrop: What’s your thoughts on the British Championship the past couple of years? When it comes to young talent development do you think anything can be done to help develop the next Searle, Mewse etc…

Yates: I think the British has improved over the last few years; however, it could be better. I am excited to see how things are improved for the 2023 season.

To be honest, it’s a difficult one, there’s loads of good kids out there but unfortunately there’s nowhere near enough teams anymore, due to lack of money coming into the sport from outside sponsors. It sucks to be honest. But that’s life at the moment. We have recently signed young talent Billy Askew to compete alongside Dylan and Tommy. Look forward to watching him progress on the big bike.