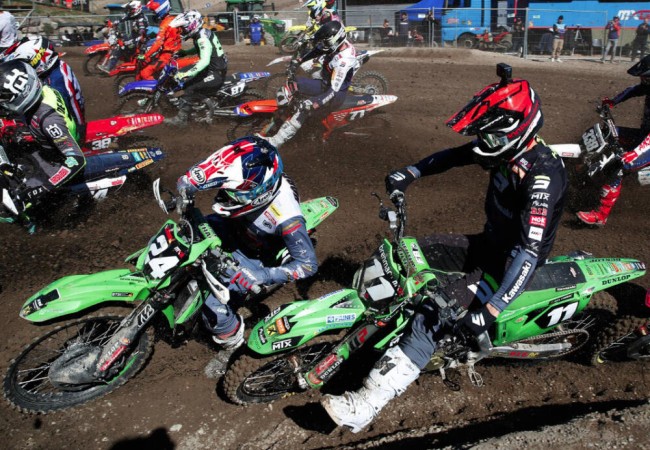 The FIM MXGP World Championship hots up over the next three weekends with GPs in Spain, France and Germany; Mikkel Haarup and Kevin Horgmo, currently fourth and fifth in the MX2 series, will be looking to bring Kawasaki yet more success.

Scandinavian countries have always been amongst the strongest forces in the history of the motocross World Championships, predominantly with Finnish champions such as Pekka Vehkonen and Heikki Mikkola and a host of Swedes from Bill Nilsson, Sten Lundin and Rolf Tibblin to Hakan Carlqvist, who culminated his final season in 1988 with an iconic double-victory on a KX500 Kawasaki at the Citadel of Namur in Belgium. Dane Mikkel Haarup and Norwegian Kevin Horgmo, each racing at the sharp end with Kawasaki in the MX2 series this year, are currently the hottest prospects coming from northern Europe and each has already achieved podium results this season. It was time to meet up with them!

How did you come to motocross?
Mikkel: “I started motocross at three-years-of-age. It was a little bit of a coincidence as I was watching my dad on a go-kart and I wanted to do it also, but they told me I was too young! I don’t remember exactly how it went, but we went to the local motocross track just to watch and a few days later my dad bought me a bike and I started riding in the garden. I started to riding for fun but at the local club people told my dad I had some talent and at a very young age I started beating guys on a 65; from there I began to race at the international level with a 50cc. To become a Pro rider, we had to move to Belgium, where I lived on a camping-site for a couple of months at the age of fourteen during the school summer vacation; that’s how I started to become more professional with a team. I was no longer training alone in Denmark and then a year-and-a-half later when I finished school we rented an apartment in Lommel and I lived there for nearly three years before moving to Holland for two years with F&H Kawasaki team. So since I was fifteen I have been far from home; it’s not easy but it’s a great experience and you grow up very quickly as you have to do basic things that usually your mum does for you. I think it’s fairly unusual at my age but I have always followed a strict discipline; I wash my own clothes, cook my own food. I have always been really careful with my diet; no pizza but chicken and rice nearly every day.”

Kevin: “It all started when I was four-years-old; I got a quad from my grandparents and I started training but when I had the opportunity to jump on a motocross bike I knew it was what I wanted! I went full-gas and had good balance riding on a small track. The next day I had a bike at home and from that moment it was more-and-more; my parents have been supporting me since I was seven-or-eight-years-old. I started training with Kenneth Gundersen until I turned fifteen-years-of-age and started to race all over Europe. Nobody in my family had any experience in motocross; my father was just doing some tuning but no racing experience at all. At the beginning we always did everything by ourselves to go to European races and then I was picked up by a Belgian team but still I had a training-bike at home and went to the races with the family. It was only in 2020, when I started to race GPs, that I moved from home to Italy; in 2021 I was racing for another Italian team and now I’m living in Holland near to the F&H Kawasaki team. In the early years I was always living at home with my dad as my mechanic so it was not easy to move away; there were some difficult moments living in Italy with a different culture, but it all helped me grow up quickly.”

Was moving from the European championship to GPs tough?
Mikkel: “That’s a big step, mainly mentally. In the European you naturally go from 65 to 85, then 125. That’s like a natural transition up to the EMX250 as well, but the decision to go from EMX to MX2 is something you have to make yourself; nobody can make this transition for you. I was in a strange situation in 2019 when I made my debut in MX2; we had a couple of pre-season races and I did really well, finishing second in Sardinia behind Prado and also on the podium at Hawkstone Park. So together with the team – Antti and Husqvarna – we decided to start in Argentina. My debut was unfortunate as I was sick; I didn’t know anything about recuperation and I came to my first GP with a 40° fever but it was an experience. I did a couple of GPs and then went back to EMX; I did well with a few podiums and then I was back in force to move back to MX2 with the F&H Kawasaki team.”

Kevin: “For me it was a big move. You have pressure as you need to perform if you want to keep your ride! The riders are more-or-less the same ones you grew up with in the 85 and 125 European championship; the competition is fairly similar too but it’s a big step mentally and competition-wise even if the tracks are the same for everyone. Last year I had no option to stay in MX2, so it was the best decision for me to step down to the European championship with a good team; that was the plan, to rebuild myself and hopefully impress some people to come back again to race the GPs in a good team. And that is exactly what has happened with F&H Kawasaki team this season.”

Do you have any support from your national federation?
Mikkel: “During my junior years it was just me and my parents; we didn’t have any experience of motocross, so we learnt by ourselves by just practising a lot and being focused on fitness and training. As I’m now back in Denmark I’ve built a relationship with the Danish national coach and the relation with the federation is now stronger.”

Kevin: “Kenneth was working partly for the federation when I was younger. We have one national team and sometimes we see each other but the sport is not so big in Norway so they are limited what they can do. I think that if you really want it then you have to leave Norway and try to be professional. Norway is in Europe but you need to make the step outside as we don’t have so many races or big tracks.”

Are you satisfied with your results so far this year?
Mikkel: “I had to wait a long time for my second career podium; almost two years to get another one after UK in 2020! Mentally it was really difficult because I was training as much as some of the best riders and mentally I felt I was at the level where I should be able to go for a podium at least a couple of times. So to go two years without gaining any podium was really tough mentally for me and I was searching why the results were not coming as I was putting in a lot of effort. I was wondering ‘what can I do in order to improve my results’ and that’s when I started to have a conversation with Kawasaki’s racing manager Steve Guttridge about what might be the right direction for me as I had a good relationship with Kawasaki. After two years with F&H Kawasaki team I wanted to continue my relationship with Kawasaki and we made the decision to go with Dixon Racing Team and work with Steve Dixon. So far we have got three podiums and are fourth in the championship which is a good start to the season. I believe that with the team and the support I have we are capable of winning a world title which is the main goal for the team and everyone. There’s still a couple of steps on the way there, but I’m young and I believe we can still improve a couple of things yet further.”

Kevin: “For sure we have worked for these results; it was the goal to do well but you never know before the races. I am now where I wanted to be for many years already. I need to be there every race; that’s not easy but we are working on it and I’m now making less mistakes. Since the beginning of the season I’ve proved that I’m fast enough but I was making mistakes. In the last few rounds I made less mistakes; I feel that this season I can do well on all tracks apart from in the mud like we had at Maggiora as I don’t feel comfortable with the ruts.”

With their two talented prospects, DRT and the F&H Kawasaki Teams are ready to move into the hard packed tracks and summer heat of the second half of the series fully motivated for yet more podiums on their KX250 race bikes!