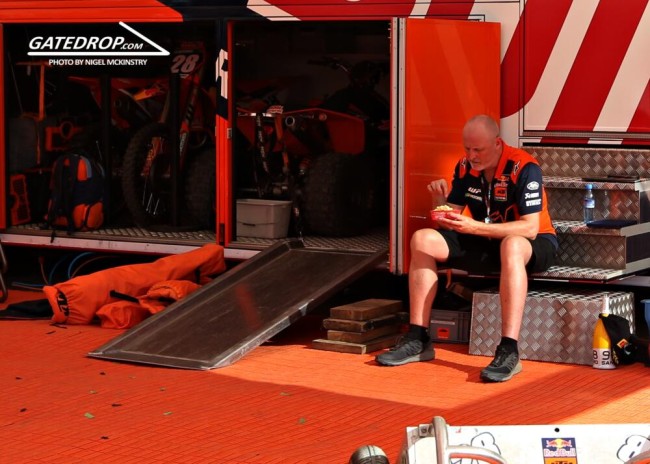 We caught up with Dirk Gruebel at factory KTM to discuss a difficult weekend with Tom Vialle despite still making the podium as well as the Frenchman’s move to the USA, plus get the latest on Jeffrey Herlings and the two new signings, Liam Everts and Andrea Adamo.

Dirk Gruebel, a hot day and a difficult day probably for KTM with Tom Vialle but still, somehow he ended up with a podium!

Yeah, we started on the wrong foot already yesterday when he had that crash and then the bars were too bent to continue, and it’s not really optimal to have the last gate pick. It went all wrong in the first race, the jump was not the best and he was outside and came out 17th, made his way up to 8th pretty easy but then he crashed and then you could see his riding with frustration, his rhythm was not really there, if you see your opponent half a lap ahead, it’s just difficult.

We regrouped for the second one, the start position was still not the best but he made the best out of it and he was fifth so that was really good from that gatepick. He was riding really solid and a bit fortunate with what happened around him but in a race like this, you just need to stay on two wheels and ride solid. I mean, sorry for Simon our Gas Gas teammate, he kind of blacked out with heatstroke it looked like, but these kids are young. We also saw with Kay de Wolf, he also hit the wall but saved it, that comes with age and experience. For us, we lost some valuable points today, that’s not good of course but we need to deal with it, there is still for races to go, we are still positive, it’s going to be a fight to the end.

Tom generally doesn’t make many mistakes, although this year maybe more than normal but when the pressure is on he is usually able to deliver, are you confident he can?

Yeah, a lot of stuff has happened lately. The decision with America is done now, that’s all in the head even if you don’t want to believe it. But this is off the table now and we focus on the last four races. We go there to win.

Regarding America, you probably wanted him to stay in MXGP like originally intended, how is that for you, you have Liam and Adamo coming over for MX2 so it is like a clean slate for you but Vialle in MXGP would have been a good addition as well.

100%. I am not happy that he goes there, I don’t want lose a rider like this. He is a great guy with a great family. One eye is crying if we let him go. On the other side he is young, he is French and they have that ambition, there was other guys there who did it before and if he didn’t do it now he would never do it. So he gives it a try, it takes balls to that, to move your whole family over there and start fresh on the racing scene, it’s different sport, a different lifestyle, hats off. Like I said, I would have loved to have him in MXGP that’s for sure.

Frederic (Vialle’s father) said it might jsut be a year or two and he might come back to MXGP, is that what you wouldn like to happen?

We need to see but I think once you are in that group over there, they stay longer than one year. Let’s say he does well, I don’t see him coming back after a season.

So you have Liam Everts and Andrea Adamo coming over next year, how does that affect plans for your off-season, is it longer to get them set up on the bike and get to know their personalities?

No, we always do the same, you go testing as usual. Many times we have three riders and now it’s three again, Andrea is on a Gas Gas, Liam on a KTM, these are our bikes already, not on this level of course, but it’s not completely new to them so the foundation is there and we just need to them comfortable on our bike – usual work.

They have shown a lot of potential this year, both Liam and Andrea have really risen, you must be quite excited to see what you and Joel can do with them?

Liam was a bit unfortunate to get hurt at the first round with a broken finger, that puts him back a bit and he was off the radar a little but but he is a good rider and a hard worker. We are all excited to get LIam and then when we start working with him we will see. I don’t think we go for the title next year still with these youngsters it’s a building year and sometimes you need to have that. We go for that, it’s a nice challenge again and take it from there.

And Joel and Stefan in the same team after being rivals – that could be fun for you! (laughs)

We will see how that is going to work. Stefan he has told me, ‘I want to be a dad as well at a point.’ So I worked with him before ten years ago, that’s the old chapter and I think you should open a new chapter called, Liam Everts.

Finally, I have to mention Jeffrey Herlings, he said in an interview with MXGP TV, that it hurts him just to watch the races, how is he beyond that and do you think it’s the right decision to do no races this year? I think a lot of people were hoping he would be racing Eli Tomac at Red Bud!

He needs to take care of his body now. It’s a really critical stage of his career, if he doesn’t watch out his career is finished earlier that usual. He should really watch out for his body, get this all fixed, get fit and then we know how good Jeffrey Herlings can be if he has a fot season.

By all accounts he was flying when he came back around May time, and he has this operation to get his bad foot fixed as well,. so you would think he will be all guns blazing next year maybe back to 2018 level Jeffrey?!

The thing is also, you shouldn’t forget, the injuries are adding up and every one takes it’s toll, it takes it out of you. You get older, you get more pain every day, I mean he has a super high pain level, don’t get me wrong but it still is annoying if you are never pain free. It’s not good for your brain, it’s not good for your body, if it always follows you it’s just not good. Hopefully next year we get a good year with him again, as fit as possible and I look forward to that.

We saw with Stefan Everts, he had a year out in I think 2000 when he broke his arm, he then won six world titles in a row, do you think this break will maybe help Jeffrey and he can do a Stefan Everts?

He’s not riding for the whole season, it’s been a long time he didn’t do that. He’s going to be so full of energy and anger, he will want to prove everybody wrong, he’s going to be on top of his game, 100%.