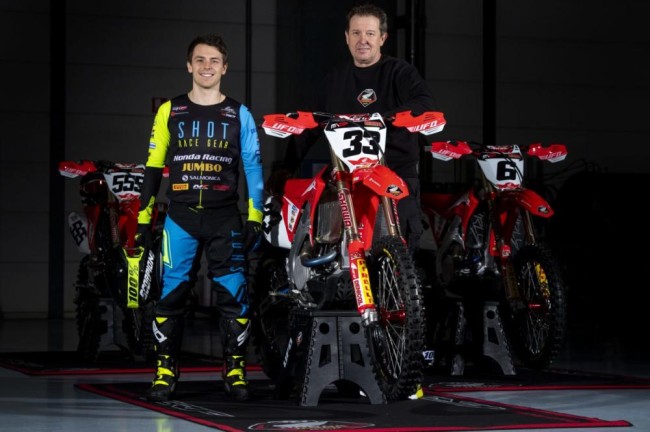 While the majority of riders were at least able to race the first two MXGP rounds in Great Britain and the Netherlands, JM Racing Honda rider Julien Lieber was unfortunately sitting on the sidelines. The Belgian was still recovering from a left wrist injury that had lingered from 2019 and the decision was made just prior to the season opener, that he would have a small surgery to make sure he was healed before he raced again. Unfortunately the COVID-19 situation has meant that his recovery has been a bit slower than hoped, but with racing still a few months away, the Honda CRF450R rider should be ready to come back after what will be over one year since his last MXGP gate-drop…

First off, how is the wrist injury?

It’s quite complicated because the virus happened when I had to start recovery with the physio, so I couldn’t go regularly to the physio. I think I only went three times. Now I have to do it by myself as he is closed, so I haven’t got my complete mobility back yet, but I still have a few things that I’m working on to make it feel better. I hope that I can go back soon though, just to finalise the recovery and make sure it’s going well but I’m not sure when the lockdown will be over so I don’t know when this could happen.

What is the situation in Belgium regarding the lockdown, what are you/aren’t you allowed to do?

We are allowed to go outside to buy food, and other few things, but for the rest you have to stay at home. You can do out to exercise, like cycling or for a walk, with only one friend or family. The rest though you have to stay inside. It’s difficult, and it’s made worse because in Belgium, the weather is not usually nice, but since the virus, the weather has been great so you want to go out and do things, but you can’t do them. We all just need to follow the government advice, stay home, stay safe and then when this situation is over, it will feel that much better to be able to do these things again.

Let’s go back to November 2019, when you announced you’d be riding for JM Honda, how excited were you to be with a new team and doing MXGPs?

I was really happy, because I was in a good team last year and then I got injured at completely the wrong moment. I was riding well and getting decent results and then I got injured. So I had to find a new team, which is difficult because the championship is so expensive so a lot of the teams don’t have a good budget. I knew that Jacky Martens had a lot of experience and that he always had a good team so I knew right away that it would be a good team for me. Also, we are both Belgian so that makes things a little easier.

This is a new team for Jacky though, so were you nervous about that, or were you confident that he knew what he was doing?

I was confident with him. I trusted him and I knew that the Honda was a good bike. They are all good bikes but the Honda was proven to win races. Straight away we had a good relationship, he explained a lot of things to me, like how we work, how things worked before, technical things and what is possible for this year. This gave me confidence and I was happy that I could make that move.

You rode Hawkstone and got fifth overall, how was that, having not ridden since June 2019?

It was a good to back behind the gate. The conditions were really tough with the weather but it is always good to get back behind the gate and see all the riders. You need that competition to prove to yourself and to see where you are with your speed.

Then two weeks later I did the race in France, but my wrist was hurting too much then. I did a lot of training in sand in the winter and it wasn’t too bad. However on hard-pack, the bumps and the jumps, I felt a lot more and it hurt badly. After that, I knew that I wouldn’t be able to do the whole season like this so I decided to do something.

You said you were going to miss the first three MXGPs originally, knowing that we only ran two events, would you have changed your mind and ridden them?

No, I would have done the same. In this position, you can never imagine that this virus would have come and messed everything up in just a few weeks but I had to do it. If I didn’t do it, I would have that pain the whole season, the whole time and perhaps all my life. Sometimes you have to decide to stop and then come back later. It isn’t easy but that’s what I did and I’m still working on it to make it 100%.

When do you think you are going to be ready? Normally you’d look at the calendar and say you want to be back for race X or Y, but right now the calendar isn’t so accurate, so what are you aiming for?

Yes, it’s strange. At the moment the next race is July but that isn’t definite. Now I can ride, but I don’t have complete movement so it wouldn’t be good. I think that in one month it should be better and I can ride properly, without any pain.

How are you staying fit, and how are you training?

I do a lot of cycling because I can’t run, due to previous injuries. I do some trial biking in the woods, and just some general fitness. I can’t swim either so mostly it is just cycling on the roads. It’s a strange situation because I want to go back on the bike but if I train too hard now and the season only starts in four months, then it is a bit of a waste.

What’s your strategy? Are you trying to get as fit as possible, or are you gradually working and then when we get a start date, you will step it up for that?

It is very difficult because you don’t really know what to do. Some weeks previously, you think you have to be ready and start training really hard because the season could be close to starting. Then you hear that they have postponed some more races and you have to start later. Then you change your programme again, so it’s more a case of just keeping your fitness and I think that we are finally sure that we will race, I can start increasing my level and be ready for that specific date.

Have you been paying attention to all the new calendars and the changes or are you just concentrating on yourself?

No, I check a lot and I see a lot on social media if things have happened. Every day I see what MXGP put on their website or Instagram, to see if things have changed because I want to know what is happening.

What are you hoping for with the calendar? The last one they released was going to have 18 races in about 22 weeks, is that something you’d be okay with or would you prefer the usual structure of two/three races in a row and then a weekend off?

Honestly, I’d be okay with the new schedule. And if they did this for the normal season, I think it’d be good to have more races in a row, like five or six races before a week off. That would shorten the season and then we could have a longer break in the winter, rather than the current season that stretches things out over a long time.

And lastly, how do you think you will do, when we hopefully get back to racing?

I know it will be difficult because it will be more than one year without having raced an MXGP, because of the virus and injuries so it will be tough. Coming back to racing, it takes time to find the rhythm, because training only does much, you still need to find that intensity for racing with these guys. There will be pressure in the beginning too, but I want to start with patience, without too high expectations and then work from there.