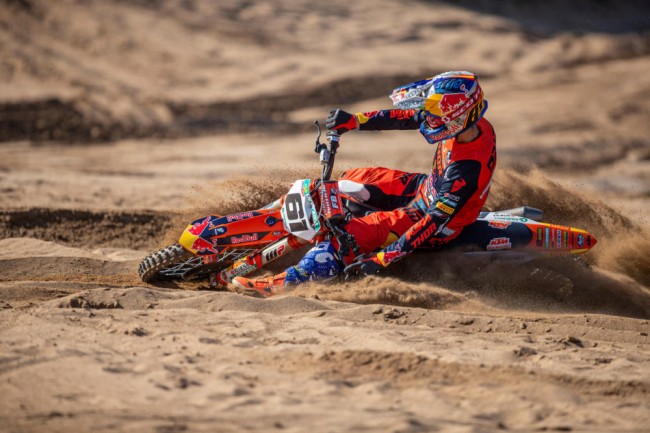 Still only 20 years of age Jorge Prado has already tasted victory with the KTM 250 SX-F in MX2 – where he dominated the class to 2018 and 2019 world championships – and the KTM 450 SX-F in what was a typically fast and impactful debut term in MXGP in 2020. Already Spain’s most decorated motocrosser, Prado set out his stall last year with three wins and eight podium finishes, the second biggest collection of silverware in the class, despite coming into the campaign with limited preparation due to a winter leg injury. Now fit, confident and ready to re-establish his world-renowned starting prowess in MXGP #61 is one of the pre-season favourites.

2020 was your first in MXGP. It’s fair to say there were some ups-and-downs…2020 was quite a hard season for me because getting injured just before the start of my first year in the premier class didn’t help! It meant I started racing without much training or testing. Despite that, I had some very good moments, especially towards the end when I was getting fit and winning races. At one point I even had some possibilities for the title, so I was quite happy. Overall, I would say that 2020 was good season but I could have done without the two injuries. The best moments were the first podium, the first win on the 450 in Italy and the victory in Spain.

What was the biggest lesson?Coming into a season from injury is never easy because you need a certain amount of track time to get back to your level. I pushed myself to the limit in that ‘recovery’ phase where I was actually racing to get to 100% as fast as I could and make some good results. So, the lesson was about how I could reach my limits physically.

Did you feel like you had mastered the KTM 450 SX-F by the later phase of the season?It’s a hard question because I missed that training period. I didn’t get a pre-season. Then we had to stop because of Covid-19 and two weeks before the restart I was injured again with my collarbone! I raced in Latvia for round three with just two weeks on the bike. By the end of 2020 I was finally getting there, and you could see that in my results because I was fighting more and more for first position. I think I learned so much from that period and where I needed to improve. Now I feel like I am getting into my first real off-season of 450 preparation.

You always seem like a confident guy but did the 12 months of 2020 – from the broken femur to the COVID-19 diagnosis that prematurely ended the season – represent the hardest spell of your career?Yeah, 2020 was one of the hardest of my career. I moved to the 450 class as the 250 champion and with high expectations, at least for myself. I was expecting good results and the injury threw me a bit. The 450 is a very nice bike to ride but if you need to push it for the whole 30 minute plus two laps moto then it is not very easy. You have to be really ready for that. It’s not easy to ride those bikes fast for a long time; you really need good physical condition.

Who will surprise you in 2021?Hmm, I don’t know. I think Jeffrey [Herlings]! For sure Tony [Cairoli] will be good, also [Tim] Gajser and [Romain] Febvre. Surprises? It’s hard to say but if you look at every year there are always questions about who will be good but, in the end, it is always the same guys at the front. I feel like I am also in the group. Not because other people are saying it but when I see the results. I’m not a guy that really builds myself up but if I look at the results of last year then I have to be honest and say: ‘this year I can fight for those positions again and I need to be ready’. My goal is to fight for the title and that’s it.

Supercross: it was a career direction for you at one stage. You are still only 20, so how do you feel about it now?Honestly, I am really focused on doing very well and getting the title in MXGP and, watching supercross right now, I feel that it would be something very fun to try. It would be very different. It would not be easy at all to go and get to a position to fight for a title. You not only need to get used to riding supercross at that level but also racing it. I’ve never raced supercross in my life. It would be very hard! I think if I did have the possibility to get there and race then I will want to go, and I would want results. Right now, I’m looking only at MXGP.