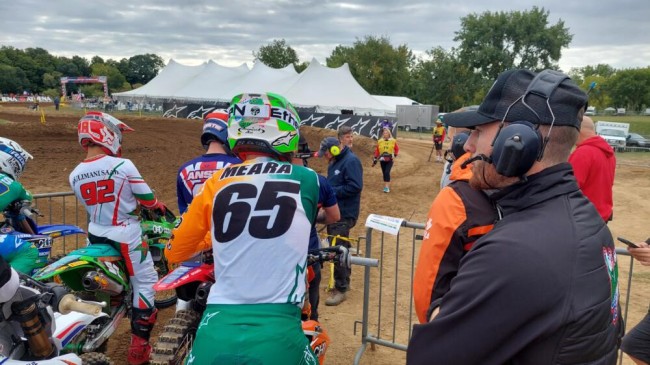 John Meara rode fantastic on the Hitachi KTM at his first ever MXoN but unfortunately Ireland’s luck was out despite having three riders fast enough for the A final. Meara took 17th in a deep MX2 class on Saturday then finished ninth on the 250 in the B final to show he had no fear of the competition and the speed to compete.

We caught up with the Ulster MX1 champ to talk about his MXoN experience at Red Bud and a very successful season after two years out of action.

John, you were riding brilliant both days and a great experience I am sure, but ultimately things didn’t go the teams way, it was very fine margins both yesterday and today, Sunday.

Yeah, there wasn’t many points in it both days. Unfortunately Martin had bike issues yesterday and also on the first lap of the B final today. The speed was there to be in the A final and to battle with them guys but personally I had an awesome experience. Mark and the team done absolutely fantastic organising everything, can’t say a bad word about it and just want to thank them all for what they have done.

We all gave it our all but unfortunately we all fell a little bit short this year.

You weren’t intimidated by anyone, Jo Shimoda was battling there around you in that B race and yesterday you were on the gas both days, you must be pretty pleased with your speed!

Very happy with it. Jumping back on the 250, a lot of guys back home were saying that they should have been picking 250 guys, this that and the other, but I proved what I can do. I don’t get intimidated by anyone, they are the same as me, they are only human at the end of the day, yeah it was a really, really good experience.

And you were basically a factory rider for the day, Hitachi KTM and the Rocky Mountain ATV factory rig, it must be a pretty cool experience in itself?

Yeah fantastic, I have just soaked it all up and taken it all in from I got here. I have had the best experience I have ever had. Yes, this is my first, but I hope it’s definitely not my last.

On the bike… how much of a help was a GP level bike? It showed with your speed out there what you could do with it!

Yeah, it’s absolutely phenomenal, the bike it so strong. Them guys put an awesome package together, massive thanks to Brandon and BC for coming over to help me out this weekend, also to Roger for lending the bike. Just want to say a massive thank you to my mechanic Stuart, for being here and giving a lending hand all weekend, he has been really good.

Just on your season overall, Ulster champion, then you did that British champion on not even your own bike and got third, that whole weekend must have been a bit mad for you and pretty special!

Yeah it was crazy. We won the Ulster and then we were running late for the boat, got a couple of hours kip in the back of a sprinter in the car park. Me, Stuart and Dave, we all roughed it, we then got to Whitby and the track was absolutely soaking and we were scratching our heads wondering why we even came!

I rode the first race with two punctures and got 16th and then the second one I got a good start and was able to show my speed. I hung it out in second for along time, had two crashes, dropped to fourth then got to third in the last lap again. The season in all has been really, really good it has been a step forward I think. Obviously I have had two years off the bike from competitive racing..

Ireland’s John Meara giving it absolutely everything in the B final on the 250 for a top ten: pic.twitter.com/920Yzvem3K

Did you expect to be so quick after two years out?

I didn’t expect it to come so quickly but I know what I’m capable of, it lit a fire in me that I really wanted to do it again, I am going to go back home and back to the drawing board, I don’t know whether we will go 250 or 450 next year yet. We will see what happens, I would love to get a ride obviously in the British championship and get a wee bit of help because it’s expensive coming across from Ireland every time. I think my results in the last British championship will help that, also, my speed here today, beating some very, very good guys, so we will see what happens.

Do you feel this is your best year ever? You have had a lot of speed previously but a lot of times you end up injured or have bad luck and this or that, but this year was probably one of your most consistent.

I have always had the speed from a young age, but I was crazy back then! I never thought what I was doing riding the bike. All I knew was turn the throttle and hang on, if the bike stepped out I was willing to go down the track! Whereas now I am a wee bit more calculated, I think about the risks I am taking and overall it has helped my riding.

Listen to all the team Ireland interviews on iTunes here or below: