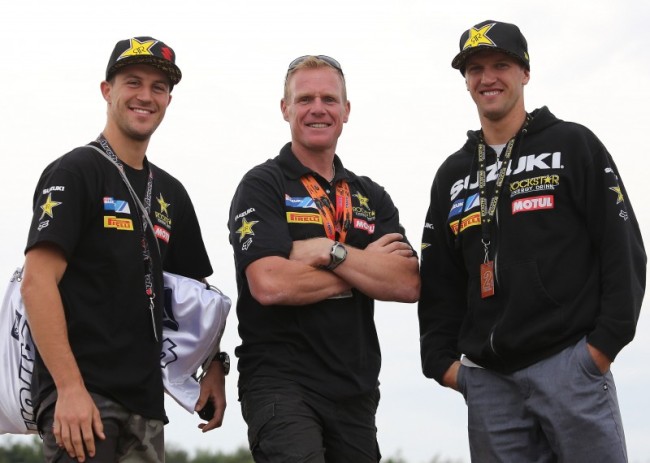 Smets really believes in all his riders and his infectious enthusiasm will undoubtedly have a positive effect on motivating his chargers even in difficult times throughout the season. And, as the pre-season races are showing, the Suzuki boys are in top form as they head to Qatar for the opening GP of the season!

With Qatar only two weeks away, we spoke to the friendly and chatty Belgian about the pre-season preparation and to find out his thoughts on his three MXGP riders, Clement Desalle, Kevin Strijbos and rookie Glenn Coldenhoff.

Gatedrop: Has your work with Desalle, Strijbos and Coldenhoff been going well over the winter?

Smets: Yeah very well, the only thing is Desalle is mainly doing his own thing. So I am working more with Strijbos and Coldenhoff and also a little bit with Seewer in MX2 as well, but we have done a lot of work and it is going really well.

Gatedrop: Kevin has a lot of talent and at the start of his career it seemed he was destined to be World Champion, that hasn’t happened yet so are you working on the mental side with him, he seems to be a confidence rider and right now after his performance at Hawkstone, his confidence seems to ve very good.

Smets: Yeah we are working on the mental side. In motocross it is the complete package, the mental thing is not something you can turn around from one day to another, you have to make him believe in his talent again. That was the problem with Kevin, he had forgotten how good he was because of injuries and with new riders coming up. In the past he achieved his results mainly with talent rather than hard work, so I have tried to explain to him that talent only is not enough to win a championship. He has been second two times but that last step is character and hard work is needed as well and that is what I have been trying to work on.

Last year he did really well, he was fighting for podiums all the time. He didn’t win a GP yet but he came really close a few times. I think he is on the level again to win GPs and it’s hard to say whether he is going to get his act together for a whole year to fight for a championship. But at least he must be able to win a GP.

Gatedrop: With Glenn Coldenhoff coming from MX2, he is a smooth rider and had good results at Qatar last year what are your expectations for him?

Smets: That is another story, we know there are a lot of big names in MXGP right now, so it would be stupid to tell Glenn he had to be top five, that’s not realistic I think. With him the aim to to infiltrate in the top ten, on bad days finish between eighth and twelfth on bad days and on good days let’s say, between third and eighth on good days.

Gatedrop: Just regarding Clement, he is obviously one of the contenders for the championship and was looking good until he got hurt last year. Does he believe he can win the championship?

Smets: I think with him it’s a little bit the same (as Kevin). I think in the past he believed he could win the championship but he has never really put in the work that is needed to win the championship. Not that he is lazy, he has his own way of working but we believe that was not always the good way. Once again it’s nothing to do with him being lazy, but the way he did things could be better we believe. I think he understood that and with Villopoto coming in he knows he has to take the next level if he wants to win the championship. I think he has went a level up, he is definitely going to be a contender, I am sure about that. He is a fighter, he is a strong character, not always easy to work with but on the other hand he is very ambitious and for sure he has not given up on the championship. He only turned 25 and he is young enough to give it a go.

Smets: It is going to help it a lot. There is going to be a lot of interest from the motocross society. But motocross is not really mainstream. Even Marc Marcquez and Valentino Rossi are not well known in Belgium, road racing is not popular in Belgium. If you go on the street in Belgium and ask who Marc Marquez is, nine out of ten people won’t know who he is. In motocross the fact Villopoto is coming, if I ask people in my village, they won’t know who he is.

Gatedrop: You battled with an aggressive American, Trampas Parker, you have battled the guy to beat, Stefan Everts, and you have won five titles yourself. You have been in all these situations that will face your riders this season, so are you able to pass on that experience to the riders?

Smets: They are the ones that are on the bike and once they are on the bike you can’t do anymore but for sure when we are heading to the races I can anticipate on several aspects that might happen. I can help with race strategy, how to stay calm, how to keep the confidence. I can talk to them about my experiences, and mistakes I made and you help relax them. I don’t judge myself more important than it is. But when it comes to championships it is details that make the difference and if I can make the boys 1,2,3 per cent better then that can be the difference between winning and losing.

Gatedrop: Do you feel during your career that despite winning your titles in the 500s, that compared to Everts, Albertyn, Tortelli who were winning titles in the 250s that they got more respect. I know it wasn’t until I seen you race in person that I really realised just how good you were. You seemed to be always battling in the early part of your career to get equal respect?

Smets: Yeah that seemed to be the case. When I was winning my first championship I was definitely underrated.  I was racing those guys in International races and I was often beating  them, I raced a lot of international races in my early career and I could beat Pichon, Everts, Bervoets. So I was definitely underrated and that frustrated me through those first years, it got better from 2000 on but it was difficult to accept. Because I was on the same level as those guys and it was pretty hard to see the focus being on the 250 boys in those days.

But I have proven often enough that I was on the same level and even better sometimes. I am happy when I talk to people now, from the press to the public. For example when I go to Hawkstone park and walk through the public, people tell they remember this race or that race and they have respect for what I did and I would be lying if I said I didn’t like that. It’s nice to see the people remember the things you did and the results you had, and what a good rider you were.

I think looking back people realised what I achieved, but I am a really modest and down-to-earth type of guy and even with the people I am working with they forget what kind of career I had.Kevin knows because I raced with Kevin, but Clement is five years younger and Glenn is even younger! So sometimes when we are on the road talking BS and we talk about that things that happened to me, they go, “whoa, did you do that,” or “did that happen to you?” so that is pretty cool!