Interview: Håkon Østerhagen on the EMX125 series and his strong start to the season 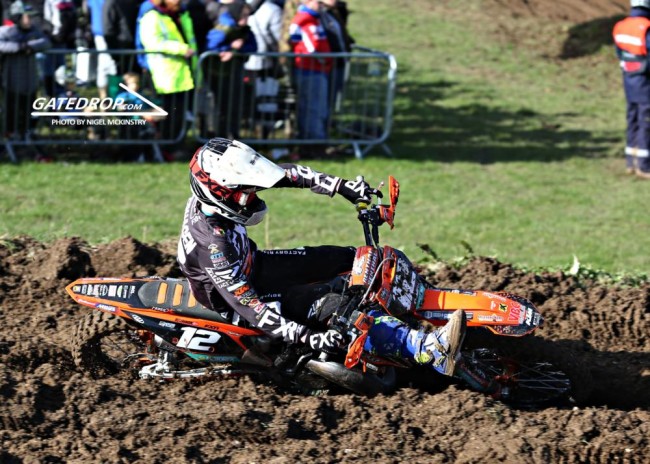 Last year was Håkon Østerhagen’s first year in the EMX125 class and as a rookie it’s important to learn as much as you can even if the results aren’t what you expect and that’s what the young Norwegian has clearly done. Østerhagen went away and worked hard over the winter and if the first round of the EMX125 series this year is anything to go by, he’s going to be at the sharp end of the class.

A 7-4 scorecard at the opening round in Matterley Basin was a great start to the season for the CreyMert KTM rider and he’ll be looking to bring that form when the season gets underway again but he should be confident after his riding at round one.

We caught up with Østerhagen to get his thoughts on the EMX125 series, his start to the season and more

Gatedrop: Håkon, let’s start with 2019 your rookie year in the EMX125 class which is very competitive. How did you find your first full season in the class?

Østerhagen: Well, my first rookie season in the EMX125 series was terrible to be honest. I crashed all the time and was not always focusing or thinking about my riding.

Gatedrop: How would you describe the level of the EMX125 championship?

Østerhagen: This year is a little bit easier because all the big guys that where top three last year are now in the MX2 World Championship or the EMX250 series, but the level is still very high.

Gatedrop: The CreyMert KTM team decided to keep you for the 2020 season, it must feel good that they clearly believe in your abilities?

Østerhagen: Yes, my boss said that he believed in me and said that I am going to do great things, I am very happy that they wanted me again for the 2020 season.

Gatedrop: Over the winter what did you get up too and what areas did you try and improve on? Would you say you had a good winter?

Østerhagen: My winter was one of the best, I was in Spain with my trainer Kenneth Gundersen and we were doing some really good training on the track and outside the tracks.

Gatedrop: At the opening round of the EMX125 series this year you went 7-4 for overall, you must have been really pleased with that and what was it like to ride in the top five?

Østerhagen: That is something I have dreamt of doing. It was one of my best days in my life to get a top 10 and a top 5.

Gatedrop: Did you surprise yourself at the opening round of the series, what where your expectations coming into the season?

Østerhagen:  Of course I had bigger expectations this year, I am stronger on the bike. I am thinking much more about my riding so I was expecting to be better during the first round and the next ones.

Gatedrop: After such a strong opening round, what’s your expectations for the rest of the season – a podium?

Østerhagen: I am going for the podium. I am working so hard to get there and with the help of Kenneth I hope to get there soon, to get a podium would be a dream coming true.

Gatedrop: Being a fellow Norwegian you are friends with Kevin Horgmo, do you ride much with him and what sort of things have you picked up from him?

Østerhagen: Yes, myself and Kevin are quite good friends. Him being in the team the first year was helping me a lot, it was so much easier with him. Every time we went on the track he always had something for me and him to finish when we was training together. We don’t train so often anymore at the track. But it can happen that we meet at a track or something.

Gatedrop: Since the Coronavirus outbreak what have you been up too? You must be looking forward to racing again!

Østerhagen: It is so boring to be home, not going out and riding makes me a little angry. The track and the gyms – everything is closed. For the moment at home I am just doing school work and training to get stronger.