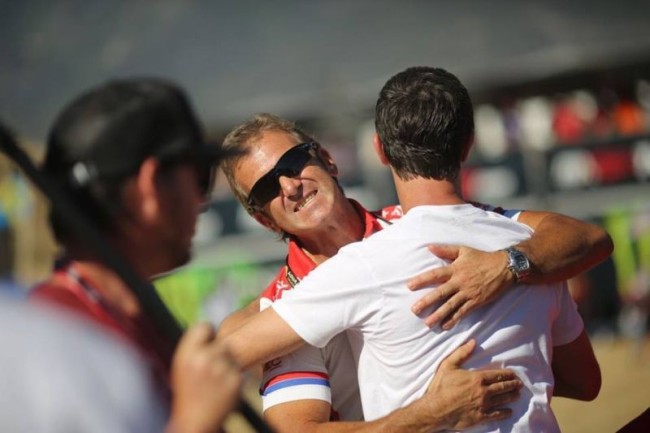 Giacomo Gariboldi is the man responsible for the Gariboldi HRC Honda team. They first came to the GP’s with a rider line up of Harri Kullas and Christophe Charlier after the team helped him win the European Championship from Jeffrey Herlings. Since then, there has been many changes to the team as they are now a factory team in the MX2 world championship with good support from HRC Honda.

Giacomo has always tried to sign the next up and coming talent as he wants them to fulfill their full potential. He has worked with riders such as Harri Kullas, Christophe Charlier, Klemen Gercar, Alex Tonkov and Max Anstie etc. After KTM decided to let Tim Gajser go it didn’t take Gariboldi long to sign him and they have got the best out of him as they both now have a World Championship to their name.

2016 presents a new challenge for the team as Tim will move up to the MXGP class. The team have ran an MXGP rider before in David Philippaerts so they have got some experience in the class, it will be a learning year for Tim but long-term they hope he can be MXGP world champion. Alongside Tim they also have talented riders in Jorge Zaragoza (MX2) and the recently signed David Herbreteau who will race the MX2 world championships except for the first four oversea GP’s.

We catch up with Giacomo to discuss Tim’s amazing season in 2015 and expectations he has for the 2016 season.

Gatedrop: Did you expect Tim to win the title last year and how did it feel when he won the championship?

Giacomo Gariboldi: Honestly the goal set from Japan for Tim in 2015 was a top3 finish, the win of the championship arrived one year earlier! The feeling was really unbelievable for everybody and something you would dream of after many years of full commitment in the GP’s.

Gatedrop: It was a surprise to hear that Tim will move up to the MXGP class – how did discussions come about for this to happen?

Giacomo Gariboldi: This was a request which came first from HRC in Japan, they want to win the MXGP class as the main target and they feel Tim is the guy who can do it. Tim obviously was very keen to accept as he loves the big bores and always trains on a 450 and raced the last two MXON on a 450 so it was just a matter of time to jump on it after the title. Why should you defend a title you have already won when the target is to win the top class?

Gatedrop: What are your expectations for Tim in the MXGP class?

Giacomo Gariboldi: Tim will not have any pressure for his rookie season in MXGP, he will take 2016 as a learning year but of course he can score podiums. Anything which will come will be very welcome by the team and from HRC side. The goal is to win in three years time.

Gatedrop: How is Tim Gajser to work with?

Giacomo Gariboldi: Tim is the most fantastic rider and person you can ever meet, it’s really easy to work with him, I wouldn’t ask for better!

Gatedrop: Will Tim be getting the same support from Honda and HRC that Gautier and Bobby are receiving?

Giacomo Gariboldi: Tim will have exactly the same support and bikes of Gautier and Bobby, he is a factory rider as the other two guys and he is signed with HONDA till 2020 so I believe HRC is making an heavy investment on him.

Gatedrop: How did the deal with David come about and did it take long for the deal to materialize?

Giacomo Gariboldi: The history of the team is always signed by young talented riders taken to the next level as we did with Charlier, Tonkov, Kullas, Anstie and of course with the World Champion Tim Gajser, so we felt that David was ticking all the boxes and we are sure he could be the next top french rider.

Gatedrop: Is the deal with David long term and what are your expectations for him?

Giacomo Gariboldi: The deal with David is on a long term and we just want to take it easy at the beginning without flying too high, we have signed also the well known Bruno Losito to train him and look after him day by day so we are confident that David already in 2016 will step up to the next level and from 2017 he will be ready to go for the top 3-5 in MX2. He has 5 years in the small class so we have time to win with him.

Gatedrop: The plans were originally to put David in EMX250 but you have now decided that he will do the MX2 World championship except for the first four oversea GP’s. What is the reason behind this?

Giacomo Gariboldi: Over the last couple of days we realized that the commitment for the team would be the same being the emx250 on the same dates of the european MX2 calendar and for David, it would be more interesting  to compare his speed with some of the top riders in the World Championship rather than losing one year trying to win the EMX250 which is not a target for the team. In this way he can progress faster and be ready for 2017.

Gatedrop: Jorge Zaragoza unfortunately got injured last year, what are your expectations for him in the 2016 season?

Giacomo Gariboldi: Jorge is one of the highest talented riders I have ever seen, unfortunately he got injured last year before the start of the season and this has limited him a lot, on the other side we expect to see him training more and better than what he is used to, because when you get to GP’s the talent on his own  cannot win races! We expect to see him in the top 5 in 2016 and if he couldn’t do it will be disappointing.

Gatedrop: Now that Jorge isn’t the only rider competing in the MX2 championship it should help him as he will not be under as much pressure?

Giacomo Gariboldi: For sure for Jorge it will be stimulating to have another rider in the team in the same class and hopefully he will push forward his limits.

Gatedrop: Finally, what is your opinion on the MXGP calendar for the 2016 season and are you a fan of the fly-away GP’s?

Giacomo Gariboldi: I really think we are going in the right direction with a real World championship with many continents and new countries, YOUTHSTREAM is doing a great job to promote our sport!