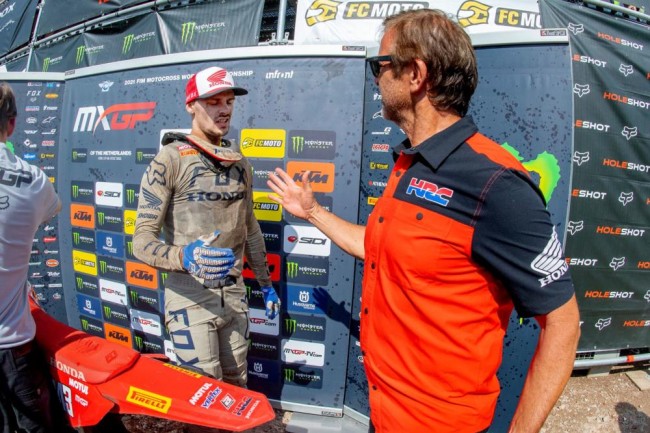 Giacomo Gariboldi is one man who has plenty of experience in the Motocross world as not only is he the owner of the HRC Honda MXGP team but he’s also took Livia Lancelot under his wing and helps with the 114 Motorsports Honda team.

Gariboldi has a great eye for talent after picking up Tim Gajser who has now clinched four World Championship titles and now the hope is that Ruben Fernandez can follow in his footsteps within the Honda family. The Spaniard has had a great start of his Honda career in the MX2 World Championship this year and looks to be a fantastic signing for the 114 Motorsports Honda team. If he keeps developing and improving we might see him under the MXGP Honda awning in the future!

We caught up with Gariboldi to discuss the start of the 2021 season which has produced some amazing races and if gives us some breaking news on Ruben Fernandez contract situation.

GateDrop: Giacomo, what a start of the season it’s been for Honda in MXGP and MX2! At one stage both Tim and Ruben both had the red plates, that must have been a special moment?!

Gariboldi: Yes, a really exciting start of the season! It never happened in history that Honda was leading the two championships in Europe and it has been very very special, but that was the first step, now we want to get back the plate in MX2 and keep both until the end, if it’s not this year it will be the next one but this is the goal.

Nobody thought that we could win with a Honda in MX2 in 2015 and we did it with Tim and probably nobody thought we could beat the KTM army in MXGP but we did it 3 times and now maybe nobody thinks we could win both titles MX2 and MXGP in one season but instead I really believe we will do it one day.

GateDrop: On Tim Gajser, those first four MXGP’s, not only was he incredibly fast but he was also very smart. You must have been happy with his start of the season and possibly that’s the best Gajser we’ve seen in his career?

Gariboldi: Tim had the best start of the season ever this year and showed amazing speed in Russia and England and has been very consistent in all his races and he is at his best now. He is more mature and experienced and knows what he needs to win titles, having said that, we don’t have to forget that he is still only 24 and he can always get better and improve.

GateDrop: At Loket he had a huge crash but thankfully he was able to get back up and salvage some important championship points. You can’t question his determination!

Gariboldi: Tim is a fighter, he never gives up, even after hard crashes like he had in Loket. He is back on the saddle giving everything, this is why I know very well that when he has the red plate he will keep it until the end. Sometimes things can go wrong, everyone out there makes mistakes because they are riding on the edge so we have to accept that we cannot always win. To win the war you have to go through many battles and try to win most of them. 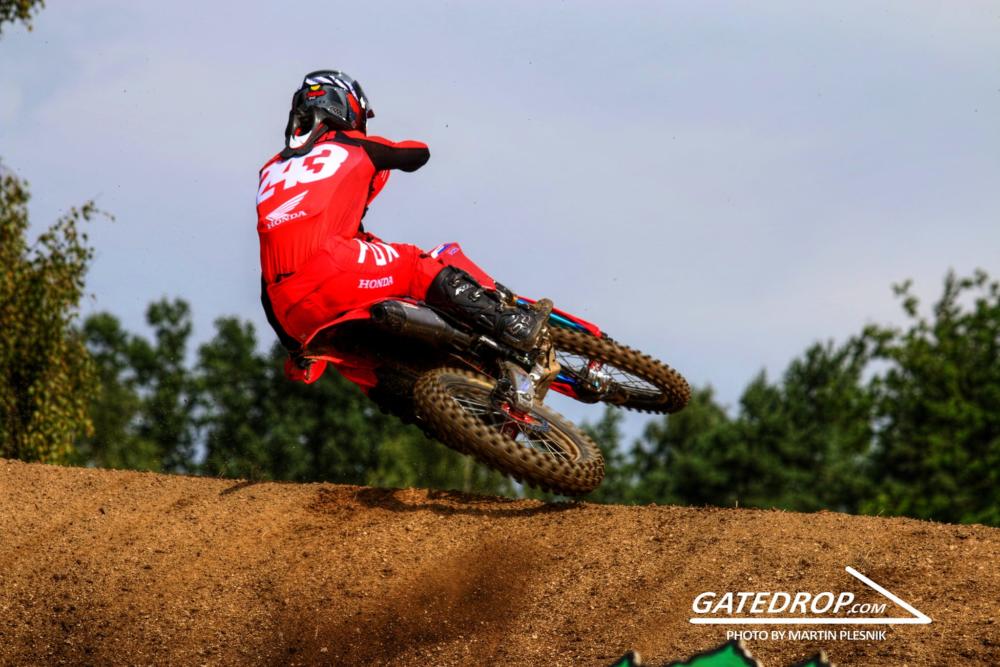 GateDrop: On MXGP this year, the racing has been great and the level is really high with Gajser, Febvre, Cairoli, Prado and Seewer etc – what have you made of the season so far?

Gariboldi: It’s a great season and we just hope that every rider will stay injury free until the end because we love to see those battles, the level is very high and we have at least 5 riders able to win a moto and you need to start in the top 3 if you don’t want to take many risks to pass riders in front like what happened to Tim in Loket. Some races have been much more exciting than others and it depends a lot on the tracks, Matterley Basin for example has been great to watch while in Loket it has been quite annoying with not a lot of action.

GateDrop: Obviously it’s quite disappointing with Mitch Evans wrist injury worse than first thought. I know Honda explored the possibility of a fill in rider and approached Jordi Tixier – is there likely to be a fill during the course of the season or will the focus be fully on Tim Gajser?

Gariboldi: It was really disappointing for us not to have a fit Mitch Evans at the beginning of the season because he showed many times that he could be a podium guy and even being very young he was already in front with the top guys of the MXGP!

We just hope to have him back as soon as possible because he deserves to show what he is capable of on his factory CRF. Honestly we were not looking for a fill in rider because HRC never asked about it, we just had a couple of very soft conversation with riders to explore what was possible and we also received many calls from top riders all over the world to take that place but we decided it was better to focus on Gajser and his fifth title.

GateDrop: Just on Ruben Fernandez, Hunter Lawrence and Mitch Evans showed good things with 114 Motorsports Honda but Fernandez has been very consistent. You must be delighted with his start of the season – did you expect this from him?

Gariboldi: Yes, until the start of the season Ruben was flying under the radars and on all the articles on the papers or the internet he was never considered like a title contender, but then in Russia he showed immediately how he has improved during the winter getting on his first ever podium and then two weeks later he did it again in England taking the red plate in MX2! Ruben is a raw talent and he has huge margins to improve, I see in him the same qualities which have made Tim Gajser great.

Ruben is hungry, is humble, is a fighter and he gives all he has in each race. Like Tim he needs to feel the right atmosphere around him, the right people and this is the most difficult element to offer to a rider; we did it with Tim and now we have done it for Ruben, he just has around him people he trusts; Pere Ibanez, the famous Spanish engine maker who has been working many many years in Yamaha Rinaldi doing the factory engines for Everts and company, and now he is the reference point for Ruben, they speak the same language and Ruben knows where to go when he needs something; Ciro Franzon in charge of the suspensions is another very close to Ruben and Livia Lancelot who has been spending her winter going out training with Ruben and listening to all his needs. 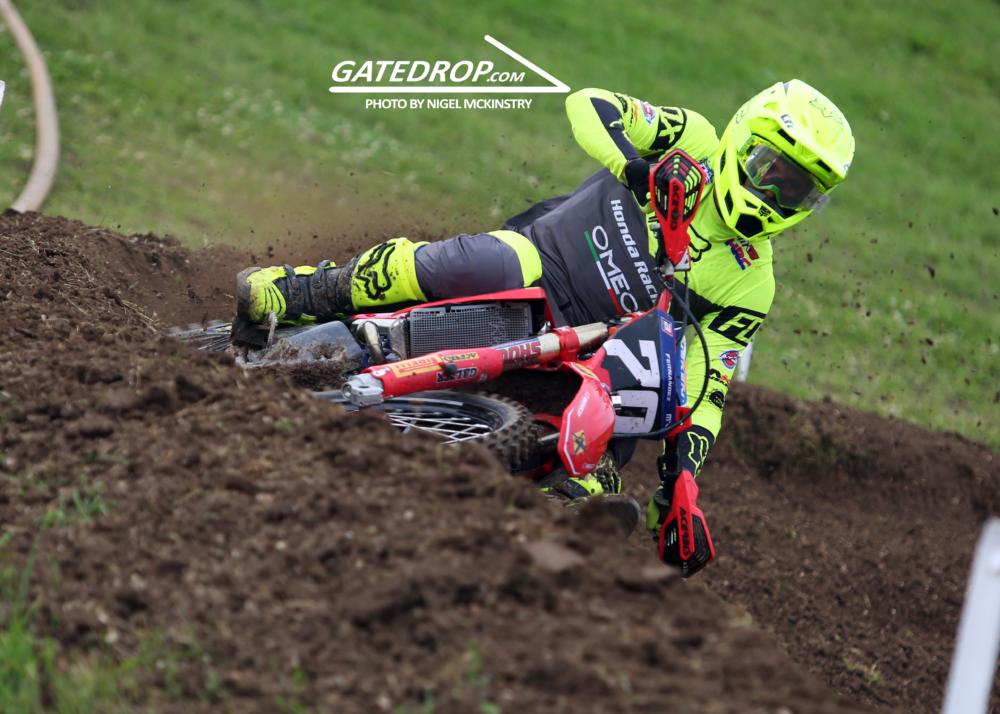 GateDrop: The MX2 Honda setup looks really good this year. Is there anything different or changed much with the bikes compared to previous years?

Gariboldi: Yes, we have improved many points in the last two seasons, with the arrival of Pere Ibanez and Ciro Franzon we have now the full package. Pere is one of the most famous engine makers of the paddock and he has been working two years now to develop the CRF engine and now we have reached a level never seen before on a Honda 250, without forgetting that Ruben weighs around 85 kilos and we have to fight against riders 15 or 20 kilos lighter than him!

In Russia or Matterley Basin on the long uphill’s we could see the CRF not loosing one inch comparing to the factory KTM or Yamaha, that was a great result! On the suspensions side Ciro made a great work during the winter with the set up for the riders and we could see in the first races just how good and stable the bikes were. Beside this the team now has a super crew and Livia is doing a great job on a daily basis with the organisation. Now after 4 seasons I can say that the MX2 Honda setup is at the level I hoped for.

GateDrop: Can you tell me how many years Fernandez has a Honda contract for?

Gariboldi: Yes of course, the fantastic performances of Ruben have hit the fantasy of many team managers in the last two months but I’m proud to say that we have renewed his contract also for 2022 and I can affirm that Ruben will remain with Honda for many years to come.

As I said to him, watching all the top riders of the past and of our days, only the ones who were able to stick for a long time in the same team have got amazing results – Everts, Cairoli, Herlings and Gajser are examples which tell you all! Ruben is happy where he is and knows that Honda will do the best for him to achieve what we all want, another title of world champion.

GateDrop: Joel Rizzi, considering he started the 2020 season in the EMX125 class he’s made a big jump up to MX2 in a short space of time. What did you see in him which made you felt he’d be a good fit and what’s your thoughts on his start of the season? It looks like points are around the corner!

Gariboldi: Yes, Joel made a big jump up to MX2 this season but he is young and he is talented, he knows that we were not expecting anything from him this season and being only 17 he needs to make experience and put many miles under his belt.

What I like from him is the approach he had to the championship, he is trying everything and most important he is finishing all his races on two wheels which was to me the most important thing for him to do this year. In some moto’s he was following some of the top guys for many laps and when he will reach the fitness to last 30 minutes he will start to improve his results. Joel is a work in progress, we just have to wait and see what is capable of in a couple of years time.

GateDrop: Last question. What’s your thoughts on the MXoN during the season? I guess you’d rather GP points are up for grabs otherwise you might not want your riders taking the risk?

Gariboldi: Honestly, I’m worried about having the MXoN before the end of the championship and I just hope they could work out a formula which will be good enough for everybody but I don’t know really which it could be!

Podcasts! We review the Loket MXGP! Take a listen on iTunes here, or Spotify below where you can also see an interview with Stefan Everts on his career via YouTube/Spotify/iTunes – don’t forget to subscribe!