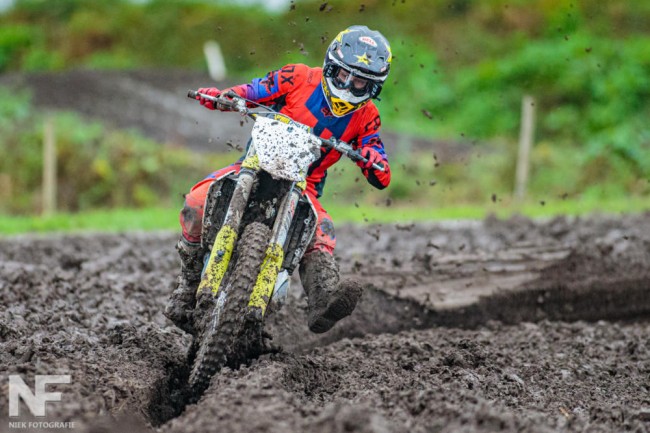 He might only be 14 years old but young French talent, Maxime Grau could be one to keep an eye on in the future. Grau only raced one event this year – his EMX125 debut at Matterley Basin and he was very impressive.

At Matterley Basin, Grau went 8-8 with crashes in both moto’s otherwise he could have been on the podium. Injury shortly before Faenza meant he was injured for the rest of the season which was a real shame after such a strong start to the season.

The Rockstar Nestaan Husqvarna team were on the look out for a new rider with Kay de Wolf moving up to the MX2 World Championship in 2021 and they’ve snapped up Grau to contest the EMX250 series.

We decided to catch up with the French talent to discuss the move and much more.

GateDrop: Maxime, let’s start with 2019 – you finished 5-5 in the EMX85 championship at Loket to finish fifth overall. Where you happy with your performance and what were your expectations coming into the event?

Grau:  The weekend in Loket went well, I was happy with my day.
I dominated the second heat until the last ten minutes where I made too many mistakes and lost places to finish 5th.

GateDrop: This year you decided to move up to the EMX125 championship, how did your winter go coming into the first round of the series with adjusting to the bike etc?

Grau: I had been riding the 85cc since I was 9-years-old so I really wanted to change category, the transition went very well. I started riding a 125cc before Loket – I liked the bike straight away and got used to it quickly.

GateDrop: At Matterley Basin which was your first EMX125 race, you kind of blew me away and surprised me. It should have been 4-4 on the day but some bad luck got in the way. Anyway, 8-8, you must have been pleased and can you talk me through your day?

Grau:  To be honest I did not think for my first year in the 125cc class that I would be fighting for the top 5. In the first race, I rode the whole race in the top 3 before crashing on the last lap with another rider. In the second race, I got off to a great start again, I was riding in the top 4 before going to the ground stupidly in a turn at 2 laps from the end.  So I finished the weekend on an 8-8 for 6 overall.

GateDrop: At Matterley Basin, that was pretty much your first time being part of the GP paddock aside of Loket. How did it feel to be in the paddock and racing the EMX125 class?

Grau: It’s great to be able to ride on the same tracks as the GP riders. I really enjoyed racing in EMX125, the tracks are rough and the are fights everywhere on the track.

GateDrop: Unfortunately, after that race you picked up an injury. Can you remind us of what the injury was and mentally how tough was that for you to deal with?

Grau: I broke my wrist a few days before Faenza during my last training in the south of France. I was really disappointed because I was really motivated for the rest of the season in the EMX125 class.

GateDrop: I believe you’d been working with a former GP rider in the form of Anthony Boissiere – what was it like working with him and how did he help you?

Grau:  Yes I worked for 4 years with Anthony. We started together when I was on the 85cc, it was great! I lived with him for 2 years. Anthony taught me a lot and I was able to improve my riding skills, learn to analyse the tracks and he was a great support at the events. 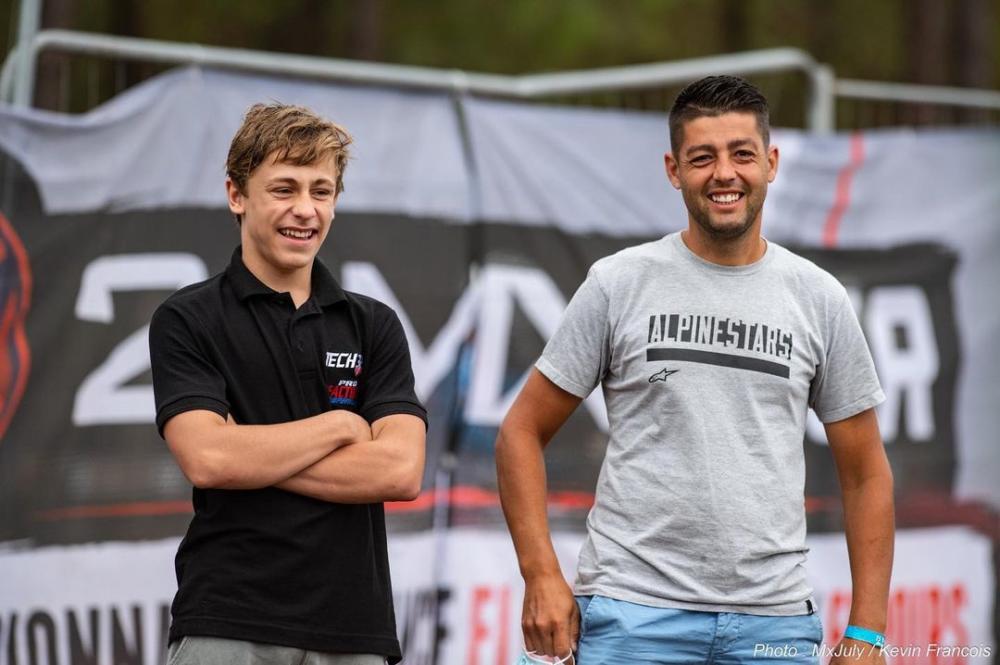 GateDrop: Despite only racing one EMX125 round, the big news for your future is that you’ve signed with the Rockstar Nestaan Husqvarna team for 2021. Just how did the deal all come about and was part of you surprised they approached you?

Grau:  When my agent informed me that I was going to be testing for a team, I didn’t think it was for the official team. I was surprised and of course very happy to be able to show myself to them.

GateDrop: You’ll be racing the EMX250 championship in 2021, considering you were only racing an 85cc last year it’s quite a big step. Was there ever a chance you’d race EMX125 next year and what’s your thoughts on racing the EMX250 series?

Grau:  My goal was really to go up to the EMX250 class in 2021 so I didn’t want to stay in the EMX125 class. The EMX250 series is a very good category at a very high level which I think prepares us well for the GP’s.

GateDrop: You are only 14 years old but I believed you’ve moved to Belgium. How has all that been for you being so young it can be difficult? Who do you live with?

Grau: We moved to Belgium with my family in November. The adaptation is going well and I am living a dream for the moment!

GateDrop: You’ve been putting in the laps on the 250cc for quite a while now, how has everything been doing with the team and your riding?

Grau:  I started riding in November with the team and the team have been great with me. We ride a lot in the sand because I have to progress in this surface. I have a lot of fun riding my 250cc.

GateDrop: Have you done many laps with Kay de Wolf? You must be able to learn a lot from him and what’s your speed like compared to his on the hard pack?

Grau: Yes, I often ride at training with kay. He rides really well in the sand so I have a lot to learn from him. On the hard pack my level is good but I still have to progress in the sand and the hard pack tracks. 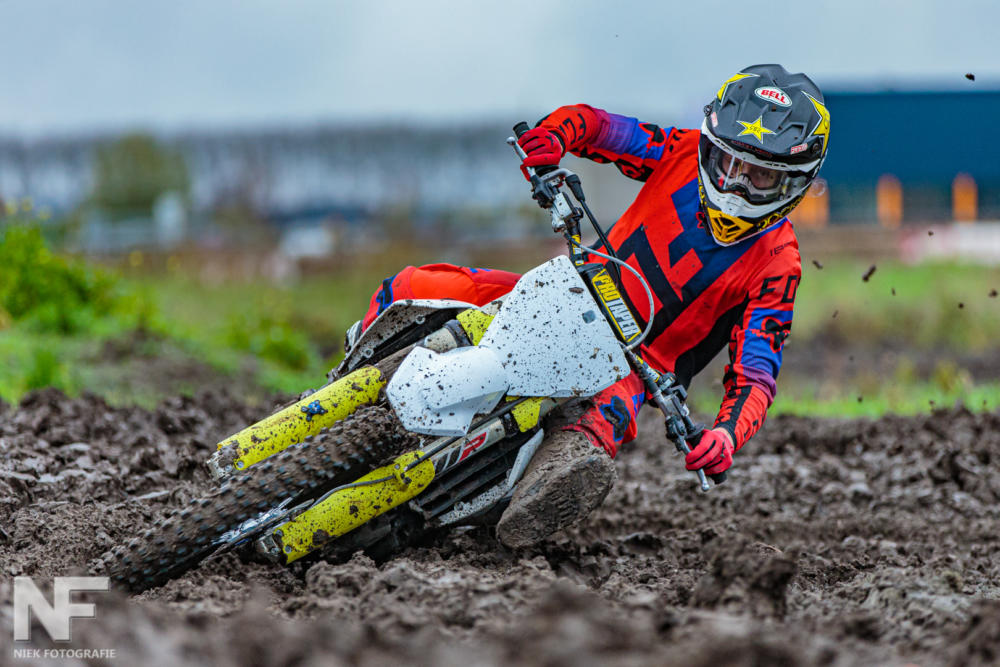 GateDrop: Sand is still the area you need to improve which is completely normal being French. How are you finding putting in the laps at the gnarly sand tracks?

Grau: I wasn’t used to riding in the sand in France but I’m starting to take more and more pleasure in doing a series of laps in the sand on difficult tracks.

GateDrop: You are now working with Rasmus Jorgensen, what’s he been like to work with and how does he help?

Grau: I have been working with Rasmus since I joined the team. He listens and helps me a lot on the bike and in everyday life. I’m really happy to be able to work with him and the whole team.

GateDrop: Heading into the 2021 season, what are your goals for the EMX250 championship?

Grau:  My goal in 2021 is to give my all in each race in order to achieve the best possible result at each event. I am aware that there will be difficult weekends but I am motivated to achieve great things.

GateDrop: Anyone you’d like to thank/anything else to add?

Grau: I would like to thank all the people who allowed me to join this team as well as the team for the welcome they have given me. See you soon in the track.