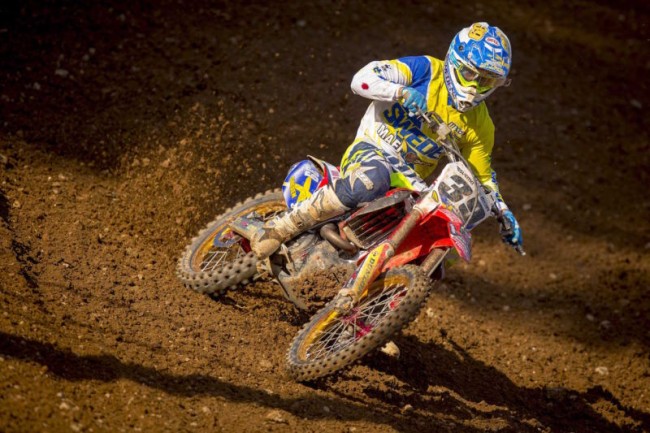 Most European riders go to the US when they’ve made it on the GP scene. Preferably with a world title in their luggage, or at least a couple of GP wins. Sweden’s Fredrik Noren did it his way.

He came to America in 2011, literally and figuratively with next to nothing. Still he managed to make his name as one of the top privateers in the sport. The Monster Energy MX of Nations in Maggiora was the first leg of his European mission. Next up is an highly-anticipated home appearance at the 24MX International Supercross in Stockholm. We spoke to ‘Fast Freddie’ before his return home.

For the MX of Nations Team Sweden worked out of the 24MX Lucas Oil Honda rig and you borrowed one of their bikes. That must have been very different. And it was also your first time racing again after a small break. Talk us through your Maggiora weekend!
Fredrik Noren: “It was a mixed bag really! I only had ridden the bike once before the weekend and that was with the suspension of Ken De Dycker, not my own. That’s because we had some issues with customs getting my suspension in! The qualifying race on Saturday went well though. I finished 7th.  We made some small changes to the bike with different mapping, gearing and changes to the suspension. All of that made the bike a lot better for me. In the first moto I had an okay start, but I lost a couple of places in the first corners so I was 12th in the beginning.  I climbed up to 9th with Simpson and Van Horebeek in front of me. I felt I could catch them but when I got a rock on my goggles that slowed me up. After that I had blurry vision for a couple of laps and I lost some places. Just when I got back into it my throttle tube broke in half. That was disappointing because I had to try and ride around that. In the end I lost 10th to Paturel with two corners to go. But 11th was all right, especially considering how everything went.”

Team Sweden, with yourself Anton Gole and Alvin Östlund looked impressive on Saturday. You guys qualified 9th and top-ten was definitely possible!
Noren: “In the end we finished 13th, just like last year. I felt we had a good team and we had the speed to break into that top-10. Both Anton and Alvin are great riders, unfortunately it was’nt meant to be this year. Hopefully we can come back and make that happen in Matterley Basin next year! For me my second race was a bit rough. I entered the moto feeling flustered. I wanted more from the first moto and that got to me. I had a bad start, stalled it, fell, stalled it a second time… Not ideal but my riding was quite good, my lap times were up there.”

After the Indiana National you had minor surgery to your knee. How did that go?
Noren: “It was nothing major. They cleaned it out, fixed the meniscus up, more like a maintenance thing. I missed a bit of riding before coming to Europe but I had been riding a lot before so I don’t think it affected me too much. The feeling with the knee was fine to be honest. I didn’t feel rusty or anything.”

Fans in the US who haven’t been to an MXON race in person might have a hard time to understand it but the atmosphere, energy and passion that surrounds this race is unbelievable!
Noren: “It is. To race for your own country in this event is awesome. We always have a lot of Swedish fans coming out here to support us as well. Even when I was riding in 18th it felt like I was leading because I could hear the Swedish fans. The Italian fans were great too, and then you have all the flags, air horns, the Bengal lights and crazy costumes! It also gives me the opportunity to see my Swedish family again because I don’t see them all that often. As a rider you also get the opportunity to race against guys you only know from TV so that’s neat too.”

Next week you will be racing at home in the 24MX Supercross, which is a huge event in your home country. They have a state-of-the art track inside the super-modern Tele2Arena, guys like Davi Millsaps, Martin Davalos, Gannon Audette, Josh Hill, Fabien Izoird, Florent Richier are riding there. It sounds amazing!
Noren: “Yeah, to have something like this in Sweden is a great promotion for the sport. Especially because it’s a supercross event. Everybody knows about motocross but to bring such a race in the capital of Stockholm in one of the coolest stadiums of Scandinavia, that’s very exciting. I’m happy that I’m invited to race there. The competition looks strong but I don’t feel any pressure. I would like to be on the podium, do it for Sweden!”

What’s your plan for next year?
Noren: “At this moment, nothing is signed yet. The plan is to do 250 Supercross again, and then 450 Outdoors. But I’m open to any offers out there. I wouldn’t mind coming to Europe and race MXGP for a year. Hopefully we can figure things out quickly. Who knows where I will end up, you never know!”

Many fast riders are currently without a ride in the US for 2017. You’re one of those guys. You had top-5 results in a moto, top-10 overall so absolutely solid, only you were at your best outdoors. That must be a disadvantage.
Noren: “For sure. The teams put most emphasis on how you do in supercross. I haven’t been able to show what I can do in supercross so that’s holding me back a bit. But I’m not going to sit around and be too upset about it. I’ll just go out and do my best. I learned a lot from my previous seasons. So I want to go out and be a contender in supercross as well. I love riding supercross and I’m going to work hard to reach my goals.”

You obviously have a great relationship with Honda, you filled in three years in a row for the HRC-American Honda team.

Noren: “The guys over at Honda are great people and they’re a great company. It’s been good working with them, being able to fill in, do testwork and in general to have their support. I’m blessed with that.”

You have been in America for a while now, you’re married to an American girl as well. Do people still see you as Swedish?

Noren: “At least in Sweden they see me as Swedish! I’m now in the US for three years full time and five years since I first started to go over there. Sometimes I feel like an American, but I’ll always be a Swedish guy at heart. That’s where I grew up.”

What Swedish food do you miss most in the US?
Noren: “There’s not a whole lot that I miss. (smiles) If I really want something I can always go to Ikea! Actually that’s something we do sometimes, or we go and eat there. One thing that I miss – I can tell now because it’s off-season right- that’s the candy! Swedish candy rocks, it’s quite different from what you can get in America.”

Good to know, have fun in Stockholm!
Noren: “Thanks, I will!”