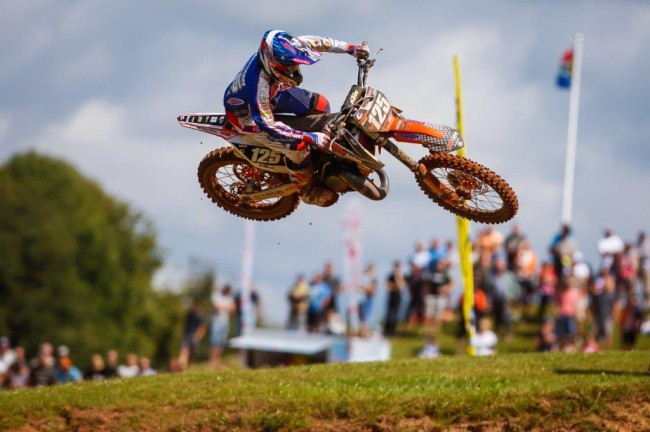 The FIM Jr. Worlds were one of the most anticipated events of the season for the KTM Diga Junior Racing team. After all this is the pinnacle for young motocross riders from all over the world. For once their paddock setup was divided into an Australian and Finnish camp. Young Australian Cody Chittick and Finn Matias Vesterinen gained valuable experience in Estonia and took pride in representing their country at the world stage in the 85cc class. EMX150 champ Emil Weckman left the Lange Moto Center in Tartu with a smile on his face, his ninth place finish in the first 125cc moto had been a breakthrough ride of sorts. We sat down with Emil before his team’s home event in Lommel.

How did the Junior World Championship go for you?
Emil Weckman: “It was a really nice experience for me. I didn’t know what to expect from the track but I actually like it a lot and it suited me well. The facilities, the soil and the layout in Tartu were all really good. Compared to the really tough sand tracks the sand was not so deep, maybe something like Kegums in Latvia.”

You had to go through the LCQ to make the races.
Weckman: “Time practice is one of the areas were I need to improve, that’s obvious but for sure this was not my best qualifying session either! In the last chance race I rode pretty conservative to make sure I got into the motos! I started fifth and stayed consistent because it was so easy to make a mistaker there and went on to finish fourth, the last transfer spot.”

On Sunday you seemed a lot more at ease?
Weckman: “I was 40th on the gate, still I had a really good start from the outside. I got away round 12th position and had a nice race. I finished 9th only five seconds down from the 6th. In the second moto I had another good start, I made it to ninth and collided with another rider… (smiles) Of course I had to go down! After that I regrouped and came back from 20th to 15. I finished 11th overall.”

That must be a good feeling to go into Lommel. It’s also the home race for your team this weekend.
Weckman: “Yeah, Tartu was very positive so I want to build on that. The bike was working really and I was very happy with the suspension. I’m more of a sand rider so I like Lommel but it’s not as if it’s a special place for me… (smiles) Sorry Belgian people! Although I’m really looking forward to ride the modified track, going in the other direction should be interesting. The goal is the same like any other EMX125 round, I want to improve and score points.”

So what’s your favourite sand track if it’s not Lommel?
Weckman: “I would say Assen! The sand is really deep, the setting is very different with the grandstands and the MotoGP paddock but I also like the layout of the circuit. And I won both of my EMX150 titles in Assen too!”