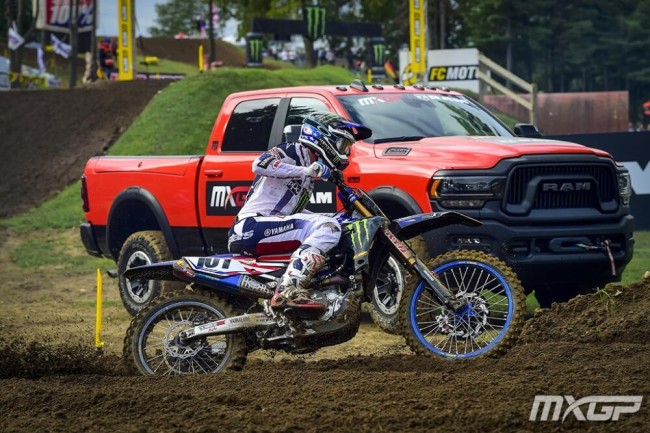 We catch up with Eli Tomac who added the MXoN to his AMA supercross and AMA motocross titles in his final full year as pro!

Eli Tomac you have completed the set, AMA supercross, AMA motocross and finally the MXoN, this must have been a dream year for you!

Crazy awesome year, to finally win this event is so cool, a totally different feel to anything else we do because we are working as a team and you are helping guys out that you normally want to beat all the time so to win that is a whole different feeling, the fans are always on another level here, it’s literally a sea of people up on the podium. There is nothing quite like des Nations.

You had two quite different races today the first one you won but had pressure from Jago Geerts on hos debut in the 450 were you expecting to be pressured that much, especially by him on his debut!

I found out he was fast yesterday when he won the qualifier, yeah, he was pressuring me the whole moto, I didn’t make any mistakes, being in clean air really helped me that moto. I was just trying to lay it down, hammer down.

The second moto was maybe America’s only bad start all weekend, you got into sixth, it looked like you were making a charge at Dylan, but did you just settle then because you knew Chase was third and everything was realativelt secure?

A little bit of both, I settled and looked at the gaps and I was really reading my pit boards, I was like at this point there is not really a whole lot of reason to take too much risk, I knew they would signal me if I really needed to go really crazy.

On this whole season, I don’t think I have seen you as happy even when you were winnign before, is that the bike, the team, or the fact you are seeing your career is coming to an end and just enjoying it?

All of the that! I know my time is coming to an end and I’ve had the dream season, my team, my motorcycle is awesome, everything as one has been great this year.

Jeffrey Herlings, there is talk that you are going to do a one on one with him next year, how true is that and how realistic is it?

It’s probably not realistic but you never what could come of it, it would be pretty fun.

Another question, I think I know the answer, but I know a lot of people would love to see it, and maybe you could bring Chase as well…and race MXGP in 2024 and race against Jeffrey, Tim Gajser, probably Jago Geerts and get a few American GPs on the calendar – any chance of this happening Eli!

(Smiles) For me no unfortunatelty, the other guys you never know! Thankfully we have this race, there is always the question of who’s better so it’s very cool to have this event.

There seems to be a lot more mutual respect the last decade or so between the AMA guys and GP and everyone recognises that everyone is really fast!

Everyone is fast, you think how level the playing field is around the world, it’s cool. The sport is elevating and both sides are elevating so it’s cool to see.

And did you miss racing Jeffrey out there today?!

And finally, you are doing WSX, and coming to Wales are you excited to do that and race a new series?

Cardiff is going to be a totally new thing, I haven’t been to UK at all so I am excited to see it.

And it’s the same language!

Yeah the same language, it’s cool to see supercross there and to see international fans.