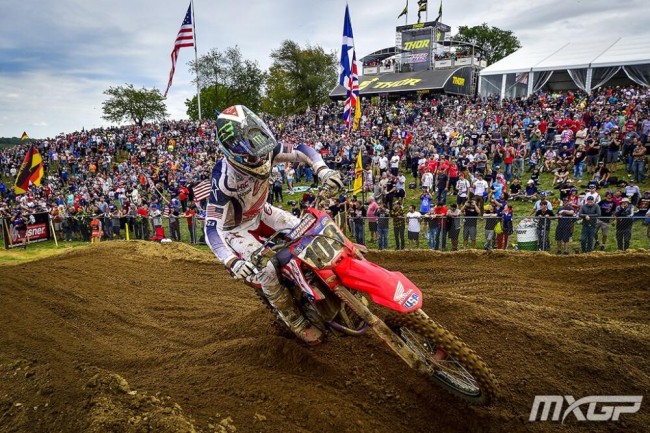 What a weekend at Red Bud. Fast and dry on Saturday, wet and softer on Sunday, the riders were tested in many ways and many will go home happy, not least team USA and the thousands of amazing fans swarming the circuit. This was an epic event yet again in Michigan.

After years of trying Eli Tomac finally got the title he was missing and made it a clean sweep of all titles this year winning the MXoN, Supercross and outdoor. What a year for the American, who is ending his career on a huge high and it was hard not to feel happy for him – and he’s racing WSX in Cardiff in two weeks!

For Chase Sexton with was his home MXoN, his home track, living just a couple of hours away and he admitted he didn’t get much sleep the night before! And, while he didn’t win a race he was in contention for the win both motos to do his job well, but Justin Cooper really set the platform, the man expected to be the weaker link provided the foundation with a super fifth place on the 250 in race two. That was the score that really boosted America and lessened the pressure as other leading teams made mistakes.

America had to deliver and fair play they did just that, great starts, not mistakes and got the job done. They werent always the quickest but they were all quick even if only Cooper won his class but they did what they had to do what they had to do it. That’s the name of the game and something they haven’t been able to do in a decade. They earned it.

But others shone brightly too, not least Jago Geerts! The MX2 runner up beat Eli Tomac to win the qualifer and then almost delivered another moto win in the first moto on Sunday with Tomac and Geerts setting a pace no-one else could match, almost a minute ahead of third. This was an epic debut especially under the circumstances of losing a title two weeks prior. Geerts showed the world just how amazing he is on the bike and the doubters of the level he and Vialle were riding in MX2 have been well and truly silenced.

Two former MX2 riders also impressed, Mattia Guadagnini who started the year in MX2 and ended it in MXGP led race two for 25 minutes under big pressure from Lawrence and Sexton, he eventually finished third but it was one heck of a ride from the Italian and he was pumped when he crossed the line and all smiles when he got back to his team awning!

Maxime Renaux. last year’s MX2 world champ, wasn’t up to his normal level on Saturday and while he rode well in the first moto to third, was nearly a minute back of Geerts and Tomac suddenly sprang into life in moto three and showed amazing composure to hold off Lawrence and Sexton for the win, that was mental strength aligned with speed. And it meant it was Renaux who took the overall win ahead of Eli Tomac on the day. Not a bad achievement. MX2 works.

Jett Lawrence, like Jago Geerts, looks born to ride a 450, very smooth and calm on the bike, Lawrence won his class beating Sexton to go 1-1 with his technique showing on the Sunday in the more difficult conditions. Lawrence said he only spent around a month on the bike and didn’t feel fully prepared with the bike set-up and is already looking forward to Ernee where he feels he will be able to come in more confident on the 450 – and he just went 1-1 in his class!

Liam Everts also deserves a mention, he was fast all weekend long for fourth overall in MX2 despite a crash while on a mission in race one and on de Wolf’s pace at a time when de Wolf was matching Cooper’s pace in the opening moto. Everts was mired in the pack in race two with Marvin Musquin riding well in MX2 as a last-minute replacement for Tom Vialle taking third overall in the class, but if Tom Vialle had raced France would have had an even better shot with the win. Dylan Ferrandis had epic speed too but two crashes meant his speed didn’t reflect the level he was riding at and he was amazing to watch with his aggression on the 450.

So, America finally won again but with the level of Geerts, the MX1 class win of Renaux and Jett showing his 450 form plus Guadagnini running with Sexton and Lawrence there were a lot of winners and the GP boys showed they can be competitive with the Americans even when team USA are on form- but it would have beeb nice to see Herlings, Gajser and Vialle to add to the competition. France and the Netherlands certainly missed their world champion riders.