Interview: Dan Reardon on his Arenacross series so far! 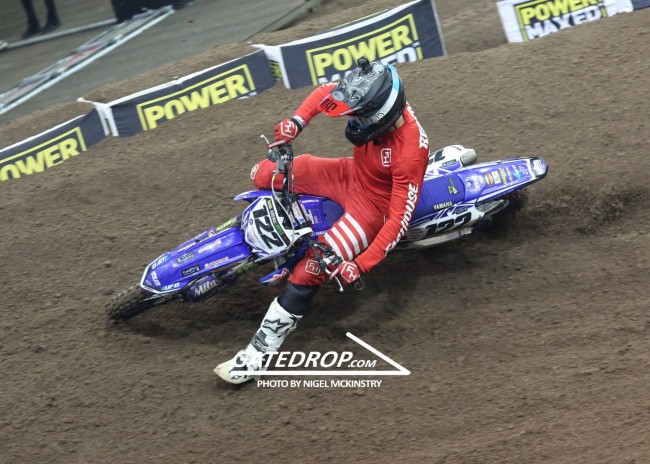 One of the new names in the Arenacross UK series this year is the thirty-two year old Aussie, Dan Reardon who is continuing to improve every single round.

Reardon had his best result of the series so far during the fifth round in Belfast as he came home in second during the main event. With two rounds remaining in the UK series he will certainly be looking to win a main event before the series comes to an end.

We caught up with Reardon to talk about the British series and how it’s all going for the Aussie.

Gatedrop: Dan, we’ve just had two nights of racing in Belfast. Can you talk me through both your finals?

Dan Reardon:  Yeah, the entire weekend we have been fast and the bike has been good. There’s been a lot of woulda, coulda, shoulda’s in this championship for myself. I’ve definitely got the speed and I think people can see that. Unfortunately, every single main event I’ve put it on the ground and a lot of it is my fault. I’ve just been trying to make passes and save time as quick as I can but unfortunately, I’ve been going on the ground.

Tonight’s (Saturday) focus once I got into the main event was just to hold it together and be a little bit patient but you can’t really, you only have fourteen laps and it’s not enough time when you make a mistake or go down. We did what we could with the time that we had and second place, I’m happy just with the fact we made it through a main event.  It’s good for us, myself, the sponsors and great for the team.

Gatedrop: Just on both the nights. They obviously changed the track, I personally thought on Friday the track was fairly basic but it was a bit more technical and probably more to your liking on Saturday. How did you find the track changes?

Dan Reardon:  Yeah, I totally agree. I don’t like it when the tracks are basic. They’re way too basic and especially compared to what I’m used to and everything like that. Tonight was basic too but it gave us an opportunity to create some passes and that’s what we need you know. Those 180 turns allow us to get up the inside of somebody and that’s what we need for better racing in my opinion. Both not so great but happy to walk away.

Gatedrop:  Obviously you’re more used to AMA Supercross and Supercross back home in Australia. Just how different is British Arenacross and what advice would you give to any other Aussie’s coming to do this series in the future?

Dan Reardon:  It is a lot different. You’re dealing with a twenty second lap time, I would say starts are 95% of the race and some tracks are near impossible to make passes so practice your aggression. You need to set your bike up for a small track and be prepared to swap some paint.

Gatedrop: From the first round to now, it looks like you’re improving and getting the hang of the smaller tracks every week, you must be looking to win one before the series finishes?

Dan Reardon:  Yeah, for sure. I’m still struggling with the grid that’s behind the gate and trying to get used to that. The small tracks are just about having the right bike set up and being comfortable. Sometimes it’s about understanding that the biggest line or the most technical line isn’t the quickest and that’s a hard pill for me to swallow because that’s what I’m used to.  I just need to figure out the quickest line, whether it’s the basic one or not and putting in some solid laps together.

Gatedrop: Cedric Soubeyras recently called you Mr Kangeroo in a recent interview on MXLarge, what would your reply be to that?

Dan Reardon:  Ah you know, I think it’s stupid. I’ve seen some of his riding over the years and I tell you what. What I did and what I have been doing has just been clean aggressive racing. I don’t take anyone out unless they deserve it and at the end of the day I’m just upset he’s got Kangeroo wrong really.

Gatedrop: Have you got any plans to do any rounds of the AMA Supercross series once the Arenacross UK series finishes or is it all still up in the air?

Dan Reardon:  Yeah, it’s a little bit up in the air. I do have to head to the States at some stage and do some racing over there but at this stage nothing is confirmed. We will just enjoy this while we can.

Gatedrop: Would you consider coming back and doing the Arenacross UK series again after this series is over?

Gatedrop: You’re with the I-Fly JK Yamaha outfit. How has everything been going with the team?

Dan Reardon:  The team is awesome. You know the whole crew and everyone involved. Not just everyone you see in the pits but the ones on the outside too. It’s actually been a really fun UK experience so far.

Gatedrop: Would you consider coming back and doing a few outdoor races for the team?

Dan Reardon:  No, I’m just not interested in doing outdoors. Not at that professional level, I’ve had my time. I’m thirty-two years old now and Supercross is where it’s at for me.

Gatedrop: I do believe that team have asked you to do a few MXGP races for them, is that something that wouldn’t interest you and what’s your opinion on that series?

Dan Reardon:  It’s hard for me to say as I’ve never done it so I don’t know but no I won’t be doing it.