Interview: Chase Sexton on his MXoN debut and USA taking the win 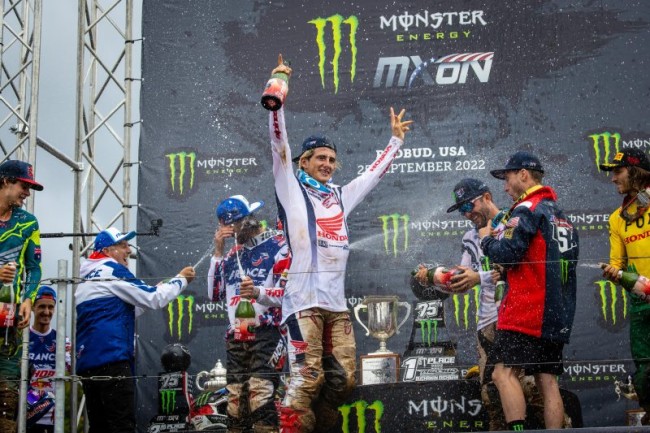 What a weekend it was for Chase Sexton who made his MXoN debut at home track, RedBud. It had been eleven years since America last won the event but Sexton was able to win the event at the first time of asking.

Consistent, fast and smooth, Sexton played a key role in America’s success and after just missing out on the AMA Nationals 450cc title – it was nice he could end the season on the top step of the podium.

We caught up with Sexton to discuss his weekend, taking the win with Team America and more.

GateDrop: Chase, it’s been eleven years since America have won this event, winning it here in front of your home crowd at a local track… just how did it feel to stand on the top step of that podium?

Sexton: It feels good. With it being my first year on the team, it was a lot of pressure being on the team and we were expected to win. I didn’t get a lot of sleep last night but I am glad we could get it done and in the wet conditions anything can happen. I am stocked on the day and stocked with our team. Now I am looking forward to the years to come and keeping USA at the top.

GateDrop: What was your thoughts on the track? Day one I didn’t think was technical at all but some rain and it was more technical for the race day, did you enjoy both days and did you make many changes to the bike overnight?

Sexton: Yeah, honestly yesterday the track was more normal to what we are used to but it was a lot drier than what it is in the summer. It was choppy and fast, I was honestly struggling a little bit but coming into today, the wet conditions didn’t make it any better. The first moto I didn’t ride very good but the second moto was a lot more like myself. I did make a few bike changes which helped make me feel more comfortable so that was good.

GateDrop: An AMA National is very fast, you get like 4 laps each practice then straight into a race with little time between each moto’s. What was your thoughts on the two day format, did you enjoy it with a lot of riding or would you rather the AMA style format?

Sexton: I actually liked the two days. I think it gives you a bit of time to break down the track, in America we are just so used to a one day thing, you are there and in and out really fast. It was cool to kind of enjoy the weekend and obviously with it being here at RedBud, I stayed at the track this weekend which was cool. I was happy we were able to come out on top, I did like the two format and I think it’s cool. It is something I’ve never got to do before. 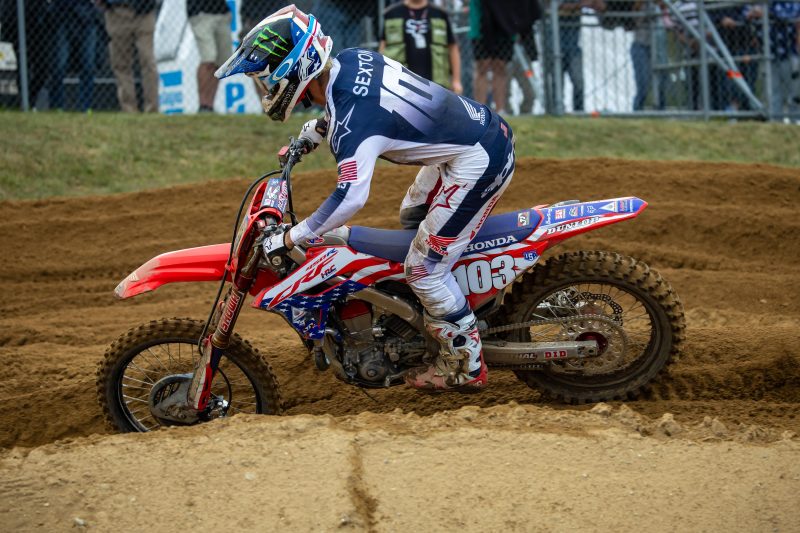 GateDrop: A lot of these riders you were racing against for the very first time, was it nice racing against new competition and some of the MXGP riders – Maxime was very fast in that last moto as well!

Sexton: It was good. Renaux was riding really good in the third moto, I honestly felt I had a little bit more speed and especially midway through the moto. I thought I had good lines but it was hard with the track and the lines. I didn’t want to do anything dumb like yesterday and throw it away so a little bit of caution but obviously he rode really well, you can’t take anything away from him. Hopefully we get another chance next year in France.

GateDrop: I actually really enjoy watching you ride and your style, somethings I forget you are actually American because you ride more like an MXGP rider… is that something you have looked at or who did you look up to in terms of riding styles you try to take from someone?

Sexton: I think I try to take a little bit from everybody. I think it’s a good thing that I ride more like those guys because it’s only going to help me in the future. I really do hope actually that in the future I could come over and race MXGP. I don’t know if it is going to be a possibility but this weekend seeing how professional it is and how everything is ran, it’s really cool. I wish there was a little bit more of a connection between Supercross, AMA Motocross and MXGP, that we could all come together and race each other. Maybe towards the end of my career I will come over and race MXGP.

GateDrop: I was actually going to ask you about possibly coming to race MXGP in the future so it’s good to know it’s on your mind. Travelling the world seeing different cultures and countries, is that something you’d enjoy as well as racing against the best Motocross riders in the world?

Sexton: I think that would be cool going to different countries. We obviously only race in the States so I would really enjoy that. I think to go over there, you would see a lot more people, different fans – not that the USA fans aren’t good but you see so many different cultures which is one thing I would hopefully like to explore. I want to win a Supercross and an outdoor championship here before that so that is my main priority right now but like I said, I’d like to get over there and race. 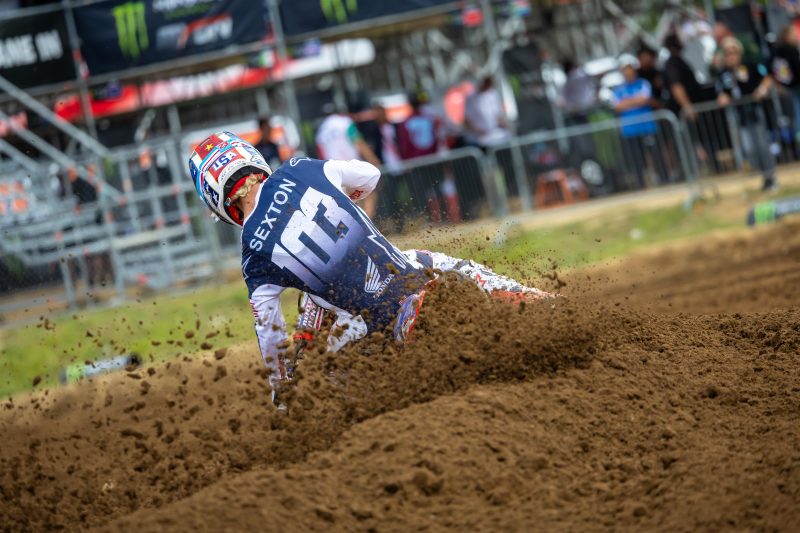 GateDrop: You mentioned earlier there about having more of a connection between AMA and MXGP, I’m not sure if you have heard but in 2024 there’s plans for an AMA and MXGP race to happen – the top twenty of each class will go up against each other, that should be a cool event and would that be something you’d like to race?

Sexton: I didn’t know that! I thought it was cool and that last moto MXGP and the open, it was cool to race the big dogs. If that race was to happen, I would really look forward to it – I didn’t know anything about it until now but I’d be excited for it!

GateDrop: Looking ahead to next year, when it comes to the outdoors, you are going to be one of the favourites with Eli being on an SX only deal… was it good seeing Jett be that fast this weekend so you know you’ll probably not get it all your own way now, is that good for the motivation?

Sexton: Yeah, although I mean I knew Jett was going to be good on the 450cc and especially in those conditions. Yesterday with it being drier we had a bit of advantage but with it being wet, I knew he would be good. In the second moto, I still thought I had better speed but I tried to be smart and not be an idiot, that was the main priority. To win as a team was the goal and next season, I think it’s going to be fun. Jett is young and fast so I am looking forward to that challenge.

GateDrop: Just on the MXoN next year, if you do get selected, will you make the trip over? We love to see the best American’s race and it is a bit frustrating when they don’t come – will you come?

Sexton: Oh if I get picked I am all in. Hands down, this race is really cool and I think for me it is only going to help me grow as a rider.  I am all in.

GateDrop: Obviously we didn’t have Jeffrey Herlings here due to injury and no Tim Gajser either, are those two riders you look forward to racing against in the future (hopefully in France next year!)?

Sexton: Definitely. I want to race Jeffrey and I want to race Tim. They are very experienced riders and Jeffrey is obviously one of a kind. I think I would rather race them and take them on at a clay track for sure because that’s more my strong suit. Even RedBud, I grew up around here but it’s never my strongest track so I am looking forward to next year and racing them on a clay track. I think I have what it takes but I am excited to race them as well.

Get our Red Bud review below: