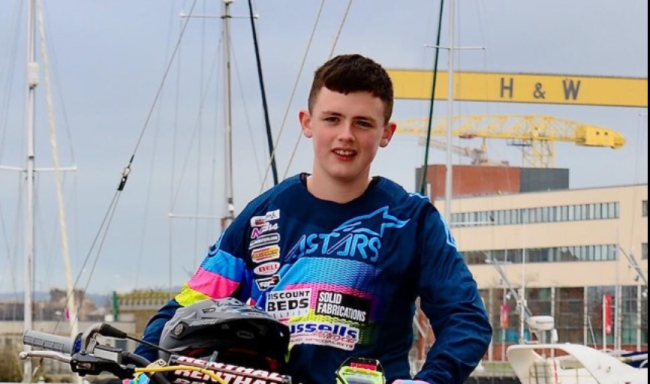 Young Irish rider, Charley Irwin isn’t a stranger to the Belfast Arenacross event as he got his feet wet in 2017 and finished third overall in front of his home crowd and calls that his best achievement so far.

Irwin is gearing up for this years Belfast Arenacross as he’ll contest the Supermini Cup this year. Not only will he race Belfast but he’ll also race the other four rounds taking place in England.

We caught up with Irwin to get his thoughts on the event, plans for the future and more.

Gatedrop: Charley, for people that might not be aware of you, can you give me a bit of background about yourself and how you got into racing?

Irwin: I started racing because when I was little my dad, his mate and my sister had bikes. My sister raced and I was always at the tracks and loved bikes I got a PW50 and I had to wait until I was 6 to race.

Gatedrop: In terms of your short racing career so far, what’s your best achievement been so far?

Irwin: I would say my best achievement so far is probably 3rd overall at the Arenacross UK series in 2017.

Gatedrop: In terms of the youth racing at home, are you a fan of it, do you think any improvements could be made?

Irwin: I’m not a big fan because it’s always at the same few tracks and there isn’t as many riders.

Gatedrop: Do you watch much racing on the TV and does it make you want to race all over Europe? Have you thought about contesting the EMX championships?

Irwin: Yeah, I watch the Europeans all the time, watching riders like Kay de Wolf and Liam Everts makes me want to have a go at racing the EMX championships, hopefully I might get to a few this year.

Gatedrop: I believe you will race the entire Arenacross UK series, what’s made you decide to do them all and you must be excited?

Irwin: I love Arenacross tracks because I love the big jumps and the atmosphere in the stadium’s. I’m really excited and can’t wait to get started In Belfast.

Gatedrop: What’s your expectations for the Arenacross UK series?

Irwin: I’m hoping for a top 3 finish. I’ve been in Wheeldon and I’m feeling really good on the supercross track.

Gatedrop: You’ve spent a number of years on KTM, but looking at your social media it looks like you’ll switch to Yamaha for the season ahead. What’s the reason for that and how are you finding the Yamaha so far?

Irwin: Yes, I’ve been training on the Yamaha 125 because I was going to move up this year. I feel comfortable on it and enjoy riding it but unfortunately I’m not 13 until May so I can’t move up just yet. I’m riding my KTM 85 at the minute and feeling good on it after riding the 125 it’s like riding a pitbike.

Gatedrop: When it comes to the Motocross season, what’s your plans for 2020?

Irwin: I’m entered for the MX Nationals series for 2020 and hopefully will get a few rounds of EMX in. I’ll just be doing a few chosen races at home and after May if I’m too big for 85 I’ll move up to 125

Gatedrop: Growing up what Motocross pro’s do you look up to the most and why?

Irwin: Ken Roczen because he was so young on a 250 and won the world championship in MX2. Also, Jorge Prado because he’s only 19 and has already won so much.