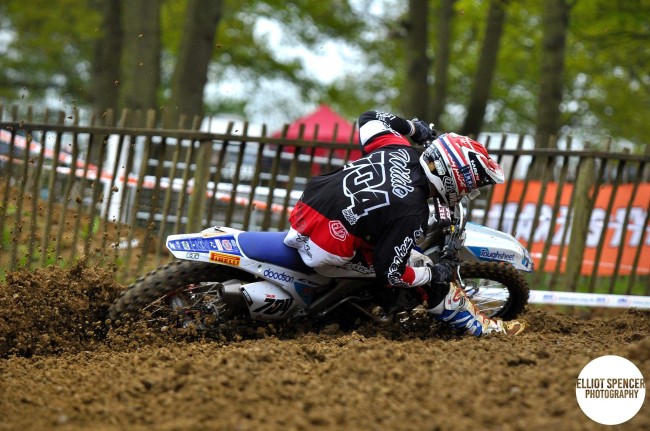 Ashley Wilde has had a breakthrough season in 2015. Finishing eighth the British MX1 championship with a career best moto result of third in a moto at the final round at Fatcat, Wilde has been quite rightly been rewarded with a move to Yamaha’s official British championship team, Geartec Yamaha.

It’s a great opportunity for Wilde to take the next step in his career after years of hard work to get to this level. So Gatedrop thought it was an ideal time to catch up with Wilde to talk about his impressive season in the Brtish championship and the opportunity he has with Yamaha in 2016.

Gatedrop: First of all congratulations with the Geartec ride. You must be over the move with the deal?

Ashley Wilde: Yeah, I am really happy to be joining the Geartec Yamaha team and looking forward to a great season.

Gatedrop: You have ridden Yamahas before so the bike should suit you pretty well..

Ashley Wilde: Yeah, I really like the bike.  It’s a great bike and it’s been proved all around the world how good it is.

Gatedrop: You really stepped up this season.. did you change anything before coming into the season?

Ashley Wilde: This season went really well, luckily through the help from Toughsheet I was able to go full-time. Going full-time was a big change, I was able to ride more and obviously train more. During pre season I worked really hard to get to where I needed to be, then through the season I had a very strong programme that I stuck to. I have learnt a lot this year that I have took on board to be better next year.

Gatedrop: You must be excited to have the opportunity to work with Rob Hooper next year?

Ashley Wilde: Yeah, it’s a great opportunity and I’m very excited to be working with Rob. He has a lot of knowledge about the sport and also builds a great bike!

Gatedrop: Does this season give you the confidence to do even better next year?

Ashley Wilde: For sure, like I said I have learnt so much this year that I already know I can be better next year. The last two rounds of the Maxxis this year I shown what I can do so I will be working hard to do that all season next year.

Gatedrop: How did you find the British GP you showed good pace there. It must have been good for your confidence..

Ashley Wilde: The British GP was a great experience and one I will remember forever. I did ok, I still feel like I had more but the nerves got me a little bit. It’s a shame Sunday got cut short due to crashing, but that’s racing!

Gatedrop: As EBB is your team-mate next year you will be able to ride a lot with him and learn a lot..

Ashley Wilde: Me and EBB have been good friends for a long time now so I think next year will be really good. Hopefully we will ride together a bit and push it each other on. It’s also cool having a team-mate that’s a good pal!

Gatedrop: What sort of support will Geartec be receiving from Yamaha?

Ashley Wilde: I’m not too sure, all as I know is we are the official Yamaha team which is great.

Gatedrop: You have been working with Richard-Mike Jones. He seems to have helped you a lot..

Ashley Wilde: Yeah, RMJ has helped me a lot over the last 4 years. It’s been a long road to get to where I am but we finally got there after a lot of hard work. We are good friends now but when it comes to riding he’s still really hard on me.

Gatedrop: I saw you were at Assen to watch this year.. have you got any plans to ride any European MXGP rounds next year?

Ashley Wilde: I was out training in Holland the week before with RMJ and decided to stay and watch some of the other guys in RMJ Pro Academy who was racing the European classes. I’m glad I decided to stay as it was a really cool GP. I was pretty gutted to be not riding.  The plan for next year is for both me and Ebb and the team to do some GPS which will be awesome and something I’m really looking forward to!

I would just like to take this opportunity to say a massive thank you to Rob, Paul and Yamaha for giving me this great opportunity and also my personal sponsors for sticking by me! Toughsheet, Dents8, Sandbach Scrap Metal, sprint motors, CTi, RMJ and my Mum and Dad.