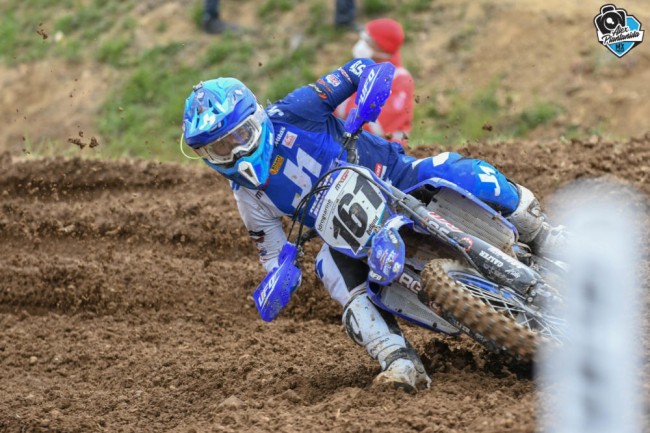 After aging out of the MX2 World Championship last year, Alvin Ostlund was on the look out for an MXGP ride and in the end inked a deal with the JK Yamaha Racing team. We might only be three rounds into the season but so far, Ostlund is having a good one despite the three tracks being slick and hard pack.

The Swede is consistently picking up points in what is a stacked MXGP class and is knocking on the door for top ten results which is impressive as a rookie.

We decided to catch up with Ostlund to get his thoughts on MXGP and more.

GateDrop: Alvin, you’ve made the jump up to MXGP this year. You signed a deal with the JK Yamaha team coming into the season, how did the deal all come around?

Ostlund: The deal came about quite late but just before Christmas they took contact with me and asked if I was interested. I went down to Italy and tested the bike and felt good straight away. The next day I signed the contract with the team. Thanks also to Leif Nilsson who helped me get in touch with the team!

GateDrop: When you first jumped on the 450cc JK Yamaha how did you feel on the bike? You weren’t the most aggressive 250cc rider so you probably suit the bigger bike more?

Ostlund: I did a lot of hours on the 450cc already last year in training just to prepare for this year so I was used to the power and I knew it suits me good.

GateDrop: Of course Yamaha machinery isn’t a stranger to you as you’ve been with Yamaha in MX2 – how was it to be back on a Yamaha but a 450cc?

Ostlund: I was 7 years in a row on a blue bike earlier in my career so it felt like home the first laps.

GateDrop: Russia went well for you going 14-14 on your MXGP debut at a sketchy hard pack and slick track, you must have been happy with how round went for you at maybe not your favourite kind of track?

Ostlund: Round one was very good for me. I haven’t been the best on those kind of tracks before but I have been working a lot on my hard pack skills to improve there and we can see that in the results as well!

GateDrop: Matterley Basin didn’t go quite as well but the track was very fast and not so technical, that probably didn’t suit you?

Ostlund: At Matterley Basin I did a good first moto in 19th with good lap times. In the second race I had a bad start and a crash after a few laps and then I was to far behind. But yes, I struggle a little bit more there with the high speed, I prefer more technical tracks.

GateDrop: Maggiora was a lot more technical and hard pack. A good weekend going 13-15 – you must have been happy with how the weekend went for you?

Ostlund: Yes, of course I’m happy with that. I was close to a top ten position in the first moto and did a solid race two in the muddy conditions.

GateDrop: After years racing MX2, how does the MXGP class differ and how do you find the class? It seems super stacked this year!

Ostlund: Yeah sure it’s a stacked class and it is every year, its super cool to be there and battle with all the big names. But I don’t find it much harder than the MX2 class, in my opinion MX2 is much more crazy the first laps than MXGP. They are more experienced in MXGP and they know some risks are not worth taking.

GateDrop: Out of the next four GP’s, three of them are sand rounds – you must be looking forward to that?

Ostlund: I am really looking forward to the next races and to try keep improve in my riding and results.

GateDrop: Looking ahead to the rest of the season, what’s your goals moving forward?

Ostlund: The goal for the rest of the season stay the same for me and it is to get closer to the first guy in the class.