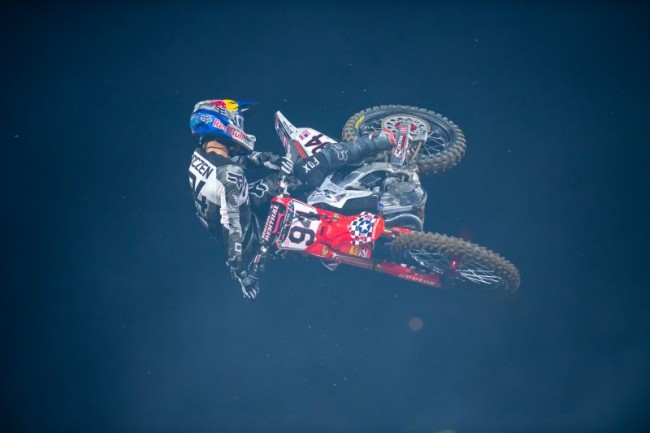 Adam Bailey is the managing director of SX Global, the promotional body responsible for rejuvenating the offical FIM-backed World Supercross championship that kicks off this October in Cardiff with big stars and big prize money!

We caught up with Adam to get to know more about the series, the direction it will take and what British fans can expect to see in Cardiff.

This whole series is a big step in a new direction. How long did it take to come up with the idea/format and then finance for it?

Overall it was a six month process, from when we first heard that Feld were going to hand the rights back to FIM, to when we actually secured the rights and our funding partnership with Mubadala Capital. We have had aspirations to expand from our events in Australia and New Zealand into other regions such as Asia and the Middle East, for a few years prior however; the possibility of promoting the official FIM World Supercross Championship however, put the plans into overdrive!

Getting Ken Roczen and Eli Tomac for Cardiff is huge. Did you feel you need those guys to really legitimise the series and in turn impress them and their peers for what will come in the future?

At the core of our mission, is providing incredible entertainment for fans, around the world. To do that, you need the world’s best athletes. Luckily for us, Eli, Ken, Justin Brayton, Cole Seely, Max Anstie and so many other incredible riders are excited to compete in new cities and countries and showcase supercross to fans that have never seen it at a World Championship level. We absolutely intend to demonstrate to all of the teams and riders at the same time, the elevated level of professionalism we aim to operate and our commitment to celebrating them the way they deserve to be.

What made Cardiff the choice for the opening round – it will have a lot of eyeballs on it globally!

We have invested a lot in market research to uncover regions around the world, where we feel the population already does, or is likely to have an affinity for supercross and could be converted into fans. In addition, Principality Stadium is an incredible indoor venue, so it’s a perfect one to launch the World Supercross Championship. My family is all Welsh also and I have many cousins there, which is just an added bonus that makes me even more excited personally.

Why is the start date June for next year?  Will the AMA guys have enough recovery before the world series starts?

That’s definitely a consideration and is being discussed. The reasoning for having the series run between June and November, is to remain ourside the AMA Supercross Championship and as many other domestic supercross championships as we can, whilst still giving us a large enough window to have a legitimate, truly global supercross championship. There’s a lot to consider when you’re operating globally and finding venues in marquee cities around the world, whilst considering their seasons and weather as well as other major stadium sports such as Football and NFL.

Have you had any conflict with the US National promoter’s as it’s their series that may lose riders who want to do sx only all year long? MXGP might not be as affected but who knows!

Not direct conflict no. We’re 100% focussed on ourselves and what we have set out to achieve. We’re firm believers that this new World Championship and our investment in it will benefit the entire sport and industry, including the domestic championships in USA.

Do you feel this format plus the impressive prize money is sustainable for a number of years? The world sx series was good in the mid to late 90s but it didn’t last and didn’t get to the level of the AMA series. What do you feel will give this the edge over that era?

Our approach is completely different. In particular the model we have created around the teams and licences. Previous attempts weren’t able to succeed long term, but the teams and riders competing were ultimate still funded from US based budgets, which of course meant racing overseas did not make sense for the brands involved. Our model is that the teams should be able to become commercially successful regardless of the input from the manufacturers and if anything the reliance on this, is much less.

Also, the world is a much smaller place now. Thanks to the internet and digital content, there are now millions of supercross fans around the world, that have not had a chance to see it in person. We’re going ensure we deliver world-class supercross and an incredible entertainment spectacle.

Is the plan to make this the premier series over America – and will there be US rounds in the future alongside Europe, UK Asia?

From an outside of USA media perspective, it’s exciting to have the prospect of the top supercross stars in a prestigious series going around the world, especially when we can see them on our doorstep in the UK. I’m sure that goes for a lot of fans/media globally too with guys now coming to their patch to show their skills. Is that global nature for fans, media and manufacturers the USP that can make this work even though the sport has always been seen as a predominately US sport?

We believe so, absolutely. As I said, supercross was born in the USA, but we feel like it’s time to elevate it into a truly global sport and give fans all around the world, the opportunity to enjoy World Championship supercross in their home city.

Did you consider getting involved in MXGP or is that a future goal alongside InFront? Prize money is an issue there but you guys certainly have that covered in world supercross! Or could a Herlings etc be tempted to do world sx in the future instead?

Our goal is 100% on building the World Supercross Championship and that has been our sole focus since the opportunity presented itself. Absolutely we’d love to have Herlings come and race our championship, that would be amazing. I have no doubt he’d be extremely competitive at supercross.

Do you see factory teams coming on-board in the future? And was it hard to convince teams to get involved in the inaugural version in 2022?

Our model isn’t to have ‘factory’ owned teams as we specifically wanted private owners of the racing licences. I’m already aware of manufacturers considering offering factory support to multiple teams for 2023 and beyond, which would be great. We’ve honestly been overwhelmed with team interest and some really tough decisions have had to be made, but I’m really proud of the group we’ve ended up with.

For fans going to Cardiff, what can they expect in terms of format. How will it be similar/different to an AMA supercross?

The formats will be announced soon, but I can say, that it will be completely different to AMA Supercross. Everything we are working on, is to ensure an incredible entertainment package and intense bar to bar racing. I’m positive we’re going to achieve that.

Paris supercross aren’t involved this year but from the outside it would seem logical that Cardiff and Paris would be ideal for the European swing of the series going forward?

Never say never. France is definitely an important region for supercross, but there are many great regions in Europe that are interested in hosting events in 2023 and beyond.

Will there be TV/Internet package like mxgptv available for fans to watch?

Yes, absolutely. There will be a global television package and an OTT streaming platform package to be announced in due course.

Promotion wise for Cardiff, I think it’s already been advertised on Sky Sports, will you be trying to get more mainstream coverage like Talksport radio? It’s something dirt bikes have never really had in the UK!

We’ve partnered with Live Nation in the UK who are the largest concert promoter in the world and incredibly experienced in the UK. We’re confident we have a great plan of attack and absolutely hope to attract new fans to supercross – that’s the plan!

Chad Reed had always been an advocate of a true world supercross championship and has been apart of promoting as well. Will he be involved or his advice sought on this venture?

I am quite close with Chad, so in short, yes he has been called on for input, quite a lot. As have many other ex and current pro riders. I’m yet to find a rider that doesn’t think a genuine world supercross championship is great for them personally, and the sport

We wish you all the best with it all and can’t wait to see it in person in Cardiff!

Thank you so much for your support. We can’t wait for October 8, to show everyone what we have been working on.