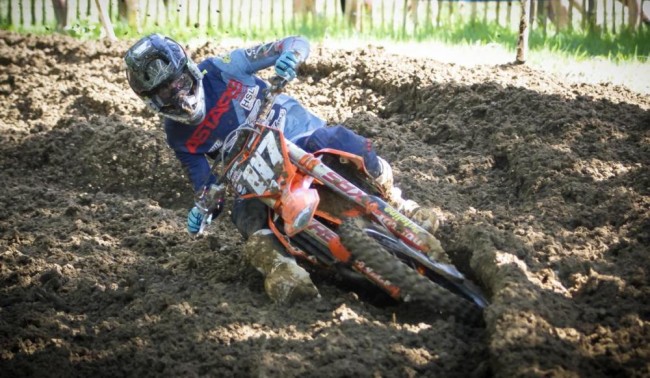 A privateer rider that’s really impressed in the MX2 British Championship this year has got to be Ike Carter as he’s been a regular front runner in the series and has certainly surprised people with his speed. Carter says he wants to be a consistent top five rider but that so far he’s happy with his season.

“This year my plan is to do British championship and the EMX250 series. This is my first year in the pro class and I’ve already been close to winning a race as well as being top three and had some top fives so I’m happy with how it’s going at the moment.  I would like to be a consistent top five rider but so far so good”.

“I’ve put a lot of work in physically training with my trainer Justin Morris so I feel good on the bike, I know my speed is there and I’m just putting it all together now. I expect top five finishes in the MX2 British series and I want to be in the top ten of the EMX250 series”.

Carter is a privateer so it isn’t easy running with GP riders and GP equipment but he’s done a great job so far and has put himself in the shop window to secure a ride for the 2022 season. He will make his EMX250 debut at Matterley Basin this weekend which will be a great experience for him.

“Yeah it’s a full privateer set up this year. It’s not easy battling with the big teams and factory bikes but me and my dad do the best we can to make the bike as good as it can be for when I race. I have a bunch of good sponsors around me who help massively like, Phill Hollamby, Jkflatroofing,  Bob Buchanan, Challanger Scaffolding, Youngbrotherstransport, Newapproach, Progreenmx, Justin morris, Store114, Jordan Booker, PW Home Improvement, Brad Sharpies, Karl Anderson, Oakley Ridders, Pinnaclepocketbullys, Putoline UK, Ci Sport and Steve Sheperd. I am racing the EMX250 class for the first time in my career this weekend and I’m really excited especially it being at Matterley Basin. I feel really good on the bike and I plan to surprise a lot of people”.

“I’d like to do as many EMX250 rounds as possible but without any help from teams etc, it’s not cheap to travel for some rounds so we will see but I definitely plan to do a few this year”.