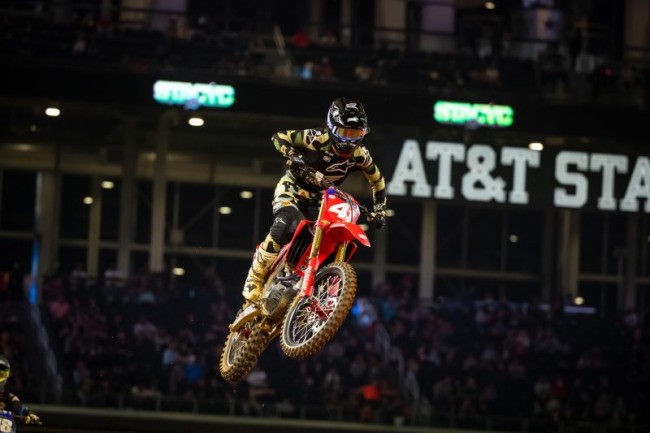 Hunter Lawrence had a big crash at Arlington 3 but it could have been a lot worse! After going off track he managed to still come home in fifth for a decent result.

The Aussie is thankful that the nets were there to save him and the bike to still come away with a solid result.

“I had a bittersweet ending here in Dallas. It was a pretty good weekend, getting second in the heat race, but a bit of an unfortunate ending in the main. I was riding well in third, pushing and pushing, but I kept getting caught up with lappers. I felt like I was catching the guys just inch by inch, and I pushed myself but made a mistake. I landed on the far righthand side of the berm, where they built a little lip into it. It was a pretty harsh landing, as I’m sure the videos show, with me ending up in the net. I’m so thankful that the nets were there to save me and the bike so we could finish and bring it home in fifth. It was good considering what it could have been with the crash. Coming into Arlington, we were in fourth and 16 points down, but now we’re only six points behind. Having the red plate and then passing it on is a bit of a bummer, but we’re still in it. I’m looking forward to two weeks off now to regroup and come back swinging in Atlanta. I can’t thank the team and everyone enough”, Lawrence stated.